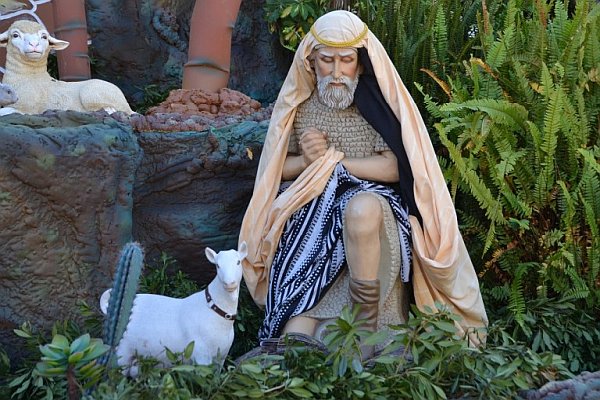 Christmas is a necessity. There has to be at least one day of the year to remind us that we’re here for something else besides ourselves. ~ Eric Sevareid, CBS News journalist

Last weekend I came across a book in my dusty old archives, a book that had touched me deeply in my youth. And one I hadn’t read in over 25 years. It was “The Shepherd” by Frederick Forsyth.

So I read it again, twice in fact. And again, I was totally enchanted and absorbed by the author’s spell-binding talent for story-telling. It’s a work of fiction, but based on Frederick’s real life adventures as a young British Royal Air Force fighter pilot in the late 1950s. I also was a pilot back in those days. So his writing resonates powerfully with me.

On Christmas Eve the young RAF pilot was flying home to England from his base in Germany. Over the North Sea he lost most of his navigation instruments and was running low on fuel. It was a bitterly cold, moonlit night. A night on which he resigned himself to dying alone and lonely in the dark, cold starkness of the North Sea, never again to see his home and family in England.

I know that feeling. I’ve been there.

The shepherd, as the story goes, seemingly came from out of nowhere. As it turned out at the end of the story, the shepherd did not exist in physical form. And, after the rescue, he disappeared back into nowhere. Back into the realms of spirit, I suppose.

I thought about this tale that had enchanted me in my youth, and pondered its significance for me personally, then and now. It has an obvious meaning for me as a former pilot, and one who’d had a similar experience many years ago. But it also has a grander and greater meaning for all of us.

As many of you know, we often speak of creating your own reality. And, almost as often, we speak of it in the “singular,” if you will. By that we mean we focus on what each of you individually, and standing alone, are capable of.

You are all grand and glorious experts at creating–you are all goddesses and gods–manifesting whatever you turn your considerable talents toward.

So, in our conversation today, we do not want to dilute or diminish the power each of you possesses individually and separately from all other beings. You need no one else to manifest all your dreams. You can create them all by yourself. You can stand alone and still live the life of your dreams.

So we start with that premise and that promise–you are all powerful creators. And everything you are experiencing at this point in your lives is of your own creation. Everything–no exceptions.

Having said all that, however, let us also say this: All of you are also powerful co-creators.

“So, Spirit,” you might say, “just exactly what does that mean?”

Well, it means when you come together with those of “like mind”–with “kindred spirits,” if you will–beings who are on the same path, of the same vibration as you. Then your powers of manifestation are magnified many times over.

As we said earlier, this in no way negates your immense creative powers individually, standing alone. You can live a joyous, fulfilling, totally glorious life all by yourself. You have that much power.

And for some of you that is entirely appropriate. These are, if you will, the “lone wolves” among you. Our dear Johnny is certainly one of those lone wolves.

But even the lone wolves can find pleasure and fulfillment in co-creating with others.

Which brings us to the point and conclusion of our conversation today.

There is much value in connecting and communing with your sisters and brothers, especially those with whom you feel a deep spiritual bond. There are times in all of your lives, even in the lives of lone wolves, when you yearn for the connection, the guidance, the warmth of a shepherd. Someone who understands you. Someone who totally accepts you unconditionally, loves you, and knows your very soul.

Co-creating with such a being can be one of the greatest joys you will ever experience in your human lifetimes. There is so much power, passion, and purity in this kind of connection. Together you can truly create whatever you wish. You can have it all.

That is the power you all possess, individually and co-creatively–the power to have it all.

You are all shepherds for one another.

Here is beautiful Christmas story about love and relationships. As Spirit says, we are all shepherds for one another.

We have 1323 guests and no members online