Spirit with John Cali
A+ A A-

Trapped On Top of the World 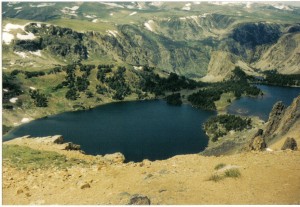 As I look out my bedroom window to the northwest, I can see the Absaroka-Beartooth Wilderness, one of the most rugged, remote places on the planet.

Those of you in my generation probably remember CBS News reporter Charles Kuralt. He hosted a popular television series, “On the Road,” as part The CBS Evening News with Walter Cronkite.“On the Road” lasted over 20 years.

Kuralt once traveled into the Absaroka-Beartooth Wilderness along the Beartooth Highway. He called it “the most beautiful drive in America.” The summit, at Beartooth Pass, is nearly 11,000 feet high. I don’t recall, but I assume he crossed in the summer. In wintertime it’s a different world. The weather can change in a heartbeat. It’s not the kind of place you’d ever want to be stranded in.

But that’s exactly what happened to a young couple last week. They were driving their little car from Yellowstone National Park onto the Beartooth Highway when they got trapped in snow. They could easily have died there.

A local rancher heard about the missing couple, and went looking for them. On the sixth day of the couple’s ordeal he found them, and drove them to safety. Their car is still stuck on the mountain.

The couple said they felt helpless, not knowing how they would get out of there—or if they ever would. They were trapped, almost literally, on top of the world.

We understand your human concerns when you are in situations like John describes with the young couple. Some of us have been human, and we have an intimate memory of what being human feels like.

It’s important for you, no matter how seemingly tragic any situation is, to know you have not only your human connections, but also your spirit connections.

Spirit can and does work through other humans to bring help when you are facing challenges.

That’s exactly what happened in the case of the young couple trapped on the mountain.

Whether or not they sent out a conscious call for help (or a prayer, if you wish), Spirit knew what was happening with them.

So Spirit communicated directly with the rancher, and guided him to go out searching for the lost couple. He found them and brought them back safely.

You often limit the ways you can receive help when you need it. Your angels and spirit guides are always right there with you. And they always want to help you.

Just be open to help in whatever form it can come to you. Spirit—your angels and spirit guides—don’t always intervene directly. (Although they do far more often than you imagine—then you call those interventions “miracles.”)

But, just as often, Spirit works through other humans, and even animals.

So if you are ever “trapped on top of the world,” know Spirit is always there for you.

You are loved. You are safe. You are never alone.

Your Weekly Guide To Planetary Influences March 30 to April 5, 2020