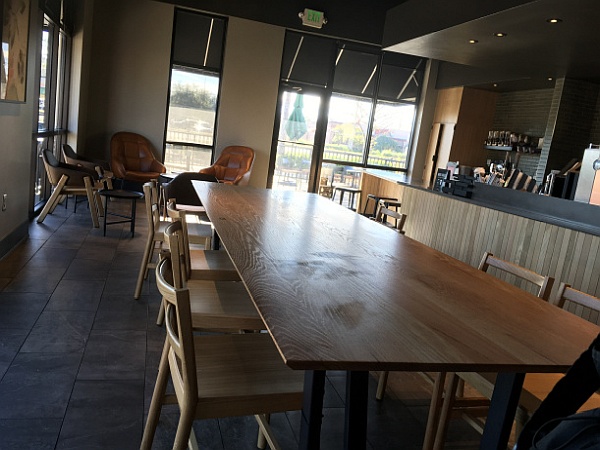 I’m sitting here sipping my morning dark roast, and I see a helicopter overhead.  It’s never a good sign.  It turns out there is a school lock down at the local Middle school, right across the parking lot from here.  Patrols are looking for the student with the gun.  Apparently they already found four guns within the school property.  I don’t know if anyone was hurt.  A young family gave me the details just now.  They were sitting with their young son, who happened to run late today and missed the chaos.

She agreed with a smile that it was divine intervention.

Someone just came in and said that most of the stores near the school have been told by officials to close down too.  So far, no one has come into this Starbucks with those orders.

Maybe we are far enough away from the school to be considered safe.

Wow, I’m not one to reminisce, but when I was in grammar school, the most serious threat to the safety of others was someone with a sling shot.

Although, there were the regular air-raid drills.  Kneeling against the hallway walls with one arm cradling our eyes, and the other clutching the back of our heads.

As surreal as that sounds now, nuclear war was a potential back in the 50s.

But now it’s just the threat of bodily attacks, by enraged males, usually.  Can we still try to spin these as isolated tragedies, perpetrated by sick individuals, or something deeper and more insidious?

And, it’s not even as simple as better gun laws.  That is a good start of course, but that’s not curing the disease by any means.

We can’t deny that aggression is part of this patriarchal culture.  Where violence is glorified.  We don’t have to look too far to see it everywhere in the media.  People get triggered more when they see people making love, especially two men, than seeing blood, guts and gore in a movie or tv show.

War is condoned, but not a homosexual relationship.

When I was in the military they gave me a medal for killing two men and a discharge for loving one.

We can see that the patriarchy nurtures male dominance, and fosters a toxic masculinity.  But of course most men are not capable of such violence.  But there is an underlying consciousness that is the root of this aggression.

And it’s no coincidence that many leaders throughout the world encourage violence to one degree or another.  Calling the press the enemy of the people, for instance.  Referencing immigrants as animals, as an infestation.  Nurturing an environment of hatred.

Denouncing the feminine, by gouging away at women’s reproductive rights.  Maybe the female gender is their most feared enemy.  Because the feminine is going to open the masculine hearts and they are going to have to face their deepest fears.

Of course, they will discover that there was nothing to fear.  No boogeyman.  Just a deep and abiding sadness, that sense of abandonment.

This whole integration process we are going through is all about the integration of the masculine and the feminine.  The balance puts us in a place of being safe, no matter where we go in life.  And it’s because the consciousness of balance translates into a safe energy.  It can’t be anything but.

So, I’m glad I am here.  I don’t feel uneasy, or threatened by the nearby circumstances.  In fact, I like shining my radiance here.  It feels like I have created a safe energy in this particular environment.

We actually do that.  Those of us who have chosen balance create safe spaces energetically and that’s not being egotistical.  It’s just physics.

Yet we are triggered bigly with survival and safety issues like never before.  But it’s just part of this process.  It will bring up fears, but it’s important to remind ourselves that those fears are not real.

We can be surrounded by chaos, but we are safe.  Same with our thoughts.  Our mind will take us to some very scary places but we are figuring out that it’s a distraction.

Looks like the barista has just locked this place down.  Well, he’s locked the doors to patrons coming in, but will unlock it for us here when we want to leave.  There are just two of us here now.  Oh, wait, he’s leaving.  Now it’s just me and two baristas.

Hmmm, looks like I get to have all that dark roast to myself!

No Need For Evaluation

Redefining the Law of Attraction

How to Meet Your Tribe & Soulmate ∞The 9D Arcturian Council

Moments Are Divine - Teachings Of The Masters

We have 1289 guests and no members online