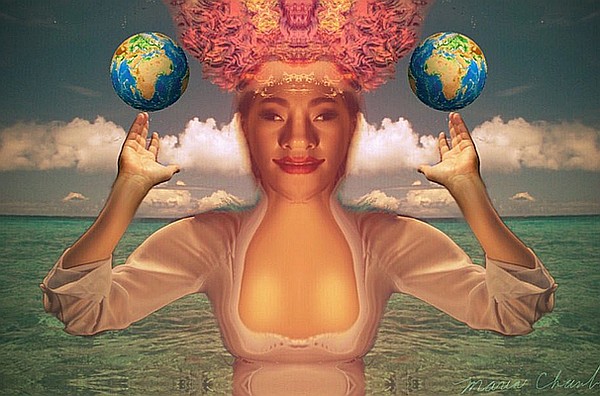 As we become realized, awakened, we notice that the terms good and bad become less and less relevant. Yes, there are experiences that feel better than others, but we also understand that it’s all good.  It is all leading us into the direction of our  enlightenment.  We are beginning to feel a new energy, a more uplifting one, and it is becoming our new set point.

I like using the outer 3D world as a reference to how we are doing in our newly forming reality, within our new consciousness.

If you feel into what is happening out there, it can feel quite congested, lots of anxiety and lots of imbalances now compared to a few years ago.  There is of course a more congested mass consciousness, and things seem to be heating up in a way we have not seen before.

We can all agree that the news paints a dire picture of world events,  but what they are reporting for the most part is fact-based, except of course for the news organizations that work, formally and informally, for the governments.

But why do things seem so much worse now?  It’s because there is enough consciousness on the Planet now that it’s disrupting the status quo.  And the established patriarchy is getting more threatened by the imminent change afoot.

If you feel into the mass consciousness, you can also feel the heart opening in many people.  You can feel the people who want to embrace diversity, human rights, and an uncorrupted government.

In fact more people than not are open to change. (Article continues after image)

So it is with our own transformation from human to divine human.  We want this change.  We want to embrace the new consciousness that is our birthright.  A consciousness that allows life to serve it.  And, like the world outside our door, there is still some resistance to that change, that wants to keep us in the status quo.

There isn’t much of that resistance left for those of us at the leading edge of this shift.  And, it’s not even just the human resisting that makes it feel at times stuck.   Our Soul is also learning to navigate this new place it finds itself in,  in which it is becoming more intimate with its human partner, (your name here).

It’s not that our soul isn’t right here with us, but it is that the partnership is still developing, with the human learning to trust the soul to create for it what its heart desires.

And the soul is getting to know the human in a way it has never done before, because it’s been mostly at arm’s length for lifetimes.

In 3 D relationships, there had been trust issues.  There was conditional love, a feeling that there was always a price to pay for the Love we received.  There was drama, control issues, and abandonment issues.

There was dependency, guilt and obligation.  Unresolved issues being displaced upon the other.  Relationships were a wonderful mirror for what we were not ready or willing to face within ourselves.  Duality at its best.

And those who are not with a mate, they are also finding that they are wanting to bring their relationship with themselves to that next level of love and trust.

The relationship with our soul is different from any human relationship we have ever experienced.  It’s not based in fear, but in love.  Our Soul will never abandon us.  That’s consequential in how we now make choices in our life.  It will never judge us, for any thoughts, or actions or inaction, past or present.  Or for how we look, our age, or our weight.

Or for whatever gender we happen to be.

Our soul doesn’t withhold its love for us for ANY reason.  It doesn’t try to manipulate us, and won’t force itself upon us.  Although it feels that way at timed.  But we need to remember we did invite our soul in because we could no longer stand that grey existence.

Our soul isn’t into drama at this stage, so it may feel as if there is no love there.  We had been so used to love and drama being synonymous.  We though that passion we felt for another was love, while it was just the drama of desire coupled with dependency.

Many people want that initial feeling of romance to be sustained and will opt for it in place of any real relationship.

So the feeling of love from our soul’s perspective can appear diametrically opposed to what we have been taught love is.

At the same time, our soul didn’t fully appreciate what it’s like for the human,  who was dependent upon the mind for so long  to create its reality.  Our human self wants to be appreciated for that, and it deserves to be.

Our human personality deserves to be heard, and acknowledged by our soul. (Article continues after image)

So just as our human self needs to have more patience with our soul, our soul also needs to get to know its human aspect better.  That’s what it is in the process of doing.  That’s what a partnership is about,

All the things we may have been looking for in a mate, we can now have with our soul, sans the drama and the power and control games.

That may feel odd at first for the human who has been so used to being the warrior in life,  fighting and defending itself, socially, financially and in love.

The human who would always wait for the other shoe to drop, especially if things were going well.

In some of my relationships with others, especially with men, I noticed that when things were going well, they would attempt to sabotage it.  It’s almost as if they already had a script, and the script didn’t include unconditional love.

Some men (and women) whose script included being abandoned, would inevitably create just that.

They did it with their previous partners, and would do it again after our relationship broke apart.  Would they eventually face their own sense of abandonment, and that they were disowning their own feminine?  Or would they continue to displace that rejection of their own feminine onto women?

And continue to blame the women in their life for their own self-loathing?

And the reason I kept attracting this type of partner was because of my own sense of guilt.  That somehow I was responsible for the male anger and their sense of abandonment.

Always trying to assuage their anger, and nurture them so they wouldn’t have to do that for themself.  It came from my own fears of having to face my own emotions of guilt and shame.

It’s not so much a personal story, but a galactic story being played out.  The battle of the sexes.  But I was done playing it.  In choosing to release the need to nurture the male ego, and letting go the guilt and the sense of obligation, I began to set myself free.

But of course as just the human, I knew I wasn’t equipped to do that.  I knew I would have to allow my soul to come in closer, and be with me.  To sense into my soul’s freedom.

No, there was no way I was going to do this all alone, and why would I?

And I noticed after some time I stopped attracting that type of energy from others. Something had changed.  I stopped nurturing the male ego, and making myself responsible for how they felt.  I began setting them free.

I did get some fallout.  There were those who called me heartless, and worse.  They (including a female friend) tried to dump their anger and frustrations on me, and played the victim one last time with me.

If you want to know someone’s true character, observe them after the break-up.

The point of this whole integration process is to unite polar aopposites…the human with all its limitations, physical and emotional, with the eternal self, who is limitless.  Transforming energies.

And, in the process new energy is created.  This is the new consciousness, in a nutshell.

We have 801 guests and no members online