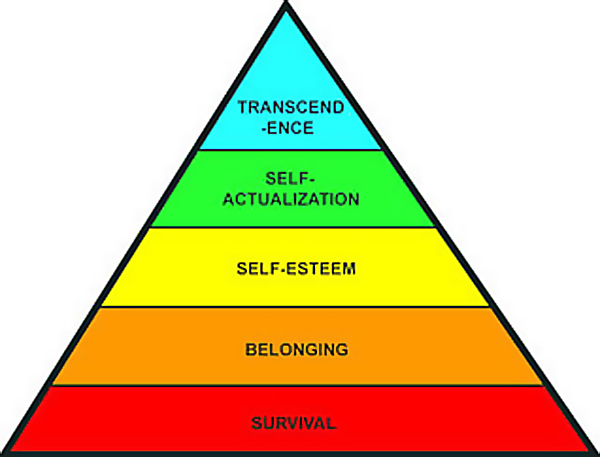 Releasing old, limiting beliefs can set you free to explore higher states of mind and greater states of abundance. We are here on earth to expand our minds – to literally make our fields of consciousness bigger. Your brain might have a fixed size but your mind is free to rise in frequency and grow to the sky!

There are distinct stages of conscious evolution, progressive steps that have been studied and categorized by social scientists and psychologists. For example, Abraham Maslow (1908-70) was a psychologist who became well known for his Hierarchy of Human Needs.

When he developed his theory in the 1950s, he predicted the transformation of humanity into a realm of spiritual transcendence, but he had no idea just how soon this would develop into a major movement. Maslow’s Hierarchy of Human Needs shows that basic human needs have to be fulfilled before people can attend to higher needs and values.

First, the basic physiological needs of food and shelter must be catered for in order to ensure survival.

Next, once food and shelter are obtained, safety and security must be achieved.

Then, acceptance by others is sought, in both the societal and personal senses. To fulfill this belonging need, people become part of a group, a tribe, an extended family, or a community.

When these deficiency-related needs are satisfied, then the individual works to acquire self-respect. Recognition by others produces self-esteem.

Once the outer needs are fulfilled, the inner-directed need for self-actualization comes into play. To self-actualize means to become the best you personally can be. Self-actualized people include those who have achieved material abundance, but also those who, as a decision of personal power, have chosen simplicity over the pursuit of further abundance. At some point, when a person says “That’s enough” to the endless pursuit of additional financial security, then they become free to accomplish anything that most inspires their inner joy.

Self-actualization is achieved after the individual ceases to have deference to hierarchical authority, and instead matures into the ability to make their own rules of personal responsibility. Personal responsibility is always more powerful and effective than any system of imposed rules. For example, you can threaten to punish someone if they steal and hope that the threat works. But, a self-responsible person simply wouldn’t steal because they would feel empathy for the loss that a would-be victim would feel. They simply wouldn’t have the heart to do such a thing to another person.

It’s a matter of increased maturity. When a person abandons the pressure of impositions from external authority and becomes their own, self-directed authority, then they become far more functional in the world. This is, in fact, a higher state of consciousness, one which provides a higher vista of awareness. From this expanded vista, they see clearly how they as an individual can best serve humanity.

In this state of awareness, the person acquires the ability to think and analyze situations independently. As a result, new and creative solutions spring to mind. They have enough self-esteem to be able to clearly see their own needs, skills, strengths and weaknesses, and from that they see where they can best be of service to humanity.

Self-actualization is the instinctual need of a human to make the most of their unique abilities. Once outer-focused, basic needs are fulfilled, it arises as the next value to require attention and it relates to being rather than having.

The being-values of self-actualization and transcendence are the higher, more beautiful aspects of human consciousness. They include unconditional love, altruism, inner joy, a love of nature, the development of intuition (in males as well as females), idealism, and a sense of wisdom which springs from within. These skills develop the right-brain functions of creativity and intuition.

In the 1950s, Maslow believed that only 2% of the population had achieved self-actualization. The mid-1960s changed all that when masses of people began the search for the higher values, such as unconditional love and spiritual wisdom. Today, that core group of progressive people has blossomed from 2% to well over 20%, and is climbing every year.

The Shift* is not a temporary by-product of the Baby Boom generation, or any other generation of modern culture. It is not a passing fad. It is not going away. It is a cosmic pressure that is unfolding and relentlessly increasing the frequency of all consciousness upon the planet.

When you enhance your life with regular spiritual practice, you become better able to attune with your soul consciousness. As this progresses, your sense of reasoning merges with your higher intuitive ability to become Intuitive Reason.

To foster the higher levels of consciousness is to grow your mind and therefore the ability to more easily manifest joyful abundance in all aspects of your life.

Practicing with the Complaining Habit

A Message From Archeia Mary: Meditation To Relieve You Of Stress

Doing the Work of Shifting Your Consciousness - The 9D Arcturian Council

Guardrails, The Self-Care Secret That Works

We have 3210 guests and no members online