God and Hell: What's the Truth? 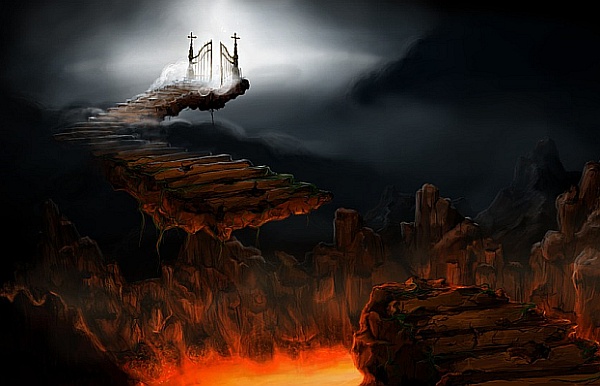 A few years ago I got a note from a young man named Scott, which wound up appearing in the book Conversations with God for TEENS. Are you aware of that book? Did you know that it exists? It's a wonderful resource for parents of teens who wish to introduce them to the CWG material.

In this letter, this young man wrote...

"How is that a God of mercy can be such an isolationist and so intolerant to other views? How can a God of infinite mercy condemn anyone for anything? Why condemn magic that heals? Why condemn for eternity those transgressions that are momentary? Scott, 18, California."

God wrote back immediately, God's thoughts filling my mind. Here is what I was inspired to offer Scott as God's response...

My dear Scott, I don't think I am an isolationist, and I certainly hope that I am not intolerant. I think that you are talking about a different God here. Perhaps it is the God about whom you have been taught, but it is not the Real God. The God you describe is a figment of your collective imaginations.

I also — and let's get this straight — do not condemn anyone for anything. I have been saying this over and over again to the human race through many sources for many years.

I have explained this in detail in the books Conversations with God, Friendship with God, and Communion with God. Many of the people to whom I have given this truth have passed My words on to the world. Not only authors like Neale Donald Walsch, but worldwide spiritual leaders such as Pope John Paul II.

At a papal audience in Rome on July 28, 1999 the Pope declared: "Eternal damnation is never the initiative of God, it is the self-imposed punishment of those who choose to refuse God's love..." That statement by the Pope was accurate. What it means is that I will not ever undertake to punish you, but you can punish yourself. You can create your own hell. Self-punishment is simply your decision to judge yourself, or to deny My existence and My presence, and thus separate yourself from Me.

The Pope said that "eternal damnation is never the initiative of God"? Yes. He also made some other very courageous pronouncements about heaven and hell during that same period in July of 1999. You may check your own newspaper accounts of all this.

Those press dispatches reported his statement that heaven is not a place, but an intimate relationship with God that can be experienced partially on Earth.

Also reported in the press was the Pope's statement that the idea of heaven as a place in the sky came from metaphorical biblical language contrasting the dwelling place of humanity and the dwelling place of God. But the Old Testament makes it clear that God "cannot be enclosed in heaven,'' that God hears human prayers, intervenes in human history, and that, "through grace, believers can ascend'' to God's presence, the Pope said.

Finally, regarding hell, Pope John Paul II said that eternal damnation is not a punishment inflicted by God from outside. It is an internal state of separation from God.

And then, Scott, came the Pope's most astonishing statement of all. Whether or not anyhuman beings are in hell ''remains a real possibility, but is not something we can know,'' he said.

Until now, no Pope and no Christian teacher of any renown has ever come even close to suggesting that there could be anything but absolute assurance about souls being in hell, which these teachers declared to be the place of "eternal damnation." Now here comes the spiritual leader of the largest Christian church on your planet to declare that he can't be sure about that.

Other religions, too, have changed their tune and softened their official rhetoric about hell and damnation in recent years, and these newest statements from the world's spiritual leaders offer important signs that your worldview about Me is changing. Now you can now stop living your lives in constant "fear of the Lord," and have a friendship with God instead of a "fearship with God."

This is not a small shift. This is not a tiny alternation. This changes everything. In what way? Our relationship can at last be one of love, not terror.

It changes the world.

We have 1302 guests and no members online