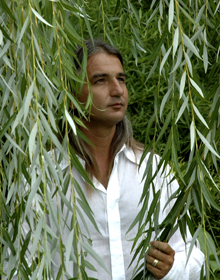 In a land once part of socialist Yugoslavia, across the Adriatic Sea from Italy, resides a small country with a deeply spiritual tradition and culture known as Croatia. Here is the birthplace of the great esotericist and philosopher Rudolf Steiner, founder of Waldorf Schools. As Steiner sought to bridge science and spirit, a new unexplainable phenomenon of miraculous healing is uniting again fields too long kept apart in the west and which must reconcile in this age of Aquarius, the age where science comes to understand and explain the ancient wisdom of the sage and healer. Healing has literally come to all levels in the form of a gentle and humble man called Braco, whose nickname translates from his native Croatian to affectionately mean 'little brother'.

Since 1995, laymen, doctors and scientists alike have recognized Braco for his miraculous healing ability. It has created a great mystery for western science to appreciate and a great validation of the inner power and strength present within an individual - waiting to be called upon, waiting to be chosen and used. His gaze is his tool of transformation and healing, and over 200,000 people traveled to experience this man's silent gaze in 2008 alone. Everyone is asking how only five minutes of this man's gaze over can transform lives and influence spontaneous healing from severe, chronic and even untreatable illnesses of mind, body and spirit?

Parapsychologist, author and consciousness expert Drago Plecko, MSc., has studied western and eastern traditions to understand spiritual power and healing. He has written, "After I have been traveling all over the world for more than 30 years to search and find the secrets behind the mystery of spiritual healing, I finally found the biggest and most impressive power in my home country just a few steps from my own house."Mr. Plecko explains that some individuals can affect the human nervous system via intention by use of a "non-local reality". It is the power behind Braco's gaze that allows the anomalies of a human life to dissolve so that the life comes into greater balance and harmony.

One of Germany's foremost authorities on healers and healing, Dr. Harald Wiesendanger, author of 28 books and founder of the IAOH (International Agency for Outstanding Healers) has stated,

I was impressed by the reports of the participants, some of them were even doctors by themselves, who explained how these sessions with Braco have helped them: Even paralysis, allergies and tumors disappeared. But I was not only impressed by those reports, I was also impressed by Braco's behavior: In spite of the fact that thousands worship Braco like a saint, he has staid to be a very natural, decent person who has kept his humility. And he strongly adheres to his conviction that you should never make a business with something which you have been given as a present."

Braco, in the tradition of true ancient healers, does all his work for free and does not charge any money at all for his healings, nor does he accept any donations of money for this work. It may seem odd that he was once a successful businessman with a Masters degree in Economics, but his life changed in 1993 when he met a man who would become teacher and friend, the great bio-energy healer and prophet Ivica from Serbia. They would share only sixteen months together before Ivica's tragic drowning, but during this time he named Braco as his successor. Ivica also prophesied that Braco would only set foot in the United States after a great shift in consciousness took place amongst the people.

It is no coincidence that after the November election and Barack Obama's entry into office, the way was cleared for Braco's first visit to America. Everyone is now facing the opportunity to open in perspective and action to more balanced possibilities as our ill begotten economic, social, educational and political structures are challenged and crumble. Braco represents a new level of healing reality to consider in the very left-brain West with a greater underlying potential in each of us. I had the unique opportunity to talk and spend time with Braco and Drago Plecko over eight days and experience group healing sessions while attending the largest esoteric/UFO conference in the country at Laughlin, Nevada in February 2009. Here Drago Plecko presented the case of "The Mystery Man" with scientific findings and testimonials about Braco's work, while Braco himself demonstrated his powerful gaze during group healing sessions each day of the conference.

Braco: The Lineage of a Super-Healer

Croatian Super-Healer Braco unexplainably heals with his gaze alone. He does not ever speak during a healing session nor address individuals about their problems and concerns. No requirement of religious or spiritual belief is encouraged or needed. Braco simply stands on a platform in front of his audience and silently looks ahead with a gentle gaze. All present are instructed beforehand to stand and to look at his eyes and to think of their illnesses and problems. During the five-minute healing session, many immediately feel an intensity of energy and bodily sensations; others shed tears or have profound experiences of joy. Sometimes the dramatic happens for those with apparent maladies, but more often people walk away and throughout that day begin to ‘know’ the answers to their problems or to feel better about their illnesses. Those with illness are always encouraged to check and confirm progress with their physician, which has led to innumerable stories of confirmed healing miracles.

Braco’s gift of healing emerged spontaneously in 1995 after his return from South Africa, where he was with his friend and mentor Ivica Prokic at a beach when he drowned in a rouge wave. Ivica was renowned for his bio-energetic healing ability and had a special gift that enabled him to tell people’s futures by looking into a small mirror. Uniquely, Braco’s first act of healing was to simply touch the picture of a very ill boy whose mother came to him after having a dream that Braco would make her son well. Braco reluctantly tapped the photo at her insistence of his healing gift and the boy quickly recovered. Ivica recognized Braco was his successor, and now his prophecy was fulfilled. Many began to come with photographs of loved ones who were ill or in some difficulty, eventually even photos of pets were brought and the numbers of people grew as more and more miraculous healings took place. In time, Braco came to work as long as 36-hours straight, seeing all who came one-by-one.

In 2002, inspired by his intuition and with two thousand visitors waiting to see him, Braco stepped in front of his first group of people using only his silent gaze to heal. Instead of lessening the effect of the healing power, the groups intensified the results, and this is how the work continues to this day. Groups of 50 to 1000 people gather for a healing session and Braco now does twenty sessions a day working 10-12 hours each day at locations across Europe. He is booked with appearances four years in advance. Many in the scientific community and media have been distrustful, explaining originally that Braco only hypnotized the people, but when he stopped talking completely during healing sessions this explanation could no longer apply and much more was proved to be at work. To support their healing transformation, many people find that watching a video of Braco or reading a book about him strengthens the healing effect over time. Even more astonishing, there have been reports of spontaneous healings by those who have only watched a video of Braco to connect with his healing energy.

Croatia and the surrounding countries of Eastern Europe possess deep spiritual roots and many great healers, prophets and seers have emerged from this region. A special lineage of healers is said to exist here and so I asked fellow countryman, Parapsychologist Drago Plecko, if Braco was a descendant of this ancient line. Drago Plecko himself spent more than a decade with Maharishi Mahesh Yogi, the father of Transcendental Meditation, as well as studying both Eastern and Western spiritual traditions for 30 years. He offered that the ancient lineage is not something one is born into, it is chosen by the healer himself and it is in his choosing that he (or she) becomes transformed and inextricably interconnected to this extraordinary line. Microbiologist Dr. Bruce Lipton, author of The Biology of Belief, confirms this possibility with his research which concludes that anyone can alter even DNA itself with profound thoughts and choices of belief.

Such gifts as exceptional intuition, prophecy or healing are developed and earned through many lifetimes of work, seeding the way to produce when ready a life in full blossom. This happens in a lifetime of convergence and through the strength of purpose and vision to rise above the average, the mundane and the world’s mediocrity to exemplify a better and more splendid possibility. Such individuals know with complete certainty that true love and kindness are boundless and this knowledge crafts their destiny. Sri Aurobindo, father of Integral Yoga and one of the great spiritual leaders of the 20th century, defined the spiritual transformation of the world and the next phase of human evolution before his passing in 1950. He foresaw the coming of those who would heal the world with their gaze alone, breaking the ceiling of humanity’s current level. Is Braco a saint as some call him or the first appearance of the supernal men and women that Sri Aurobindo foresaw as the precursor to our evolutionary maturity? Certainly he is the living embodiment of a more splendid possibility that can inspire us all.