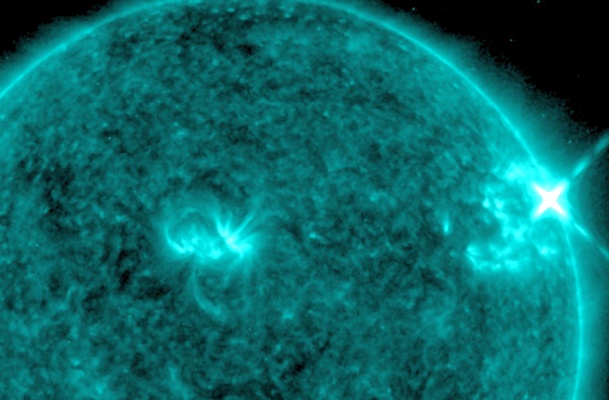 The Sun has had an X class solar flare, the largest in 4 years. It happened on Sat July 3, 10.29am, EDT (New York time)…Sun July 4, 12.29am Sydney time. Officials reported it caused a brief radio blackout on Earth.

The Sun experiences 11 year Solar Cycles as it makes its way from Solar Minimum (mild flares) to Solar Maximum (strong flares) and back again. The current 11 year cycle - Solar Cycle 25 - started last year. This recent X Class Solar Flare is the first large flare of this Cycle. Solar physicists expect solar activity to increasingly ramp up from now as we approach Solar Maximum, expected anytime from 2024-2026.

We often unknowingly respond to solar activity and geomagnetic disturbances as a stress response - be it physical, cognitive, behavioural or emotional - which can in itself be stressful if we don't know the cause! As we approach this next Solar Maximum period, it can be helpful to be aware of any major Solar Flares so that if you do have a stress response, and there is no other explanation for it, you can maybe find an answer on Space Weather!

It tends to take several hours even up to 24 hours for people to start feeling the effects of a Solar Flare. Some people can feel the affects ahead of time even before the Flare officially happens - often not knowing why they're feeling what they're feeling.

Flares are energetic intensifiers…you can literally feel yourself “on fire” however that may manifest eg anger, increased adrenalin, energy and productivity, or in some cases actually feeling it physically in your body.

Solar Flares can trigger old issues, emotions and patterns, so you can look at the Flares like energetic cleansers, purifiers and transformers. Use them consciously to shift things that are ready for shifting.

How are you feeling?

+ - Credit Click to collapse
(c) Dana Mrkich 2020. Permission is granted to share this article freely on the condition that the author is credited, and the URL www.danamrkich.com is included. Dana Mrkich is an Energy Intuitive, Writer, Speaker, Teacher and Author of A New Chapter. Join her on Facebook or Twitter for regular energy updates.
Source Here
back to top
Tweet