Solstice - Great Conjunction Activations
A+ A A- 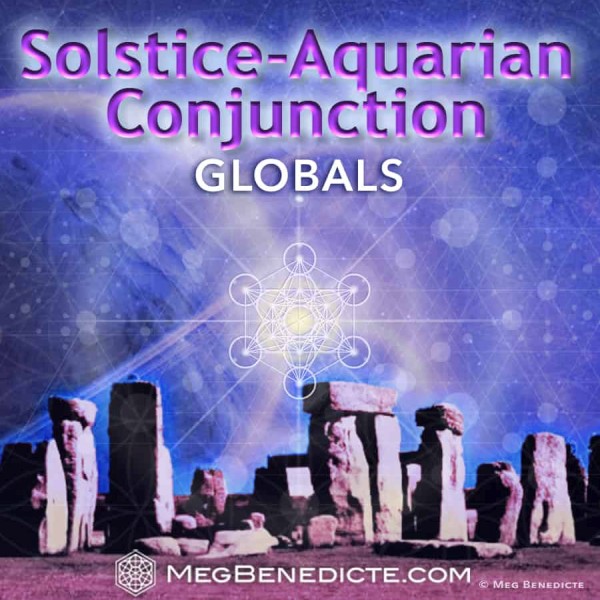 We are currently in the midst of the ‘standout astrology’ of 2020…culminating with two Eclipses, the annual Solstice and the two largest planets moving into Aquarius, all while aligned with the galactic center and the Great Central Sun. It is the perfect ‘closing act’ of 2020, a year of rapid change and transformation.

First up on Thursday, December 17th Saturn enters Aquarius until March 2023. Saturn symbolizes the Great Teacher, emphasizing discipline, diligence, patience and maturity. On Friday, December 18th the Sun positions at zero point with the Galactic Center and the Great Central Sun at 26° Sagittarius. The Solstice arrives on Monday, December 21st, starting a new season on the first day of Capricorn, while Jupiter joins Saturn at 0° Aquarius in the much-anticipated ‘Great Conjunction’.

It takes approximately 200-300 years to gradually shift fully into a new 2000-year astrological age. The ‘Great Conjunction’ on December 21st is notable as Saturn and Jupiter shift from earth signs to air signs. In the quantum field every problem is linked to its counterpart solution. The Aquarian Era inspires creative groups of people to access quantum solutions to the world’s problems. Air signs represent intellect and ideas, and Aquarius is the sign of innovation, technology, and humanitarianism.

With the two largest planets at zero degrees synching with the galactic zero point field, we are in a galactic rebalancing act.  It may feel like you are suspended between the old dying system and the New Earth explosion. It is a universal ‘pause’ as everything goes to zero. It initiates a global restructuring of human consciousness.

We have been gradually transitioning from the Age of Pisces into the Aquarian Age for some years now. As we clear ourselves from the collective karma during the Age of Pisces, we embrace more enlightened freedom (Aquarius). The Demagogues of the past Piscean Era will no longer continue in the Age of Aquarius.

2020 has revealed how top-down hierarchical systems lead to corruption and power imbalances that are not in the best interest of society. We are witnessing the final power-grab of a collapsing system.  A 2020 study by the RAND Corporation shows that between 1975 and 2018, $50 TRILLION of combined income was transferred from the lowest 90% of income earners to the top 1%. It is the greatest financial theft from one class to another ever recorded.

The lessons of the Patriarchal Era are embedded in the hearts and minds of humanity. It is un-sustainable. As long as the ego is separate from the soul, we will not achieve the Aquarian ideals of individual freedom within thriving societies.  The path of progress forward is evolving into unity consciousness – the merging of ego and soul.

With Saturn moving into Aquarius, we won’t be replacing the failing system with a new hierarchy or authoritarian leaders. We are being called to create a new system organically, from the bottom-up. As a global community we will join together and build a new world. This is what we call the New Earth. Saturn in Aquarius inspires all of us, as individuals to contribute to a better world – by helping ourselves, our fellow humans and other living beings from a place of love and support.

Some of the shifts we can expect during Saturn’s transit in Aquarius – https://astrobutterfly.com

The Solstice occurs when the sun ‘stands still’ between light and dark. It is the ‘zero’ balance point of all creation. It is also the day the Sun enters Capricorn, an earth sign, initiating a change in seasons. While the portal to the galactic center is open, the crystal wave DNA has been attuned to higher dimensional frequencies.

12:21 signifies the ‘mirror effect’ of opposites. The 12:21 Solstice is a moment when balance is required, everything that is out of balance is felt intensely. As the Aquarian Era intensifies, we celebrate the sacred marriage of the divine feminine and masculine gifts in harmony and balance. We are forging a new society of conscious coherence.

The Aquarian galactic reset ripples into every area of life. Whatever we initiate during the 12:12 – 12:21 Gateway will ripple into the quantum field of all possibilities. As we near the annual Solstice on December 21st, let your imagination run free in the quantum holographic field. You are birthing your Soul’s destiny in a newly forming era.

As we join together from all around the world, we will seed the planetary field with new earth templates, consciousness and holographic inserts as we alter the course of humanity. We will flood the earth plane with LOVE vibration!

Working with Archangel Metatron and Michael, we will travel to the Great Central Sun to accelerate and activate the crystallization of our human self, so that we can become Divine Humans. Join other Light Bearers, Gridworkers, and Star Beings from all around the world for the 12:21 Solstice-Aquarian Conjunction Global Activations on Monday, December 21st at 12:00pm Pacific Time. The show is recorded for replay. If you would like to participate, register here.

+ - Credit Click to collapse
Copyright (c) 2020 Meg Benedicte * All Rights Reserved * You may copy and distribute this material as long as you do not alter it in any way, the content remains complete and you include this copyright notice.
Source Here
CrystalWind.ca is free to access and use.
Please support us with a small gift of $11.11 or $22.22 or $33.33.
Thank you!
ॐ Namasté - Blessings!