The Rebirth Amplified
A+ A A- 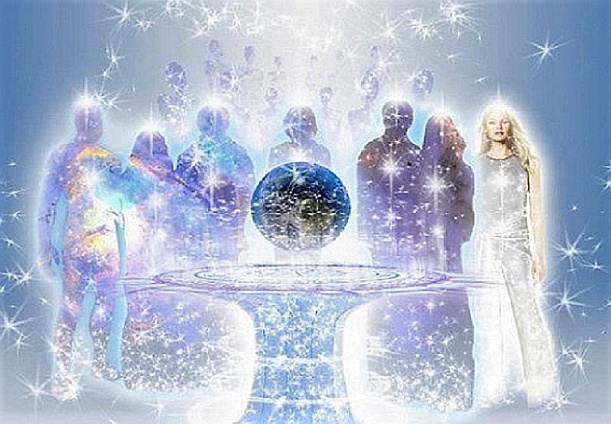 The Pleiadean Counsel of Light is now working intensely with planet earth, as one of those 12 Master Galaxies who were involved with the creation of the outer earth.

The Pleiades hold the Temples of Light and so many of native people of the earth honor them as being their ancestors, e.g. the San Bushman of Southern Africa, as well as Native American Tribes.

At this moment the Pleiadean Counsel of Light with those of Sirius, Orion, Andromeda, the Milky Way Galaxy, Lyra, Arcturus, the Bear Constellation, Cygnus, Pegasus,  and others, are gathering like never before around the planet, assisting it incredible rise in vibrational frequencies as it shifts ever deeper into the 5th dimensional state, linking now to the 6th.

The New Earth is buzzing with life.  She is not reborn, she is being recreated into the highest version of herself, as she was in the beginning.

She has been linked up to the 7th Central Sun of Illumination once more, and thus is being now infused with the highest codes and keys of Illumination, which for many millions of years, humanity did not have access to, as asteroids bombarded the earth and many of the ancient civilizations were destroyed, almost overnight.

Before these ancient civilizations were destroyed, their own Seers and Visionaries had warned of the impending destruction, and so of the people, en masse, who were ready, aware and conscious chose to withdraw their energy and their physical reality before the catastrophes happen.  They never left the planet, they merely exist in a much higher dimensional form, and thus a much higher type of light body form, and they call themselves “The Ancient Ones” as much as they are the Guardians and Keepers of those places which they still guard.

During the last 24 hours, massive energy changes have streamed in and are streaming in, which is accelerating the dimensional shifts as well as bringing rebirth at a very higher level.

As this is happening, old and dormant soul memory banks are surfacing, which are enabling us to now finally release the old negative karmic patterns created between souls (now again incarnated), as well as very old ancestral programming and negative patterns.

It will be as if the floodgates have opened, not only at physical level where our bodies now need to cope with accelerated upgrading, into the very core of each living cell and DNA strand, but also with the way we produce food and digest it.  Our digestive systems will start reacting to a much higher degree to what it finds intolerable and thus, be careful what you eat, and how you eat it.

Many soul contracts are being fulfilled now, and there will be a mass exit of the planet of those souls who are contracted to leave now.  They are making way for the new generations of pure souls who are already here, the and ones queuing up to be born.

We are during a dramatic rebirth; the likes of this humanity have never experienced before.

We need to build out light bodies and be diligent and disciplined about it.  It is best to work intensely with the Violet Fire now and become aware that the Fires of Purification are with us and purifying us to the highest degrees.

Some will cling onto the old structures, the old life and life forms, for dear life and will find that the more they cling onto anything, the more it will disintegrate.  One cannot hang onto anything and anyone anymore – all is rapidly changing form.

The Pleiadean High Counsel of Light (they hold the Temples of Light in the inner planes, as well the Light Language which is a language of sacred geometrical symbols and encoded codes of Light), are stressing that you will start feeling rebirth at within ALL your bodies: – physical, emotional, mental and spiritual and your etheric and energy bodies will be filled with high frequency light encodements beamed down from the Pleiades.

It is a time of transmutation, transformation, and to be welcomed and not feared.

It is a deep inner change which is happening: – for in truth Divinity lives within each one of us.  It from deep within ourselves that we connect directly to the Divine and All-That-Is.  This awareness will spread like wildfire now, for it time for humanity to remember and reconnect, for it only through this reconnection that you will be able to navigate the intense and immense changes pouring in, which will accelerate until 2034 when another portal of renewal opens.  Especially 2021, will accelerate the whole process and we will be assisted through all of this, if we are open to it.

And let there be a rejoicing, for all which has held us back for so long, and which kept us chained to the lower bodies of the 3rd Dimension, are now coming off.

This is immensely freeing, and it is truly a Divine Gift to humanity of the highest order.

The key to riding the wave of rebirth goes through the heart and soul and going deep within for guidance and reconnection to All-That-IS.