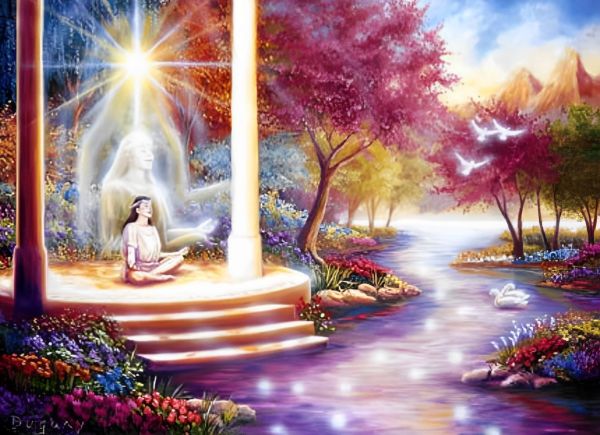 I am being made aware of wave upon wave of transfiguring Love, which is Source Power pouring in, and it is bringing immense revolutionary inward changes, in all life and life forms on the Old Earth as all is in the state of transfiguration.

I am being shown that even atomic structures, harmonies, and all aspects of cellular life and DNA, and whatever is within our physical, mental, emotional, spiritual and all other bodies, is now in a state of dissolving into a much higher embodiment, form and expression of our souls.

I stood yesterday, at a certain spot overlooking the pyramid mountains here, and I became AS ONE with the Omniversal Creation. I felt myself being lifted beyond what I ever could experience before: but more than this, I felt it in the deepest core of my heart, soul and being! I could feel the power of the New Earth rising, hear her songs of songs, and feel her heartbeat, which was vibrant, alive, and indeed filled with exponential new life and life forms – species were never even knew existed, and the new human, which is beyond our scope of even imagining now.

The dimensional shifts now are expanding into the 7th and 9th and the higher octaves, as the Universe is reborn and thus also lifted and recreated, with the galaxies and star systems, constellations, and even the newborn stars are lifted into a much higher evolutionary state of creation.

Then I was shown how many humans in the old earth, still have their heart centers closed, and how they are fearing the drastic changes, and holding onto old programming, hurts, slights, and whatever there is to cling onto, old fears and old egos. And I was shown the cracking open of hearts at the very core, where all now surfaces which was there before, which was never loved, never forgiven, held onto for dear life….

Then I witness of Power of Divine Source love, pouring in, and dissolving all that was still here blocking, hindering, keeping humanity imprisoned, in whatever form and way – and it was so heart-touchingly beautiful to witness! As they were freed, many were bewildered, and did not know what to do with their newfound freedom and self, and still they were held in the arms of love, and in the heart of love, and nurtured and assisted, until they finally could love themselves, in the deepest sense, and others.

And then, I saw, how those who had already made the transition into the New Earth, were beaming loving energy from their heart center into each other’s heart centers and then that became one massive heart filled with love, and this love was then beamed into the heart center of those who still needed to be lifted into the higher dimensional earth. Again, the waves and waves of love, and indeed, I have never witnessed such depth of love, so length of love, love expansion. I had tears running down my cheeks, tears of joy!

And I saw the New Humanity – with their heart center open, vibrantly, alive, and well, and with it a new vitality, new creations, new ways of life and living, at one with the New Earth and Atone with each other! At one with the Universe, and At One with the Source!

And the Flame of Unconditional Love and Unity molded them together AS ONE!

This not only included humans, but animals, and all living creatures, and species on earth, all life and life forms and the new life now being created, and new species and new plant life and trees, etc. It was vast and beyond comprehension, yet my heart and soul recognized this, as a totally new Creation!

We will find in the next few weeks, and months, now everything changes to the core, as the Power of Love, will find more and more cracks, and pierce open what needs to be opened and finally released – and with it, the massive rebirth, rising in crescendo, wave upon wave, upon wave. The dolphins and whales are adding their soul songs and so are the elephants, and lions roaring and trumpeting, and shaking the earth’s new crystalline grids.

The New Spine of the Earth is pulsating with new vibrant celestial sacred tones and the new Tuning Forks are in place, and new Lightning Rods, and Lightning Conductors and the New Illumined Spines now acts as Universal Cosmic Transmitter, accessing Omni-Versal knowledge beyond anything dreamt possible before!

Watch how the animals already have ascended, the dolphins, the whales, the elephants, the lions, and all others, beyond names, and new species now born. Watch how new life is teeming in all forms and expressions thereof, and beyond that ever known to us before. They were coming in from all over the Universe, and they are 5th to 9th dimensional, as are the elementals, etc.

The Crystal Pyramids are alive and pulsating with life, so are all sacred sites, and many not known to us, are now rising as the New Earth it much larger than the old, and the African continent is doubling in size!

Every word here will ring within your soul and will awaken you into the core of the soul!

The moment is at hand!
Judith Kusel