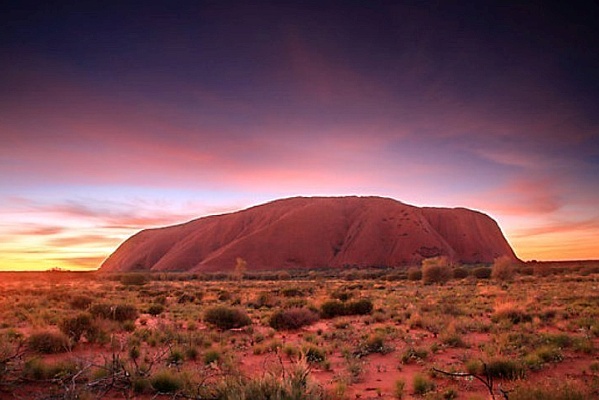 When I studied to be a shamanic practitioner, I trained with someone that had worked closely with Sandra Ingerman. I loved the style and figured I would be drawn to the Native American way. While I have two native guides, Standing Bear and Eagle Eye, they were not my primary shamanic guides.

I found myself pulled into working with the Aboriginals and Dreamtime. Initially I felt quite hesitant to follow this path as I have never been to Australia and I knew absolutely nothing about the Aboriginal culture or their sacred sites. However, spirit does not care about cultural appropriateness and will illuminate the path that is most in alignment with you.

Through the shamanic training I received, spirit consistently brought me home to the beauty and wonder that is Uluru and Dreamtime.

Now I often find myself going into Uluru and working with the beings that reside inside. When I assist with a soul retrieval, I begin by going into Uluru where I meet my Aboriginal soul retrieval guide, receive an energetic clearing and then it opens into Dreamtime where I am guided to the lost soul pieces of the client.

Over the last few years I have watched a change taking place. On January 12th, 2020 there was a massive change within the community that resides within Uluru. This was during the conjunct between Pluto and Saturn. During this time All of the Earth’s chakras were reconnected. This was extremely important for the Ascension process and it was needed for the new children that have been coming in. You can read more about it here.

Within the last few months I was shown another great change. I was standing outside Uluru and all around the sacred site massive weather events were taking place. Floods, mudslides, earthquakes, ice storms and snow, and drought. The message was that we were entering into a time of massive Earth changes.

On December 20th as I settled down for sleep, I was drawn back into Uluru. I saw a group of about 20 beings that I had seen and worked with before sitting around a huge hole. I went to where they were, and I was instructed to sit and join. Just then the hole lit up with the brightest gold white energy that illuminated all our faces. I asked what was happening and if we were working to activate the Earth’s heart chakra. I was told no and that at this time we were giving energy and activation codes to the Earth to awaken her and break the spell of sleep.

I looked over to one of the beings that I’ve connected with for years and said “There is going to be massive Earth changes when she wakes isn’t there?”

She smiled and said “Yes, be ready.”

I stayed with the group sending energy to break the hypnosis spell for as long as I could, but my eyes were so heavy. I asked them to wake me when it was time for the solstice which would be at 3:02 a.m. Denver time.

I drifted to sleep and knew that I continued to assist in some way but woke with a startle to the words “WAKE UP!” I got up and looked at the clock and to my surprise it said 2:02 a.m.

I got comfortable and I headed back inside Uluru. The group was still around the hole sending energy. Now there were hundreds of people within the sacred space. The energy going into the earth was much stronger and you could feel a stirring and the excitement was building. I could also feel just how many were connecting in from outside the sacred site. It was incredible.

I sat next to the one I know, and we began toning and as they said “Calling the mother home to herself”.

We continue to sing, chant and tone for about 2 hours. I stayed in a lucid state, more fully there than in my own bed. Sometime after 4:00 a.m. I drifted back to sleep.

In the morning I woke, and I returned to Uluru and the group that was still working with the energies. The energy and the space felt different. There was a quality of awe, of reverence and even a little bit of hesitation.

I moved towards the circle and to my surprise there was an open eye in what was just a hole prior. I stared at the eye and realized that the eye was not like a human’s eye, and I could see great anger coming forth. It was the type of anger that was deep and seething.

I looked at my friend and she says, “We are sending love to her now, to calm her.” I looked questioning and she replied “imagine waking from a nap to find your home destroyed and your children abused. How angry would you be?”

To me, I felt like I was staring into the eye of a giant, powerful, beautiful dragon. It was how my mind processed what I was seeing.

I stayed in the space for a few more hours, sending her love and in a sense, we were holding her as the energy went from anger to sorrow to determination. If you feel called, please send her lots of love. She is coming home to herself just as we are. She is integrating all that she is so that she can move forward, just as we are.

It was amazingly beautiful, and it was an honor to be able to understand what was happening. I am not sure where all of this will lead. What I do know is that we are moving from duality and separation into unity and zero point.

All distortions must be seen. The stories, justifications, and collateral damage for the “greater good” must be seen for what they are: excuses. We must own where we have separated from self, the Earth, and Source and reconnect.

It is time that all of us, all our layers, all of our aspects awaken from sleep and hypnosis to join the parts of ourselves in the higher realms that are waiting. They are eager to merge and to create the new.

Deep gratitude for all that support and share this work. I appreciate all of you. I hope that you are doing well in the Solstice energies. Now the deep work begins, we must see through all the ways we have separated and acted from a place of unconsciousness to the whole. Love and honor yourself regardless of what comes up within to be heard and seen. You are so deeply loved and cherished. If you have not already done so, please join my mailing list so that you keep up to date with my postings and offerings. To join the mailing list, click Here

We have 1450 guests and no members online