A ‘Levitating’ Train That Travels At A Faster Speed Than An Airplane!
A+ A A-

A ‘Levitating’ Train That Travels At A Faster Speed Than An Airplane! 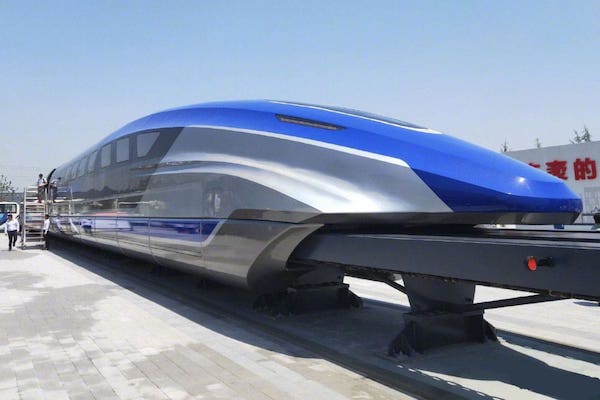 Going via airplane is always the first choice when traveling to far off distances. It’s faster, more convenient, and saves people time. But what if there is a train that would go even faster than an airplane?

The China Railway Rolling Stock Corporation has recently announced their idea of a super fast train called the ‘Maglev.” Maglev refers to a process of making the trains levitate off the tracks by magnetic repulsion, which pushes the train forward by keeping it away from the ground. This process makes the train achieve an astonishing speed because of the loss of friction that is found in between the wheels and track. The train then floats on a cushion of air two inches between the train’s body and the magnetic tracks.

The Maglev bullet train of the CRRC is designed to go up to the speed of 373 mph which will make it a faster mode of transportation than even regular airplanes. The train’s prototype was already seen last May in Qingdao, China.

The CRRC first announced their bullet train idea back in 2015 and was able to produce their first prototype in only three years, while the production and official launch to the public is set to happen by 2021.

The simplest concept of understanding the difference of speed between the maglev train and an airplane would be: A trip by high-speed train from Beijing to Shanghai takes 5.5 hours, whereas it takes 4.5 to travel this distance via airplane. With the maglev bullet train, the trip will be shortened to only 3.5 hours.

According to the deputy chief engineer of the CRRC, the company is planning on testing the train in an experimental track very soon. Qingdao Sifang, an employee for CRRC also said that they will execute the construction of the track as well.

We have 1449 guests and no members online