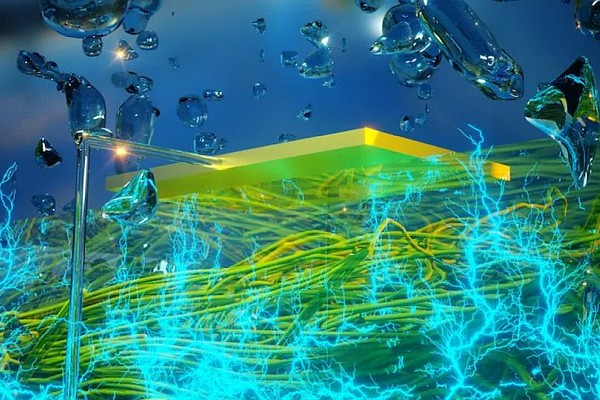 Power generation requires large plants, that generally tend to be non-renewable and have high levels of carbon emission. But, scientists from the University of Massachusetts Amherst have developed such a clean-energy device that generates electricity ‘out of thin air’.

Specifically, the air-generator device is able to convert moisture in the air into electricity. The air-gen uses electrically conductive nanowires made out of protein from a special microbe known as Geobacter. The wires are laid out over an electrode surface as thin films that are about 10 micron/micrometre thick. The film is partially covered from the top by the other electrode which is smaller in size.

The films of protein nanowires absorb water vapour from the atmosphere. Through the chemical interactions of water with the protein, an electrical current is developed between the two electrodes. The electricity generated by the films is sustained— a constant power supply. Researchers explain that this is due to the self-maintained moisture gradient of the film that keeps absorbing water vapour in the air.

The air-gen devices are able to produce a sustained voltage of around 0.5 volts. Several devices could be used in conjunction to increase the voltage and current to power electronics. While the current air-gen devices can power small electronics, researchers will continue to develop the technology for commercial use. They plan on using the tech to power wearables like smartwatches and eventually smartphones.

The technology would remove the need to periodically charge electronics as the researchers explain in their paper, “Our results demonstrate the feasibility of a continuous energy-harvesting strategy that is less restricted by location or environmental conditions than other sustainable approaches.”

To make the technology commercially viable, researchers have even developed a method to produce the protein nanowires on a large scale. Jun Yao explains they turned a microbial strain of “E. coli into a protein nanowire factory”.

We have 2353 guests and no members online