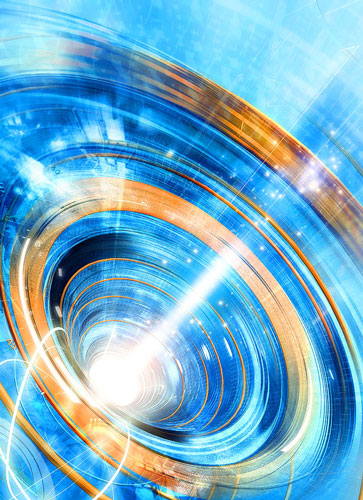 When comparing theory to anecdotal stories regarding time travel, theory predicts that the rate of time in terms of the periodic motions of a clock, atom, or planet can be slowed down in order to create a differential between the time within the space of the clock and the space outside of the clock. This differentiation is either caused by near-light speed motion of the clock, so-called time dilation, or by gravitational fields, or by some physical method of slowing vibrations.

Theory predicts that we can travel into the future, but not the past unless faster-than-light travel becomes possible. All of this does involve elapsed time or travel from t1 to t2. Speeding up the rate of time would only cause us to arrive at some future moment a little sooner than everything outside of our time field. Thus transporting ourselves from the present to the past or the future and returning to our starting time seems not only impractical, but impossible.

On the other hand we have anecdotal stories involving time slips or shifts with and without time machines with many more instances of ordinary persons experiencing spontaneous phenomena. Descriptions by those who have these experiences indicate that no elapsed time is indicated and that the experience resembles more of a “jump” than travel as depicted in the movie The Time Machine. The person reports an instantaneous shift to some historic moment in time and, more rarely, some future moment; experiences events as physical or quasi-physical in some instances, and returns to the present moment after some apparent lapse of time in a bygone era. If we accept these stories as veridical reports, then we need to reassess our ideas of time and even reality.

The idea that we could jump through time as if we were jumping into the air and landing in a different space raises numerous questions. Indeed, when we move through space we usually take advantage of three dimensions and the persistence of objects in time. No matter where we travel on earth we seem to be locked into the present time dimension though we can move through time zones. Could our universe exist in more than one instant of time? Could the events in time be recorded on some universal holographic medium so that we could literally tune into and jump back to some previous event?

The time jump concept needs to be explored further. There is associated phenomena in the time shift reports that may give us clues as to how this phenomena works and what it tells us about the nature of the universe.

Let us begin by examining space which has the dimension of length. It has become conventional to give space three dimensions in order to use coordinate systems to locate a point in a given physical space. We can specify these 3 dimensions as x, y, and z. In order to travel along a line beginning at x’ and ending at x” we move along a line at a specified rate of speed and move through all positions connecting x’ and x”. In order to measure this rate we introduce a fourth dimension – time. We also accept the belief that when we move from one point to another, we move forward in space and time and if we do not move forward in space, we move forward in time as we are all a part of a larger system which has motion and contains motion and all motion involves time.

We think of all this motion in space and time as linear, but if we were to examine motion in a larger context we would see that what we conceive as linear motion is in fact curvilinear motion and that regular motions exist that repeat that we call periodic and thus we are given a way to measure time using these periodic motions to compare against other periodic and non-periodic motions.

Presently scientists are progressing with a technology called quantum teleportation. This involves scanning a particle, and making a copy of that particle at a distance. The old idea of teleportation is take an object or person and instantly moving that original person to another location. Quantum teleportation does not transport energy or matter, nor does it allow communication of information at superluminal speed, but is useful to quantum communication and computation. (Wikipedia).

I believe teleportation and time travel or temporalportation are similar phenomena except the object or person is displaced in time rather than space. In past considerations of time travel involving the relativity concept of space-time, time travel is only considered as an aspect of space travel. However, if space and time are not strictly welded together, we can revive the concept of moving in the time dimension without moving from the spatial position occupied.

Spontaneous phenomena that, if authentic, point the way to a more classic variety of time travel or temporalportation backward or forward in time in a virtual instant without huge expenditures of energy or the need for space travel. Since this has reported as spontaneous and is not controlled, more study is needed to assess how a real time machine can be constructed. The whole question of time paradoxes would have to be re-examined after making a study of natural events. We need to balance the theoretical with the experimental and observational to arrive at a true insight into the multifaceted nature of our universe.

We have 1187 guests and no members online