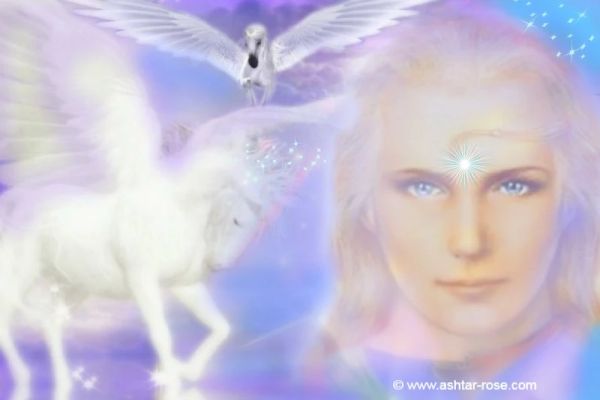 The next step: There is going to be an important revelation in the contact with the other dimensions. The star brothers and sisters from Divine love light are ready to get in touch with you. The war between Russia and Ukraine is slowing down and throwing a veil over this positive progress. Despite all the opposition, a next step is being taken in making the UFO evidence public.

When Switzerland no longer takes the neutral position in this war and becomes involved in this conflict, a different course is chosen. Switzerland has been the central energetic point in Europe from ancient times and plays an important role in the revelation of UFO contact. Many evidences have been stored in secret and the Netherlands also contributes to this.

The war between Russia and Ukraine together with the influence of NATO form an energetic triangle. In this triangle the conflicts can be worked out more quickly, especially with the increased energy of the diamond light and the opening of the Sirius gate. The delay has been set up to bend all this into its own way of acting. The influence of the Netherlands is strongly present here.

The Congress of May 17, 2022 (see link ) created an opening to contribute to the disclosure of the extraterrestrial contact. The next step to substantiate this announcement will be different than planned. The delay that now arises brings the position of the light dimensions into a certain situation. They will consider informing humanity in a different way.

As I, Ashtar already mentioned, we (Ashtar Command) will also proceed to the next step, we will help to further implement plan B. This means: 'Approaching many people individually.' If the political leaders do not cooperate, we will continue to make the interdimensional contacts public. If Russia had announced the discloser, Europe (NATO) would soon follow. This Plan A was swept off the track and the war continued and extended. All this to save time and increase the veil.

At the UFO Congress of May 17, 2022, it was finally decided to continue the progress of this meeting in secret. The superpowers will meet this month in a closed conference. There are those in power who want to play the leading role in this discloser of the UFO phenomenon. The game of the big egos is not over yet. They dispute each other who will be the frontrunner in the space program, so that a certain 'profit' can be made here too.

"Leaders of the earth realize what really matters: Working together in unity and bringing this special news together, so that humanity feels safe."

The war has become a diversionary maneuver to avert all this. Russia has made an important point and wanted to comply with plan A. This has been stopped by NATO. A discussion ensued, which resulted in a conflict. The conflict is still ongoing and the outcome is unknown for now. They know that the war cannot be continued for much longer, because there will be great opposition from a failing economy. The recession will then become so great worldwide that the secret supporters can no longer maintain it.

Many worldwide are suffering from this condition and this must be brought to an end soon. The decisive point lies largely in science, in which those in power want to exclude the private millionaires. Here's a gap they hadn't counted on. What is overlooked is that everyone on Earth has a right to have a say, where is the voice of the people in this secrecy of the UFO facts?

We of the star dimensions are in regular contact with your rulers. Some are positive and want to make a difference. The other parties do not want to make the next step in announcing the extraterrestrial contact yet.

The diamond light will support the revelation from a loving tone, many peaceful worlds want contact with people. In the coming period humanity will be lifted up in consciousness. At this stage, the release of this special world news will be smooth and positive.

This month the Sirius Portal will also be opened, so that the lion's power amplifies everything once again. The eight of power carries within it the symbol of infinity and this stands for: Unity, peace-loving and harmony. The zero point of the new earth energy will flow together through the heart of man.

The culture of fear now fueled by war, failing economy, global famine and disease must be stopped. If too much unrest and fear is sown, great chaos ensues and some governments want to strengthen their power because of this, but imbalance is not the starting point of the Supreme Universal Councils.

The visible and invisible battle that is being waged on Earth will flow together with the revelation of the UFO contact.

The good news is that there are many individuals on Earth who are willing to work from the heart to accomplish the Divine plan. Many have already risen and many are yet to follow to carry out the unveiling and this one is: "Educating humanity about the free universal spheres and worlds and taking the UFO (light vehicles) experiences out of secrecy."

The knowledge and information about different dimensions and its frequencies will be spread and this awareness will increase. The explanation of how to make contact with the light dimensions will be distributed worldwide. In addition, the star brothers and sisters will show themselves in your sky.

The Cosmic and Universal Councils are sending out clear signals and warning the leaders of the Earth of the consequences to come. Divine laws are violated when human suffering increases. If the governments continue to work against it, we will go from the starlight, carry out plan B and approach everyone who is accessible. The hearts are opened more quickly in this cycle, because the light on earth changes and the photons are really unstoppable. This great wave of magnetically and electrically charged particles is an opening reality.

In this way we can come closer to the human being and speak through the heart. We of the starlight show ourselves in many forms and through signs in the sky. Many evidences will arise and be shared through various channels. Love we will spread, so that our intention becomes clear.

Negative stories that certain rulers want to spread about the extraterrestrial contact will not get a foothold. The power of the Light becomes enormous and the true facts are shown. We come in love and would like to connect with you.

I salute the Light in your heart

Ashtar is a consciousness with a very intelligent ability, contactees include George van Tassel, Tuella and many others.
Ashtar is an ethereal light being, a loving intelligence and he consists of pure Light and works with the healing Rainbow colors. From a wave of love I have to meet Ashtar. This revelation of the Light opened my cosmic consciousness. When this happens  then he opens the veils. The true memory who you really are comes to above. Once man was a beautiful being with a lot of Light power and special talents. The memory of an Earthly Paradise is no fantasy and is hidden deep in the heart of everyone. A very intense desire now arises to reunite all of this into wholeness again. ©Arthura
Source

Why Are We Here