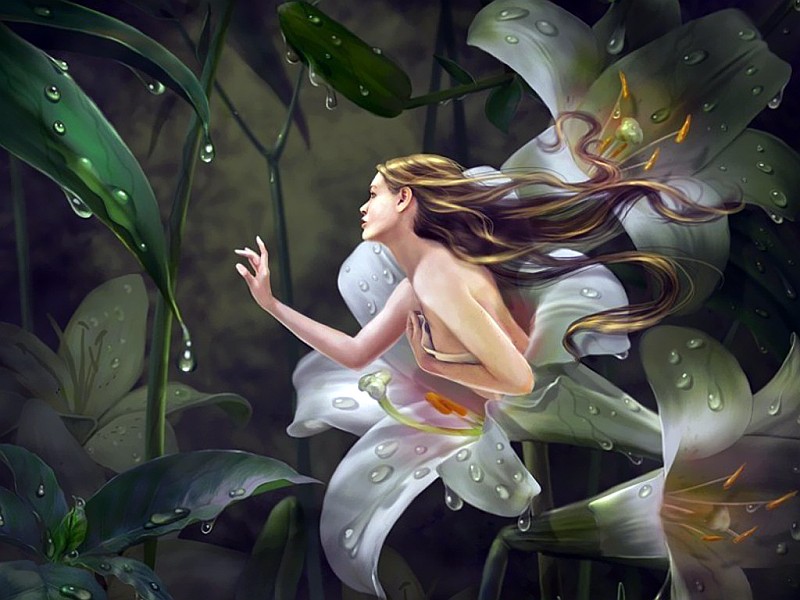 These are supernatural beings and spirits that can be either good or bad. It is believed by many who believe in fairies that they reside in a place somewhere between earth and heaven; however, many think fairies dwell on earth. Others believe they are mythical beings possessing magical powers and sometimes being close to human beings on earth. They are said to appear in various shapes being dressed in different customs. Typically a dwarf creature has green clothes and hair, lives in underground or in stone heaps, and characteristically exercises magical powers to benevolent ends.

Or, a fairy might be thought of as a diminutive, delicate feminine creature dressed in white clothing who lives in a fairyland, but intervening in human lives with good intentions. Then there is the Irish leprechaun. This tiny fairy usually wearing a cocked hat and apron can be good or bad. A cobbler by trade, his tapping makes others aware of his presence. Supposedly he possesses a hidden crock of gold, which the whereabouts he is not about to divulge unless his capturer threatens him with bodily harm. He might then divulge the whereabouts of his treasure if his capturer constantly watches him. But, he usually tricks his capturer in looking away briefly when the tiny man vanishes.

The belief in fairies seems to reach back into ancient times, being traceable both in written and oral tradition. Traces stem from the Sanskrit gandharva (semidivine celestial musicians) to the nymphs of the Greeks and Homer, the jinni of Arabic mythology, and other folk characters of the Samoans, Arctic, and other indigenous Americans. A common conception of fairies today, especially in children's fairytales, rests largely upon their depiction in old folklore tradition where they were generally described as serious and sinister. The exceptions include the tooth fairy, the fairy godmother in Cinderella, and Snow White and the seven dwarfs. 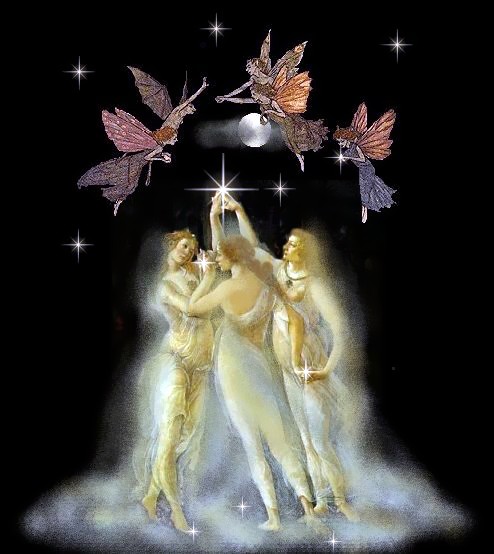 The word "fairy" is derived from the Latin fata, or fate, referring to the mythical Fates, three woman who spin and control the threads of life. The archaic English term for fairies is fays, which means "enchanted" or "bewitched."

Since the belief in fairies is universal because they are known by various folkloric names including brownie (English and Scottish folklore), elf (German folklore), dwarf (Teutonic and Germanic folklore), troll (Norse folklore), gnome (Europe, popularized by Paracelsus), pooka (Irish folklore), kobold (German folklore), leprechaun (Irish folklore), and banshee (Irish and Celtic folklore). Fairy lore is thought to exist in almost every culture and is most prevalent in Europe and the British Isles. It spread to America during the colonization period and is still strong in the Appalachians, Ozarks, and other remote mountainous regions. 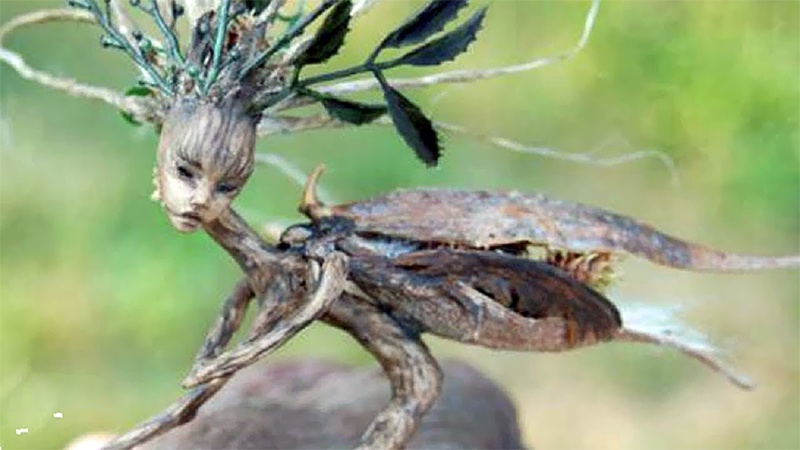 More generally fairies are believed to lived in a land where time does not exist. This Land of the Fairy, or Fairyland or Elfland, as it is called, is accessed through barrows and mounds. Fairies come to the land at night to folic and make mischief. Stories are told that they are eager to kidnap human women for wives and human children, which are more attractive than fairy children, or changelings, that they leave behind in exchange. Other fairies generally live in small groups along rivers, lakes, or in woods and forests. They resemble the elementals and devas. 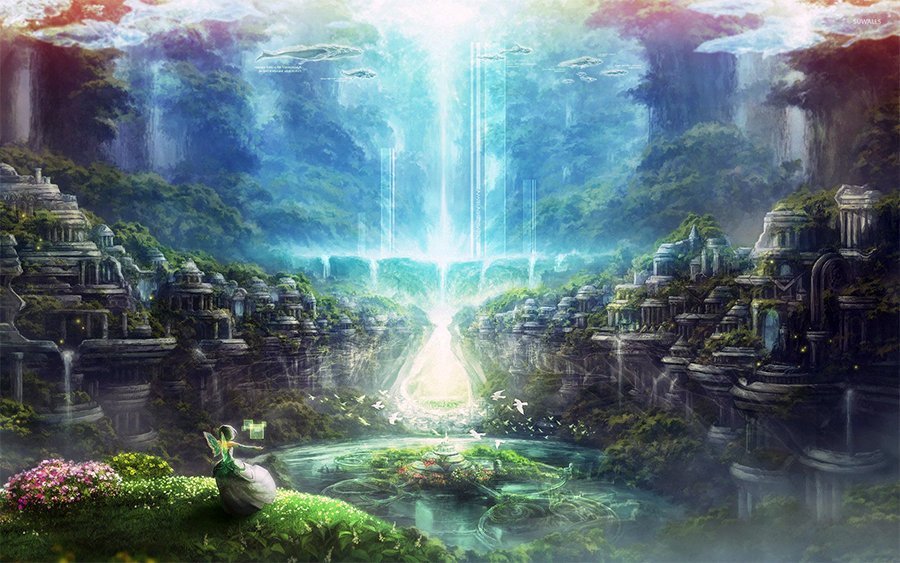 This Fairyland, or Elfland, resembles the pre-Christian abodes for the dead. Fairyland is sometimes referred to as the Land of the Ever Young, which is eternal and beautiful. People carried off to fairyland cannot return if they eat or drink there. Fairy and human lovers can marry, though only with restrictions whose violation ends the marriage, and often, the life of the human. Some female fairies are deadly to human lovers. Fairies may resemble humans in size, but can decrease to three inches (7.5 cm) or less. Female fairies may be fortune tellers, particularly prophesying at births and foretelling deaths.

The fairies were aristocratic and had monarchs; for example, in County Galway, Fin Bheara and Nuala were the king and queen. In Wales, king and queen of the fairies - known there as the Tylwyth Teg - were Gwydion ab Don and Gwenhidw. Shakespeare records the fairy-rulers in A Midsummer Night's Dream as Oberon and Titania. 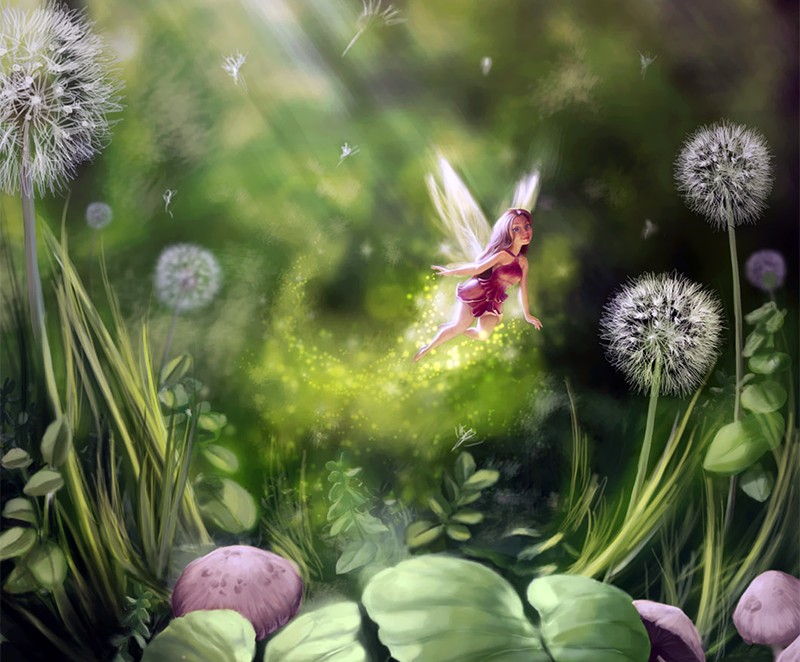 These are some of the theories that speculate the origins of fairies:

Fairies are unbaptized souls. They are souls caught up in a netherland land, not good enough to enter heaven, nor bad enough to deserve hell. Such a place is frequently referred to as limbo.

Fairies are the fallen angels. Fairies were among the angels loyal to Lucifer. They were cast out of heaven with him to plunge into hell, but suddenly God stopped them in mid-flight and condemned them to remain where they were. Some were in the air, some in the earth and some in the seas and rivers. Such belief is widespread in fairy lore of Ireland, Scotland, and Scandinavia.

Fairies are nature spirits. Somewhat analogous to the fallen-angel theory, this theory holds that fairies are among the many spirits that populate all things and places in the earth.

Fairies are diminutive human beings. There is evidence that small-structured races populated parts of Europe and the British Isles in the Neolithic and Bronze Ages, before the spread of the Celts. In Ireland, they were known as the Thuathe de Danaan. They resided in barrows and in shelters burrowed under hills and mounds. They were hard working but shy, and, as stronger peoples invaded their land and captured their iron weaponry, they retreated to the woodlands to live a secretive life. Being pagan, they continued to worship the pagan deities. They were in union with nature and possessed keen psychic senses. Their skills and trades allowed them to lead somewhat normal lives while raising diminutive cattle and horses. There was sporadic guerilla warfare against invaders as described in the legends of Robin Hood and Rob Roy. 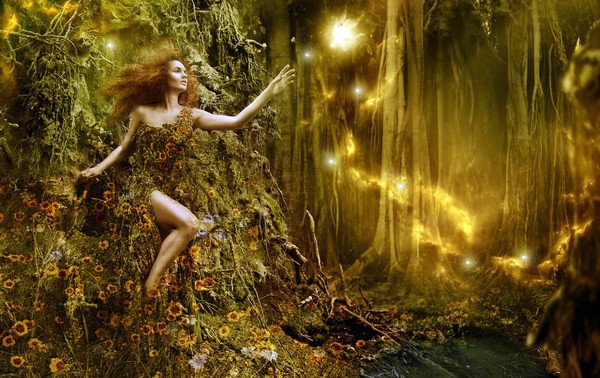 Originally the elusive fairy races were regarded with suspicion by larger races. Belief in them was thought to be superstitious. However, gradually more people began endowing these little people with magical characteristics. The races such as the Lapps, Picts and Romano-British-Iberian peoples, were not so small as to be unable to mingle with the Celts, Normans and Saxons. Although many became servants and serfs, others married and mixed bloodlines. Until the 13th century, having fairy blood was admired.

There is much evidence of fairy lore in relation to witchcraft. The British anthropologist Margaret A. Murray and other historians state that the real "little people" gradually became identified with witches. During the 16th and 17th centuries, when belief in fairies was at its peak, the activities of fairies and witches were frequently combined. Both cast and broke spells; they both healed people, and divined lost objects and the future. Both danced and sang beneath the moon-often together-and were said to have trafficked with the Devil. Both practiced metamorphosis, flying and levitation, and could cause others to levitate. As well, both supposedly stole unbaptized babies, poisoned people, and stole horses that they rode hard and fast to their sabbats in the night. Both avoided salt and were repelled by iron.

King James I of England, in Daemonologie, his book about witches, called Diana, the goddess of witches, and the "Queen of Fairie." Oberon, the name of the King of Fairies, also was the name of a demon summoned by magicians. Fairies were also claimed to be familiars of witches. Therefore, it is not difficult to see why fairies figured into witch trials. The trials richest in details occurred in the British Isles. 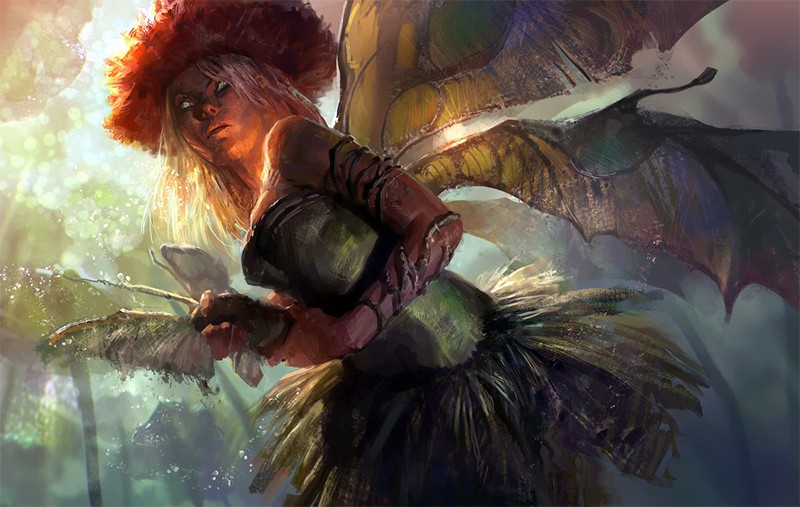 Currently Neo-Pagan Witches believe in fairies and some see them clairvoyantly. Some Witches say their Craft was passed down by fairies through the generations of their families.Fairy lore is particularly prevalent in Ireland, Cornwall, Wales, and Scotland. Fairies are common in literature from the Middle Ages on and appear in the writings of the Italians Matteo Boiardo and Ludovico Ariosto, the English poet Edmund Spenser, the Frenchman Charles Perrault, and the Dane Hans Christian Andersen, among others. A.G.H.

The word Fairy is derived from the ancient "faunoe o fatuoe" which, in the pagan mythology, indicated the faun's (deer) companions, creatures endowed with power of foretelling the future and ruling the human events. The word Fairy also comes from "fatigue", which in Middle Ages was synonymous with "wild woman", that is woman of woods, waters and, in general, of the natural world.

Fairies are so prevalent in mythical culture that it's natural to wonder where they came from. Different societies have come up with very different explanations of the origins of 'the little people'. 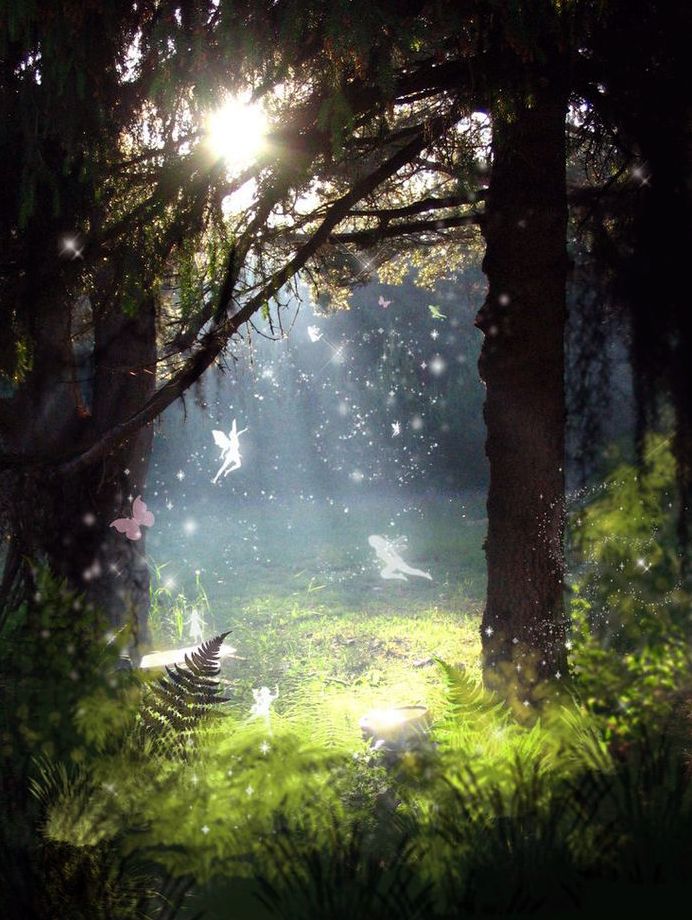 The Little People are said to be the dispossessed early tribes of the British Isles.They faded away into uninhabited places, growing smaller and smaller with time as they were forgotten and passed into legend. The Tuatha de Danann, People of the Goddess Dana, ruled Ireland before the Milesian invasion. They were driven underground where they became the Daoine Sidhe fairies.

The Irish believe that the fairies are a previously conquered society, the Tuatha De Danaan (People of the Goddess Dana), who were driven into hiding when the Celts invaded Ireland. The Pagan gods of the Tuatha, skilled in building and magic, went underground to live in the tombs and mounds they had built. Hidden from sight, they grew smaller in the popular imagination until they turned into fairies. 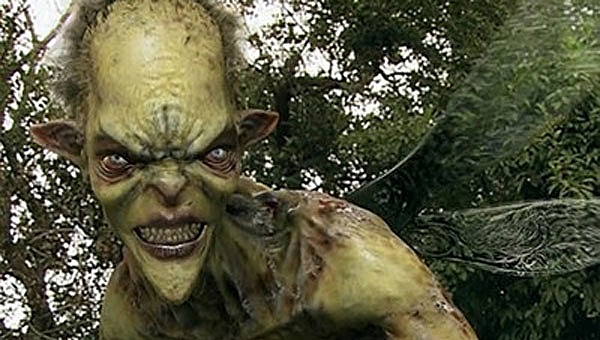 Other cultures believe that fairies are the souls of the dead, people not good enough to enter Heaven yet not bad enough for Hell. They wander the Netherland in between and are occasionally seen by humans. Along a similar theme, fairies are also believed to be angels that had been cast out of Heaven. Some fell into the sea and some onto the land, where they would do no harm if left alone.

In Wales, fairies are thought to be a race of invisible spiritual beings living in a world of their own. Some people also believe that fairies were originally local gods or nature spirits that dwindled in majesty and size over time. 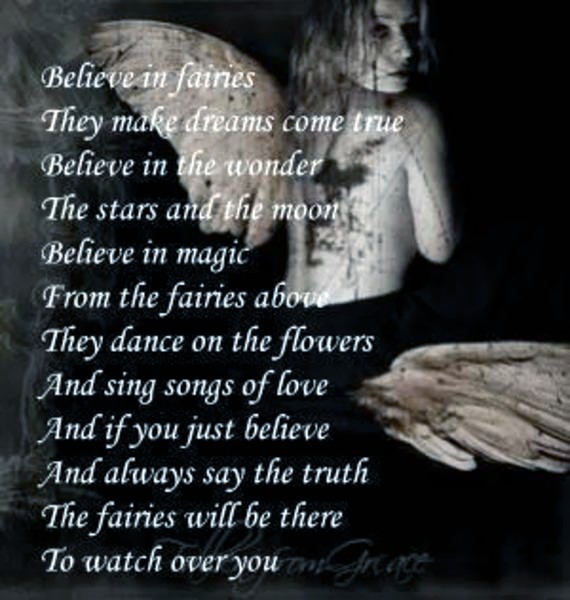