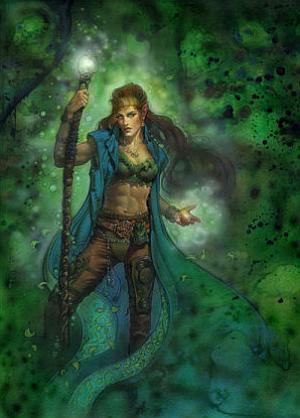 When the Tuatha de Danaan, also known as Tuatha dé Danann, arrived with their flying ships on the Irish coast they were initially unable to land due to a energy field created by the Fomorians. They had to encircle Ireland nine times before they found a way through the energy field and were able land in County Leitrim, which is considering the short coastline of this county quite an achievement in itself. The Tuatha de Danaan were determined to stay in Ireland at any costs. They even destroyed their own ships to make a retreat impossible.

Apart from the mishap during their arrival the magical powers of the Tuatha de Danaan degenerated Fomorian magic to children's party tricks. Unlike their close relatives the Fir Bolg the Tuatha de Danaan has managed to avoid slavery in their homeland by wandering the world.

The journey of the Tuatha de Danaan have clearly racked the brains of the Christian scribes. Some versions are suggesting a journey from the Scythian area, over mainland Europe to Scandinavia and eventually to the British Isles and Ireland. During their journey the Tuatha de Danaan learned all conceivable and inconceivable skills to perfection. In Scandinavia they got acquainted with the Goddess of Craftsmanship, Danu, and adopted her name. It is likely though that the name Tuatha de Danaan, literally translated as People of the Goddess Danu, does not refer to the Goddess herself, but to her sphere of activities, hence People of the Goddess of Craftsmanship, or in short Dextrous Folks. 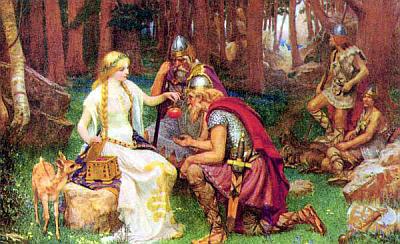 Both the religiously correct version as the mythological version show great respect for the skills and powers of the Tuatha de Danaan. Not only did they master profane arts and crafts like poetry, music, forging and warfare, but also magic. The Tuatha de Danaan could go back and forth in time and between worlds. They could manipulate the weather and changing their appearance was a piece of cake.

In folklore they are depicted as fairies. A mythological Irish fairy can not be compared with the kind and lovely creatures like the Flower Fairies. Irish fairies are beings just like humans, but immortal, forever young and never fading, who are present in the normal world but can not be seen by mortals. 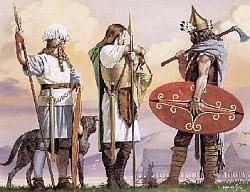 The Fir Bolg were no match for these supernatural creatures in the First Battle of Mag Tuiredh.

By marrying the Tuatha de Danaan Brigit the half-Fomorian Bres would become heir of the throne. The deal turned out to be a disaster and the Fomorians gained more and more control over Ireland.

Bres revealed himself as a tyrannical leader degrading important members of the Tuatha de Danaan such as The Dagda and Ogimos, who gave the Ogham Alphabet to the humans at a later stage.

To make matters worse there was no generosity and hospitality in Bres' household. Soon Bres was overthrown by Lugh and Nuada, equipped with a silver hand made by the druid Diancecht, became king again. Released from blood relationships with the Fomorians Lugh led the Tuatha de Danaan in the Second Battle of Mag Tuiredh.

Lugh defeated the Fomorian champion Balor, who had a poisonous eye, with a mirror-like shield and beheaded him. After this battle the Fomorians were permanently driven out of Ireland and the Tuatha de Danaan spread over Ulster, Míde, Leinster and Munster.

The Hill of Tara, which had become the royal centre of Ireland since the Fir Bolg, remained the seat of the Ard Rí, or High King, under the Tuatha de Danaan.

When the Tuatha de Danaan arrived in Ireland they brought with them the Four Treasures of Ireland. These treasure were the Lia Fail, the Sword of Nuada, the Spear of Lugh and the Cauldron of the Dagda.

The Lia Fail, sometimes also known as Stone of Destiny or Stone of Knowledge, originated from the city of Falias, the northern city of the mythological Four Cities. It is said the stone will cry when touched by the rightful king of Tara. The story and history of the Lia Fail is quite confusing because there are at least two artefacts with the same name. The other Stone of Destiny is said to be brought to Ireland by Jeremiah and is better known as the Stone of Scone and resides either in Scone Castle or in Edinburgh Castle, both in Scotland.

From the eastern city of Gorias came the sword An Fragarach, or The Answerer. This was a magical sword that cut through any armour and no one could escape from.

An other weapon which never missed its target and always came back to the hand that threw it was the Spear of Lugh. This Spear came from Finias, the southern city.

The Dagda, or The Good God, finally brought the Cauldron of Bounty with him from the city of Murias in the west. The Cauldron could regenerate enough food for any number of people.

Eventually the Tuatha de Danaan were defeated by the Milesians or Gaels. Mythical as they were the Tuatha de Danaan decided to live in an other dimension of space and time called Tír na nÓg, or Land of the Young - / - Land of Eternal Youth. Tír na nÓg was connected with our mortal world by the famous Irish portal and passage tombs.

These entrances, with the passage tomb at Newgrange taking the lead, are nowadays major attractions for visitors and objects of new-age-like fantasies.