The Hundredth Division
A+ A A-

Is DMT the Gateway to Hell? 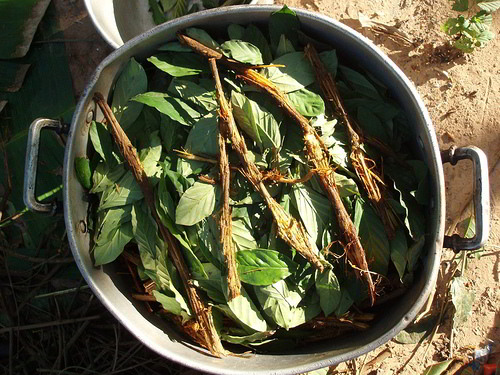 DMT (dimethyltryptamine) is a drug surrounded by mystery and mysticism… but is DMT the gateway to Hell?  Is DMT being used by “the ruling elite” to communicate with other worlds?  Perhaps even to open a gateway between this world and others? Perhaps to the point that the “Globalists” are counting on people to use the substance in quantity to facilitate opening the gateway?

Please note right from the start that DMT remains illegal in the United States.  Now, onward…

In a now-viral recording of InfoWars’ abrasive Alex Jones, he rants that government officials, special operations groups, and intelligence agencies are “gobbling” DMT, and the “Globalists” believe they are contacting “interdimensional aliens” by using the drug.  They believe they are in contact with these entities and are being directed by them, being told they can have eternal life, total power, and total control.  He said the “clockwork elves” that seem to be a common theme in hallucinations by use of DMT told them to build certain technologies and have even told them how, and these otherworldly entities are doing this for one reason – to open the gateway between our world and theirs. Mr. Jones consistently says he doesn’t know if it’s real or not, but speculates that the beings users of DMT report contacting could be demons or aliens. He rather senselessly exclaimed, “We are in so  much trouble, lunatic elites, talking to little grey men who are telling them they can have eternal life. Real or not, the elites believe they are in contact.  They believe its real.   Little elves are telling them do this do this.  We learned this technology from the clockwork elves.  The pentagon in whole is in this stuff for 40 or 50 years.  They put this stuff out to people, they want you taking it, they want to open something up.  Why does the Bible say don’t do it? Because it opens up other worlds.”

Mr. Jones also referenced the Large Hadron Collider as an example of what these “clockwork elves” wanted built in “exchange” for their alleged offers of eternal life and power untold. If the recently discovered particle that scientists believe may be the Higgs boson (the “God” particle), discovered because of the work with the Hadron Collider, is in fact the harbinger of doom to universal stability, the most pressing question toward Mr. Jones’ ranting theory is, “Why?” 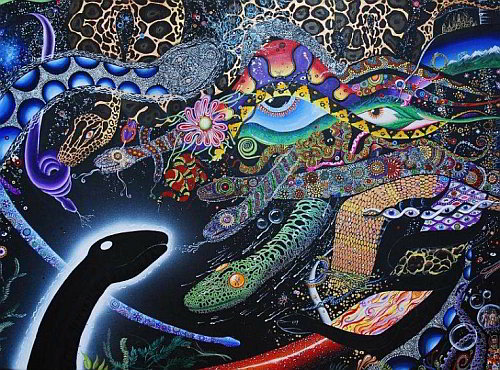 Is DMT the Gateway to Hell?  Mr. Jones Appears to Believe So

Hmmmm.  It appears Mr. Jones is afraid of what will happen if everyone starts using DMT.  And he thinks the government and “Globalists” may be encouraging just that.

Users reported entering other realities and having contact with other sentient beings, and these experiences were generally considered  ”real” to the users and not drug-induced hallucinations.  Entities in the “other worlds” generally imparted information to users about themselves and about the universe.  One user reported, “I have seen crazier stuff on psychedelics that lost its credibility, however DMT is the only thing that radiates undeniable truth.”

All users reported a feeling of lucidity, not feeling impaired, and having the experience in what could be considered a normal state of consciousness.  All users also reported that upon initial ingestion of the substance, an intense physical reaction occurred, but generally passed very quickly.  Some users reported this reaction as negative – feeling physically sick or in distress; others reported it as a feeling of warmth with increased heart rate.

All users shared a feeling of “ineffability” once the DMT experience had been resolved; in other words, they were not able to describe the experience with the limited tool of language.  Users expressed frustration that language was not adequate, much less powerful enough, to correctly relate the intensity of the experience.

Another commonality was descriptions of extreme intensity, with visual imagery bombarding the users so rapidly upon the ingestion of the substance that they had trouble making sense of it.  Most reported a feeling of being out of control over their mind and body and became anxious, though this feeling also appeared to pass quickly. Some became terrified that they were dying.

Perhaps the most interesting common theme of the study’s DMT users is a feeling of spritual awakening.  ”Participants regularly gained insight into themselves and the nature of reality. Insights were retained and incorporated into users’ lives after resolution of the DMT experience. Alternatively, this theme was simply expressed as a profound religious or spiritual experience.”

All users indicated they felt distortions in time and space, the participants felt that they had not only transcended space and time, but also the limitations of themselves and their egos.

Finally, all users reported feeling a familiarity with the “space” of the DMT experience, as if they had been there before or perhaps had never left (but had been polluted by embodiment).

Is DMT the Gateway to Hell?  Not According to Terrence McKenna

In most experiments with DMT, including the famous and comprehensive research conducted by Dr. Rick Straussman, users of DMT did report lucid and “real” contact with other worlds and other beings.  Some users felt that the beings were helpful, trying to share information and relate universal truths.  Some users felt that they were suddenly transported to another place inhabited by other beings, but those beings were rather irritated at the person’s sudden appearance.

In descriptions from regular users of DMT is where we find the commonality of the “clockwork elves, ” or as Terrence McKenna called them, the “self transforming machine elves.” He continued, “And meanwhile, these things are saying: “Do not give way to amazement; Control your wonder.” in other words, they try to bring you down. They say, “Don’t just goof out on this; pay attention. PAY ATTENTION… to what we’re doing.” “OK, what’re you doing?…”

And then, Mr. McKenna said something very interesting: “…don’t let these guys get behind you. They are tricky. And their elfin humor may not be your idea of a good time.”

He explained (or tried to) further, “And I said to myself, where have I had, before, this feeling that I’m having now. It’s a feeling of being with people that I can’t trust, but who want to help me, and who seem to be trying to, uh, cut a deal. That was the word that gave me the clue: “deal”.  And so then I said: “Aha the creatures in the DMT flash are Traders…” They’re Traders. And that’s what this weird feeling is – it’s a business environment in there. We’re having a business meeting. They’re saying… and then the objects! Then I remembered- the objects… they’re trade goods! They’re saying: “How about thissss! How about This!”

“What do they want? What do I have that they want?… They’re meme traders, is what it is. And I think that what they wanted, and got, and took – without bothering to even say a word about it – was everything I knew about the “I Ching”. And they’re like art collectors. They say “well, the idea is primitive, and primitive in its execution, but with a certain kind of internal integrity that one really must respect…” So they’re primitive art collectors, and what they left me with, then, was, uh, my own, you know, their model of time. Which is the closest thing to one of these hyperdimensional objects. The objects themselves cannot exist in this world. But the blueprints of them can. And this afternoon, if the computers are up and running, I will run through this ‘time idea’ with you.”

“And I think I will be able to convince you that it has a weirdly crafted patina to it, that, the feeling is it didn’t spring from human minds, it, it is a creature of another kind of mental universe. And I think, you know, aside from the crisis on this planet and our own personal difficulties this is the real challenge of the psychedelic thing; is to meet the inhabitants and trade with them. And set up a relationship. The notion traders. They can trade hyperspacial notions from across the cosmos. And this may be all the extraterrestrial contact that we’re, uh, going to be vouch-safed, you know?”

Triple-hmmmm.  Traders?  Deals?  The objects that they are trading cannot exist in this world – but the blueprints of them can?  So much so that Mr. McKenna felt he could use a computer to demonstrate?

Is DMT the Gateway to Hell?  You Decide… and Tell Us

With this information, it seems we can develop three theories regarding the use of DMT and the constituent themes of users in research:

First, let’s just say that DMT is a hallucinogenic drug and nothing more.  If that is the case, then those constituent themes, or commonalities in experiences by users, are just products of the drug’s interaction with “normal” brain chemistry that causes a profound experiential memory. This, of course, would be the easiest way to explain the effects of DMT but does nothing to explain why Alex Jones would almost insanely babble on about “the ruling elite” and a “gateway.”

Secondly, let’s hypothesize that DMT (which some say is organically produced in our bodies and most notably at the time of death) is a substance that connects us with the Whole, whatever the “Whole” may be.  We can theorize that DMT allows us to somehow break the bonds and limitations of  the construction/perception of embodiment and bring us back into our actual state as beings consisting entirely of energy (also scientifically true).

Thirdly, we could say that DMT causes a reaction that is part hallucinogen and part interdimensional experience.  We could even say that meeting sentient beings that we otherwise are not aware of is part of the interdimensional experience allowed by the freedom of being under the influence of DMT.  We could even say that these beings are indeed “traders,” happy to see us in their world so that we can be amazed by their “things’ and barter for them.  Mr. McKenna, unhelpfully, does not mention what we could possibly have with value for trade with these beings… except perhaps the power and perception of embodiment that is necessary to act in this world.  Which could be something our little “clockwork elves” might like to have, especially if they are “demons” who are trying to open a gateway to cross over.

Tell us what YOU think.

Whatsapp
back to top
How Do I Know If It’s My Soul or My Ego Talking?
Mastering Fear
The Commercialization of Spirituality - A Multi-Billion Dollar Corporate Takeover!

We have 1339 guests and no members online