Is the Sharing Economy Here Yet?

Is the Sharing Economy Here Yet? 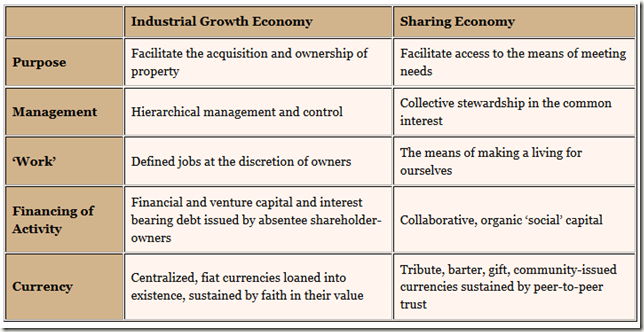 Most of the Western world’s financial and commercial activity occurs within what we’ve come to call the Industrial Growth Economy. This economy has been around since the start of the industrial age roughly a couple of centuries ago. It requires exponential (and ultimately unsustainable) growth in production and consumption of goods and services to survive. It also requires the use of ‘fiat currency’ (state-issued notes, deemed by the state to have value) for all transactions.

The poor have always lived principally in this ancient economy — let’s call it the Sharing Economy, a name made popular by Charles Eisenstein in his essays and talks and his book Sacred Economics. That’s because the poor don’t have any ‘currency’ in the Industrial Growth Economy, so they are shut out of it. Despite the globalization of the Industrial Growth Economy in recent decades, that hasn’t changed much.

But it’s complex — these two economies exist side by side, and everyone participates to a greater or lesser extent in both. Even the poorest pay what they can with what cash they can earn, beg, borrow or steal, and if they live in cities (which they increasingly do) they are forced to find money to pay for food (since they can’t grow it themselves any more), and often even to pay for ‘security’ (extortion and shakedowns). And even the richest, philanthropy aside, participate in the Sharing Economy — their spouses may raise their children without ‘pay’ as such, for example.

The chart above attempts to differentiate these two economies.

The complexity of living with a foot in each economy leads to some unexpected results. Our tax, legal and accounting systems are built around the Industrial Growth Economy and don’t deal well with Sharing Economy activities. Our measurement of economic prosperity is based on GDP, which recognizes paid child care and the clean-up of pollution as positive GDP-creating activities, but not unpaid child care or pollution prevention (unless that prevention activity is ‘paid for’). Balance sheets and income statements aren’t suited to showing the value of Sharing Economy activities. And as Janelle Orsi has explained, complex, convoluted laws designed to inhibit abuse of power by large multinational corporations often make small Sharing Economy start-ups and operations impossible, drowning them (mostly unintentionally) in red tape.

So what good is the Sharing Economy, beyond something we will have to have in place when the Industrial Growth Economy repeatedly stumbles and finally (and probably gradually) collapses?

Its greatest good is that it allows people who are partly or totally shut out of the Industrial Growth Economy to obtain what they need and offer their gifts when otherwise they could not. It’s how much of the world copes with little or no fiat money.

So we should try to encourage more Sharing Economy activity, and to ‘starve’ the Industrial Growth Economy by participating in it as little as possible. The means to do that are pretty obvious (e.g. boycott large corporations, create a living for ourselves instead of working for large organizations, encourage public sector activities and reverse the trend to privatize everything). But since the line between the two economies is pretty grey, we need some means to assess which activities are in which economy, and which are kind of in between.

I’ve had several discussions about this in recent weeks, and there seems to be no clear consensus or ‘formula’ for assessing where different activities and organizations fit, and hence whether we should be encouraging them or not. What I did come up with is a set of five general criteria that tend to make an activity more Sharing Economy-like and less Industrial Growth Economy-like. Here they are:

A. Well-being created — Does the activity produce real value for the recipients of goods and services?
B. Ethical behaviour / non-exploitative & sustainable — Is the activity that funds, accompanies and/or ensues from the transaction moral?
C. Generosity — Is the gifting bona fide, without ulterior motive or reward?
D. Non-reciprocality — Is the gift without cost or strings (tacit or explicit) attached?
E. Non-monetization (in fiat currency) — Does the activity avoid the use of money? And if any money changes hands, is it in a local community-based non-debt-creating currency?

I would argue that something needs to meet at least three of these criteria to really qualify as a Sharing Economy activity, and that the more criteria it meets, the better. So a true gift, along the lines of the repentant Ebenezer Scrooge’s Christmas Day gifts, would score 5 out of 5. Here’s how I would score some less obvious activities, in declining order of ‘sharing’:

As the economy continues to wobble and the rest of the middle class disappears, more and more of us will be, both purposefully and of necessity, engaging more with the Sharing Economy. In the meantime, many communities are starting to create local directories and maps of Sharing Economy activities. (I participated recently in a Sharing Economy ‘map jam’ in Eugene, Oregon, hosted by Tree and Kindista, and they’re great fun and terrific learning and networking opportunities.)

When you’re tied to the Industrial Growth Economy (as most of us in affluent nations are), it may seem like a huge leap to a Sharing Economy where there is no accounting, no money changing hands, and absolute trust that one’s local community will give you what you need, and that you should give what you can offer without asking for compensation. But up until a couple of millennia ago that’s how we all lived, and until a couple of centuries ago that was still the main economy in most people’s lives. There’s lots we can do in the meantime practicing making the transition gradually, so that when the bottom falls out of the Industrial Growth Economy it will be a manageable last step to the Sharing Economy that will replace it. And as a bonus, gifting and re-use are better for the environment as well.

The next time you’re thinking of buying, or selling, or discarding something, imagine how you might share it instead — move the activity up a couple of points on the 5-point scale. What do you have to offer that’s surplus to your immediate needs that someone else in your community could use? And what needs do you have that, instead of being satisfied at the mall cash register, could be satisfied by another’s offer? And what could you do with others in your community, through organization, ‘map jams’ and directories, to make it easier for the Sharing Economy to bloom there?

Dave Pollard's environmental philosophy, creative works, business papers and essays. In search of a better way to live and make a living, and a better understanding of how the world really works.

Thank you!
ॐ Namasté - Blessings!
"Life is an echo, what you send out comes back."
© 2008-2022 crystalwind.ca. All rights reserved.
Habits, Addictions, And The Ego
Healing The Wound(s) Within The Heart Chakra
Learning to be angry
Get This App Now!