The Tragic Spread of CoVid-19 Misinformation
A+ A A- 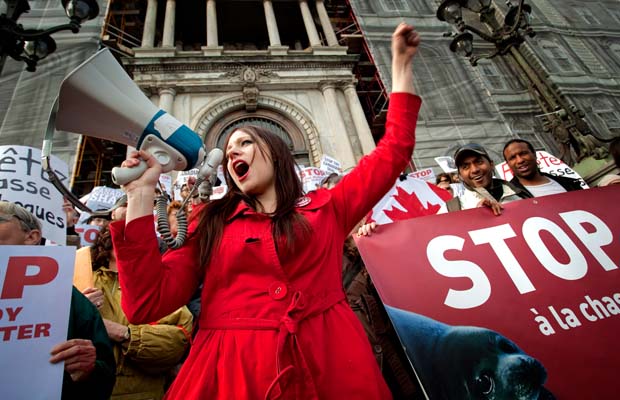 Quebec has been a province known to have the worst track record for animal cruelty, but that all changes today. The bill states that “animals are not things. They are sentient beings and have biological needs.” The proposed legislation will impose heavy fine and jail time for cited serial animal abusers and the bill even goes as far as including one of the smallest beings a goldfish. You can’t just flush your gold fish down a toilet anymore even if you want to.

“We know scientifically that fish are sentient and can feel pain,” Devine said “If animals are capable of suffering then they should be included (in the bill).”

For a lot of us, we already know that animals are sentient, but in Quebec animals currently have the same rights as your couch.  Manitoba, Ontario and British Columbia, have the strongest animal welfare initiatives in the country and Quebec has been inspired to follow suit.

According to the Globe and Mail “The biggest change (in the bill) is that up to now, an animal in Quebec is considered as a movable, like a piece of equipment,” Paradis said. “It goes from that to being a sentient being.”

Paradis believes his bill will transform Quebec from the jurisdiction with some of the least strict animal-welfare rules in North America — it is considered the puppy-mill capital of the continent — to one with some of the toughest.

Paradis also looked to France, which updated its own laws last January to change the status of animals to sentient beings from their prior status of movable property.

The bill has separate rules for pet owners, farmers with livestock, owners of pet shops, or people who sell animal-based products such as furs.

Pet owners “must ensure that the animal’s welfare and safety are not compromised,” meaning domesticated animals have to receive “care that is consistent with (their) biological needs,” the bill states.

Farmers must guarantee that their animals are “treated with dignity as much as possible” from the moment they are born to the day they are slaughtered.

But farm animals don’t get the same protection as pets. They must be treated “in accordance with generally recognized rules,” the bill reads.

That, says the head of animal advocacy for the SPCA in Montreal, means chickens, will still be allowed to be kept in enclosures no wider than a sheet of paper — called battery cages — for their entire lives. “Whatever the (food) industry does on a wide scale is exempt,” said Alanna Devine.“I don’t know if this means they’ll be treated with dignity and respect.” She said the bill is unclear regarding the status of many wild and exotic animals and those found in zoos.”- see more at Globe and Mail

This is just one small step in the right direction. There is still much work to do to ensure that all animals, farmed or “zood” are getting their appropriate needs met, as well as being treated with respect.

Whatsapp
back to top
CoVid-19 Update #9: What We Still Don’t Know
The Green Pauper
Working with Fear

We have 714 guests and no members online