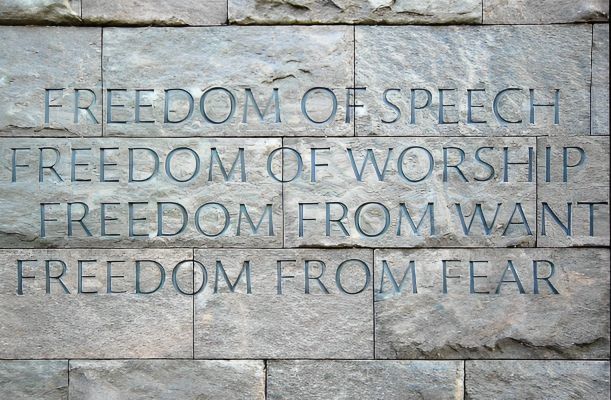 The Four Freedoms of FDR Are the Foundation of Democracy and Human Well-Being.

Today we celebrate “The Four Freedoms,” said by Franklin Delano Roosevelt to be the foundations of democracy and human well-being. Given much of the fascist talk, treason, sedition, and fear in the air these days, this may provide a more timeless perspective of what the US is supposed to stand for.

While FDR had his flaws, he was still one of the world’s great humanitarians. “The Four Freedoms” comes from his January 6, 1941 State of the Union speech, and remains a benchmark for a more ideal world. Would that we had made better progress in the 82 years since he offered us these words.

This is a very powerful speech given when most of Europe, Africa, Asia, and Australia were already plunged into WWII, and America was polarized between isolationists, those who favored Germany and Italy versus those who favored England and France, and those who wanted peace in the face of an encroaching global war. Some of these words still are relevant today, since circumstances are funny that way. History does seem to repeat itself far too often, especially in destructive ways.

By all means, if you want to research the entire speech, it’s on line. It raises some chillingly similar issues we confront today, especially about national policy, expenditures versus national necessities, the reasons why we had to support democracy, and the clash in the vision for what America was versus what it could be.

Today’s post skips the first parts where he is addressing the war, the justifications for our national policy regarding that war, Lend-Lease, and the lead up to that part of the speech where he articulates “the Four Freedoms.”

Delivered 6 January, 1941, to the Congress of the United States

... The nation takes great satisfaction and much strength from the things which have been done to make its people conscious of their individual stake in the preservation of democratic life in America. Those things have toughened the fiber of our people, have renewed their faith and strengthened their devotion to the institutions we make ready to protect.

Certainly this is no time for any of us to stop thinking about the social and economic problems which are the root cause of the social revolution which is today a supreme factor in the world. For there is nothing mysterious about the foundations of a healthy and strong democracy.

The basic things expected by our people of their political and economic systems are simple. They are:

Equality of opportunity for youth and for others.

Jobs for those who can work.

Security for those who need it.

The ending of special privilege for the few.

The preservation of civil liberties for all.

The enjoyment -- The enjoyment of the fruits of scientific progress in a wider and constantly rising standard of living.

These are the simple, the basic things that must never be lost sight of in the turmoil and unbelievable complexity of our modern world. The inner and abiding strength of our economic and political systems is dependent upon the degree to which they fulfill these expectations.

Many subjects connected with our social economy call for immediate improvement. As examples:

We should bring more citizens under the coverage of old-age pensions and unemployment insurance.

We should widen the opportunities for adequate medical care.

We should plan a better system by which persons deserving or needing gainful employment may obtain it.

I have called for personal sacrifice, and I am assured of the willingness of almost all Americans to respond to that call. A part of the sacrifice means the payment of more money in taxes. In my budget message I will recommend that a greater portion of this great defense program be paid for from taxation than we are paying for today. No person should try, or be allowed to get rich out of the program, and the principle of tax payments in accordance with ability to pay should be constantly before our eyes to guide our legislation.

If the Congress maintains these principles the voters, putting patriotism ahead pocketbooks, will give you their applause.

In the future days, which we seek to make secure, we look forward to a world founded upon four essential human freedoms.

The first is freedom of speech and expression -- everywhere in the world.

The second is freedom of every person to worship God in his own way -- everywhere in the world.

The third is freedom from want, which, translated into world terms, means economic understandings which will secure to every nation a healthy peacetime life for its inhabitants -- everywhere in the world.

The fourth is freedom from fear, which, translated into world terms, means a world-wide reduction of armaments to such a point and in such a thorough fashion that no nation will be in a position to commit an act of physical aggression against any neighbor -- anywhere in the world.

That is no vision of a distant millennium. It is a definite basis for a kind of world attainable in our own time and generation. That kind of world is the very antithesis of the so-called “new order” of tyranny which the dictators seek to create with the crash of a bomb.

To that new order we oppose the greater conception -- the moral order. A good society is able to face schemes of world domination and foreign revolutions alike without fear.

Since the beginning of our American history we have been engaged in change, in a perpetual, peaceful revolution, a revolution which goes on steadily, quietly, adjusting itself to changing conditions without the concentration camp or the quicklime in the ditch. The world order which we seek is the cooperation of free countries, working together in a friendly, civilized society.

This nation has placed its destiny in the hands and heads and hearts of its millions of free men and women, and its faith in freedom under the guidance of God. Freedom means the supremacy of human rights everywhere. Our support goes to those who struggle to gain those rights and keep them. Our strength is our unity of purpose.

To that high concept there can be no end save victory.

Would that our nation, and all nations, aspired to such lofty ideals. Would that our country still lived up to that promise. The world would truly be a better place for us all. And to that end, it begins with us.

Freedom of Speech and Expression. Freedom of Individual Worship of God. These are enshrined in the Constitution.

Welcome to a vision of the Age of Aquarius, articulated by one of the greatest Aquarians of all time, Franklin Delano Roosevelt.

Thank you!
ॐ Namasté - Blessings!
"Life is an echo, what you send out comes back."
© 2008-2022 crystalwind.ca. All rights reserved.
Thoughts Are Optional
Dalai Lama on Paris & Syria – A Message for Peace
Preventing the effects of childhood trauma
Get This App Now!