The Value of “Sloth” – Expanding Our Perceptions for Greater Wisdom 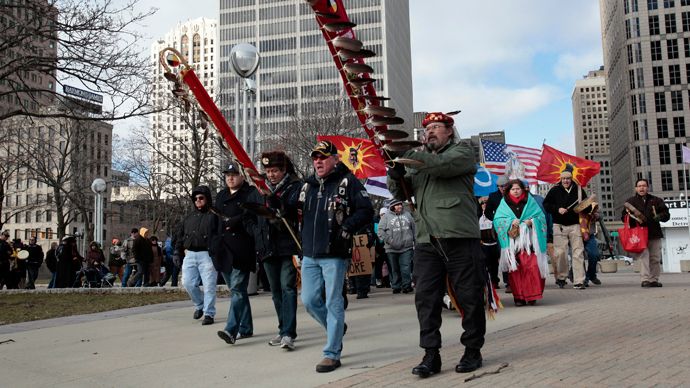 An alliance of Native American communities has promised to block construction of the northern leg of the Keystone XL oil pipeline, which, if approved by President Barack Obama, would carry crude tar sands oil from western Canada through the US to Texas.

In a joint statement entitled ‘No Keystone XL pipeline will cross Lakota lands,’ Honor the Earth, the Oglala Sioux Nation, Owe Aku, and Protect the Sacred declared their support for resistance action against energy corporation TransCanada’s building of the parts of the pipeline planned to cut through Montana, South Dakota, and Nebraska before meeting with a constructed line in Kansas. The existing line would then move the crude tar sands through Oklahoma and into Texas for refineries on the Gulf Coast.

"We stand with the Lakota Nation, we stand on the side of protecting sacred water, we stand for Indigenous land-based lifeways which will NOT be corrupted by a hazardous, toxic pipeline,” the groups said in the statement.

The groups said the Lakota Nation – a sovereign governmental body – is ready to step up.

“KXL will NOT cross their treaty territory, which extends past the reservation boundaries. Their horses are ready. So are ours.”

Members of seven Lakota Nation tribes - as well as indigenous communities in Idaho, Oklahoma, Montana, Nebraska, and Oregon - have been preparing nonviolent direct actions for the last two years in hopes of stopping the pipeline’s construction.

“It will band all Lakota to live together and you can’t cross a living area if it’s occupied,” said Greg Grey Cloud of the Rosebud Sioux Tribe, according to Aboriginal Peoples Television Network. “If it does get approved we aim to stop it.” 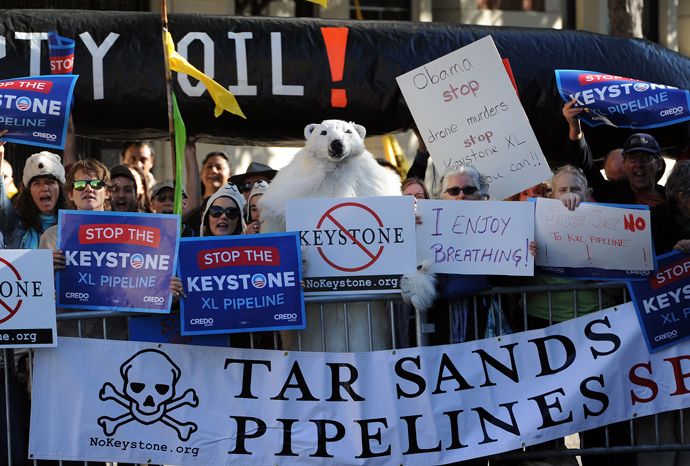 "We go up to wherever we've been invited, usually along pipeline routes," Kent Lebsock, director of the Owe Aku International Justice Project, told Common Dreams. "We have three-day trainings on nonviolent direct action. This includes blockade tactics, and discipline is a big part of the training as well. We did nine of them last summer and fall, all the way from Montana to South Dakota, as well as teach-ins in Colorado and a training camp in Oklahoma."

The groups have expressed solidarity with Canadian indigenous peoples who have pushed against the energy-intensive development of tar sands.

Lebsock told Common Dreams that one “example of this nonviolent direct action” occurred in March 2012, when communities from the Pine Ridge Reservation in South Dakota successfully employed a blockade to stop the delivery of pipeline parts through the reservation.

The promised actions come days after the US State Department released on Friday a report on the environmental impact of Keystone XL, raising few objections to the prospective ecological damage and harm to human health caused by the pipeline and its functions.

The report – prepared by a contractor with ties to TransCanada – said the $7 billion project will not impact the pace of Canadian oil sands development or its contribution to climate change. It also suggested that it would be safer to transport 830,000 barrels per day (bpd) of crude by pipeline than by rail.

People demonstrate against the proposed Keystone XL pipeline near the hotel where US President Barack Obama is to address the Wall Street Journal CEO Council on November 19, 2013 in Washington. (AFP Photo / Nicholas Kamm) 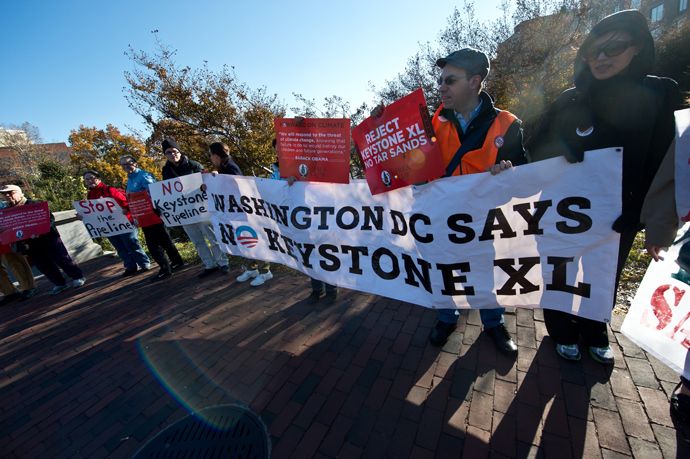 While the State Department took no position on the 1,179-mile pipeline and stopped short of recommending if the northern line should be built, it did claim the pipeline is more environmentally sound than other options. Obama is expected to make a final decision on the pipeline by mid-2014. The southern leg of the pipeline began operations last month.

Much of the resistance to the pipeline centers around increased greenhouse gas emissions connected with crude tar sands development. This requires a more energy-intensive process than the production of plain crude oil since a substance known as bitumen must be extracted from the Alberta tar sands, for instance, through means such as surface mining or injecting steam into the ground.

Opponents of Keystone XL say that, in addition to the carbon-intensive impact that results from the extraction of tar sands that will only worsen the effects of climate change, the pipeline will also put nearby communities at risk of oil spills into water supplies.

Critics have also pointed out that most of the oil that will travel through Keystone XL will go to growing economies overseas - like China - that have an increasing demand for more fossil fuels. The pipeline, detractors say, is unlikely to lower the price of gasoline in the US.

Proponents have said the project will create tens of thousands of jobs for the communities near the pipeline in the US. The State Department predicts the pipeline would create an immediate 5,000 to 6,000 jobs. Others have said long-term job creation, though, is nowhere near either estimate. President Obama said as much last March.

"The most realistic estimates are this might create maybe 2,000 jobs during the construction of the pipeline, which might take a year or two, and then after that we're talking about somewhere between 50 and 100 jobs in an economy of 150 million working people,” he said.

A Canadian City is Ending Homelessness once and for all!
CoVid-19 Update #8: By the Numbers
You`ve Been Warned: Why You Need To Be Ready for Total Grid Failure