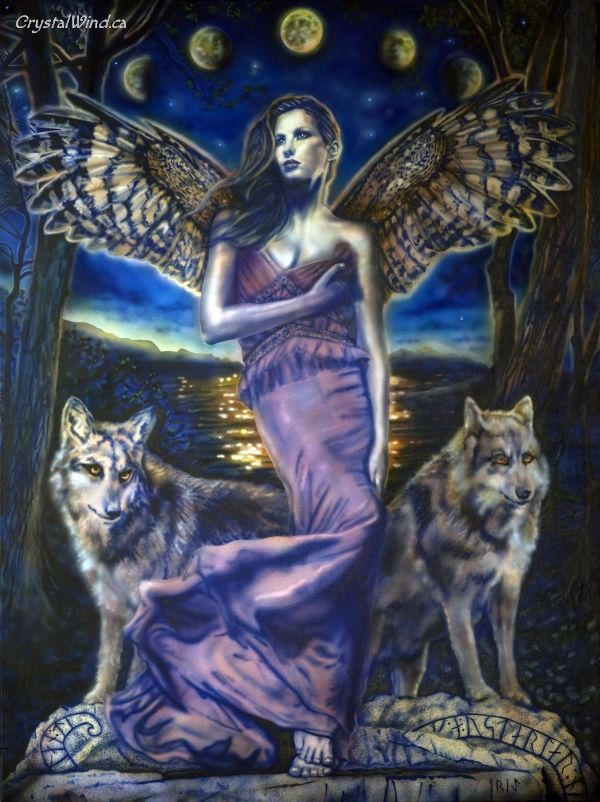 The Yule feasts are over and the busyness of the season has ended. The strings of bright lights have been taken down from the houses and trees. Like snow, the grey season falls upon you - that interlude between Christmas sentiment and spring’s arrival. Your loved ones have scattered, flown back to their nests, as you gaze on the silhouettes of empty branches. The holiday reunions are over, and the silence is as a balm: cooler and sweeter than the sounds of conviviality, that mask a hidden heartache.

The clouds oppress as a blanket of slate. Few distractions exist to keep the loneliness at bay, and so a procession of ghosts, whose number increases every year, passes through the vacant rooms.

The stinging cold directs your thoughts to the Vikings, whose mythology is so unflinching, even their gods must die. You’re no stranger to the grey season. You recognize that solitary howl on a starless night - the piercing cry unanswered. The Wolf has arrived at your door.

In Norse myth, the wolf’s jaws are the swallowing abyss, the fate staring down the transience of all things. The Sky Wolf Hati swallows the Moon. The Great Wolf Fenrir swallows Odin. But what was the first Domino of Doom, setting off this Twilight of the Gods? It was when the Sun was devoured by the Sky Wolf Skoll. It was inevitable. He’d been chasing that big, red ball across the sky since the beginning of time!

Indeed, the sun IS devoured by a prolonged dark season spanning December, January and February.  Recurring seasonal depression was recognized as a syndrome in 1984 as SAD, or Seasonal Affective Disorder. There’s excellent online advice on how to treat SAD, such as raising serotonin levels, light therapy and the benefits of social engagement and counselling.

This article is not to detract from this guidance, nor does it offer advice concerning depression. The following narrative is just an alternate perspective. Rather than outrun, chain or medicate that wolf at the door, what if we were to embrace this beast of mid-winter? Will the Wolf gobble us up, or will It lead us to a sweeping vista that we’d mistaken for the most desolate of places?

She-Wolf: A Transference of Power

Emperor Tiberius of Rome, 1 AD, was the first person known to have used the expression “holding a wolf by its ears.” According to The Free Dictionary, this means, “to be in a difficult situation from which it is as dangerous to extricate oneself as it is to remain in it.” How neatly this describes the conundrum of life, of being forever pitched on the brink of damned if you do or if you don’t - a paradox, such as Skoll, the name of the wolf who ends it all, sounding like the Norse toast for “Cheers.” How wonderful is life, yet no one gets out of here alive!

Returning to the Rome of Tiberius, the She-Wolf Lupa was deified as a civic goddess. We recognize her, immortalized in Etruscan bronze, as “The Capitoline Wolf.” (The bronze infants beneath her were added during the Renaissance.) Lupa stands protectively over the abandoned babes Romulus and Remus, giving them milk. These famous twins were thrown into the Tiber to drown by order of Amulius, to secure the throne he usurped from their grandfather. Romulus and Remus would later co-found Rome. In Lupa’s nourishment is the feral power that drives the creation of an empire. Lupa’s legend upholds the civic virtue of social order, with a sanguine splash of revenge. The She-Wolf ensures that Romulus and Remus will survive, murder Amulius, and reinstate their grandfather on the throne.

What does Lupa have in common with the Norse wolves Hati, Fenrir and Skoll? All four wolves presided at the crossroads of beginnings and endings, participating in a fated transference of power, in spite of actions taken to avoid these events. The Norse didn’t perceive Fenrir, who swallowed Odin, as evil, but as a vehicle of the inescapable. Wolves were also sacred to the Greek goddess Hecate who stands at the crossroads, ruling the boundaries between life, death and the Underworld.

The wolf embodies the economy of nature: the harsh truth of predator and prey, the survival of the fittest, as the old makes way for the new. Returning to Seasonal Affective Disorder, these realities may come to the fore, and are all the more challenging during months without sufficient sunlight. Without the reassurance of holidays, characterized by warmth and mutual appreciation, living can feel like a state of sustained devaluation.

Such times present the opportunity for the wisdom of the Lone Wolf. Consider the grey season, (or any other) as a time of being true to one’s nature, whilst rediscovering what that nature truly is. It’s a season of spiritual minimalism - to ruthlessly disengage from whatever is inauthentic and unnecessary.  It’s a time to hone your intuition and move silently with instinctive agency, to develop independence, resilience, and to determine what’s necessary for your survival. It’s the time to identify and free yourself from traps that wounded and ensnared you. It’s time to answer the call to investigate new and more rewarding places. It’s having the courage to know that you’re enough.

The Lone Wolf venturing outwards brings to mind the Walkabout, an Australian Aboriginal rite of passage. This journey into the wilderness of the Outback is undertaken by youths for approximately half a year. The purpose of the Walkabout is to be tested by nature’s rigours, acquire self-reliance, and to experience spiritual transformation. In the words of Ralph Waldo Emerson, “Do not go where a path may lead. Go instead where there is no path and leave a trail.”

The B*tch is Back!

We’ve mythologized the Lone Wolf as an absolute, but in reality, the wolf’s solitude is temporary.  In many cases, the wolf eventually returns to the family group or pack. The chances for survival are better and the strength of social bonds between wolves are as real as our own.

Eventually the grey season gives ways to warmer hues: the blushes of proffered roses, along with the other intimations of desire. The procreative dance begins anew, and who’s leading “the hounds of love?” Yes, it’s Lupa! February 14th is just one day removed from the Roman rites of Lupercalia – The Festival of Wolves. (Racy details regarding this celebration are in the February article.)

In the Wolf we admire the life force unfettered, the primal origins of leadership, the ebb and flow of isolation and kinship, the seasons of play and ferocity, the maxim of beginnings and endings. Like many social animals, we love our offspring, aware that they exist to replace us. We embrace our demise through what we love most.

Each year, we retreat in the darkness and rejoice as the sun returns. Each year, we experience another reprieve. As we age, our encounters with the Wolf might become more terrifying, or we might hail the Wolf as a lifelong, inevitable companion. As ever, we are pitched on a vast precipice, aware that each moment of life is fleeting, never to be repeated and infinitely precious.