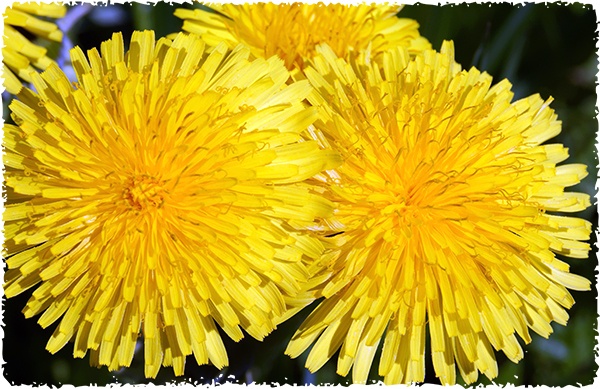 A tea made from the root promotes psychic powers.

This same tea, steaming and placed beside the bed, will call spirits.

Dandelion, buried in the northwest corner of the house, will bring favorable winds.

To send a message to a loved one, blow at the seed head in his or her direction and visualize your message.

Native Americans realized the great value of dandelion and used it as food and medicine. The leaves of this golden-flowered weed are rich in vitamins A, B, C and D, as well as potassium, zinc, iron and calcium.

Native to Europe and Asia, dandelions grow in temperate regions of the world, in lawns, on roadsides, on disturbed banks and shores of water ways, and other areas with moist soils. They were introduced into the Midwest from Europe to provide food for the imported honeybees in early spring. They now grow virtually worldwide. 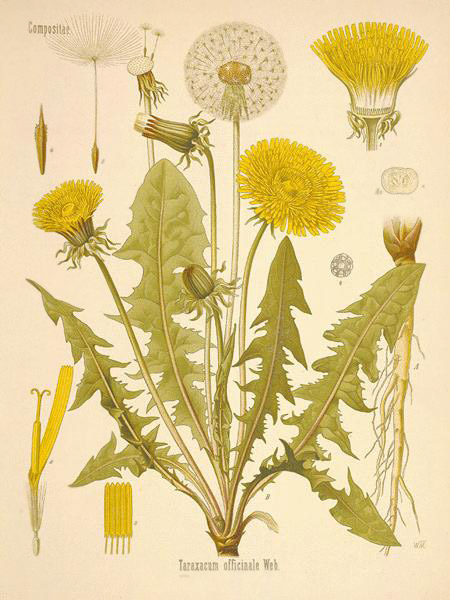 Description: Dandelion is a small perennial with a stout taproot, and toothed leaves up to 30 cm long that form a tight rosette. Smooth leaves are bright green with uneven, jagged margins of backward pointing teeth, and for this reason the plant has been given the name dandelion which comes from the French ‘dent de lion’, meaning lion’s tooth. Yellow, solitary flowers arise from the centre of the rosette and develop into spherical, "seed" heads with fluffy parachutes to carry each seed away in the wind, nature’s way of plant preservation. All parts of the plant exude a slightly bitter, milky substance.

Harvesting: Pick young, fresh leaves and flowers any time; collect leaves to dry when in flower. Dig roots in second autumn. Use fresh, or dry. The roots are generally dried whole, but the largest ones may sometimes be cut transversely into pieces 3 to 6 inches long. Collected wild roots are, however, seldom large enough to necessitate cutting. Drying will probably take about a fortnight. When finished, the roots should be hard and brittle enough to snap, and the inside of the roots white, not grey

The roots should be kept in a dry place after drying, to avoid mould, preferably in tins to prevent the attacks of moths and beetles. Dried Dandelion is exceedingly liable to the attacks of maggots and should not be kept beyond one season.

Culinary Uses: Make dandelion wine from (unsprayed) dandelion flowers. Dandelion roots are roasted and used as a substitute for coffee. The young greens are more nutritious than spinach and are eaten fresh in salads. Mince the flowers and use as a garnish or to add color to spreads and butters.

Constituents: The chief constituents of Dandelion root are Taraxacin, acrystalline, bitter substance, of which the yield varies in roots collected at different seasons, and Taraxacerin, an acrid resin, with Inulin (a sort of sugar which replaces starch in many of the Dandelion family, Compositae), gluten, gum and potash. The root contains no starch, but early in the year contains much uncrystallizable sugar and laevulin, which differs from Inulin in being soluble in cold water. This diminishes in quantity during the summer and becomes Inulin in the autumn. The root may contain as much as 24 per cent. In the fresh root, the Inulin is present in the cell-sap, but in the dry root it occurs as an amorphodus, transparent solid, which is only slightly soluble in cold water, but soluble in hot water.

Medicinal Uses: Dandelion is a powerful diuretic, and rather than deplete the body of potassium (which helps control fluid balance), it replaces it. It is specific for cases of congestive jaundice. It can be used to treat inflammation of the liver and gallbladder. Dandelion root encourages the liver and gall bladder to eliminate waste, and then stimulates the kidneys to expel it via the urine. Use dandelion as part of a treatment regime for muscular rheumatism.

In the hepatic complaints of persons long resident in warm climates, Dandelion is said to afford very marked relief. A broth of Dandelion roots, sliced and stewed in boiling water with some leaves of Sorrel and the yolk of an egg, taken daily for some months, has been known to cure seemingly intractable cases of chronic liver congestion.

A strong decoction is found serviceable in stone and gravel: the decoction may be made by boiling 1 pint of the sliced root in 20 parts of water for 15 minutes, straining this when cold and sweetening with brown sugar or honey. A small teacupful may be taken once or twice a day.

Dandelion is used as a bitter tonic in atonic dyspepsia, and as a mild laxative in habitual constipation. When the stomach is irritated and where active treatment would be injurious, the decoction or extract of Dandelion administered three or four times a day, will often prove a valuable remedy. It has a good effect in increasing the appetite and promoting digestion.

Dandelion combined with other active remedies has been used in cases of dropsy and for induration of the liver, and also for pulmonary tuberculosis and some cutaneous diseases. A decoction of 2 oz. of the herb or root in 1 quart of water, boiled down to a pint, is taken in doses of one wineglassful every three hours for scurvy, scrofula, eczema and all eruptions on the surface of the body.

Dandelion Tea Infuse 1 oz. of Dandelion in a pint of boiling water for 10 minutes; decant, sweeten with honey, and drink several glasses in the course of the day. The use of this tea is efficacious in bilious affections, and is also much approved of in the treatment of dropsy.

Or take 2 oz. of freshly-sliced Dandelion root, and boil in 2 pints of water until it comes to 1 pint; then add 1 oz. of compound tincture of Horseradish. Dose, from 2 to 4 oz. Use in a sluggish state of the liver.

Or 1 oz. Dandelion root, 1 oz. Black Horehound herb, 1/2 oz. Sweet Flag root, 1/4 oz. Mountain Flax. Simmer the whole in 3 pints of water down to 1 1/2 pint, strain and take a wineglassful after meals for biliousness and dizziness.

For a young child suffering from jaundice: 1 oz. Dandelion root, 1/2 oz. Ginger root, 1/2 oz. Caraway seed, 1/2 oz. Cinnamon bark, 1/4 oz. Senna leaves. Gently boil in 3 pints of water down to 1 1/2 pint, strain, dissolve 1/2 lb. sugar in hot liquid, bring to a boil again, skim all impurities that come to the surface when clear, put on one side to cool, and give frequently in teaspoonful doses.

A Medicine for Piles 1 oz. Long-leaved Plantain, 1 oz. Dandelion root, 1/2 oz. Polypody root, 1 oz. Shepherd's Purse. Add 3 pints of water, boil down to half the quantity, strain, and add 1 oz. of tincture of Rhubarb. Dose, a wineglassful three times a day. Celandine ointment to be applied at same time.

To flush accumulated waste from the liver and gall bladder, take 1 - 2 teaspoons dandelion tincture up to three times daily, as needed.

Darwin would be proud ... As is obvious from its global colonization; the plant is both tough and adaptable. It grows in a funnel shape so that any falling water rolls right down to the plant’s center, towards the root, where it is needed. The dandelion’s parachute-like seeds blown from the plant in every direction are another adaptation that makes it impossible to eradicate. One white seed head hit with a gust of wind can start 200 or more new plants ...

"It's a human invention to help us reproduce," another dandelion replied.

Thank you!
ॐ Namasté - Blessings!
"Life is an echo, what you send out comes back."
© 2008-2022 crystalwind.ca. All rights reserved.
To Walk The Red Road
Walking the Red Road
Dragonfly Medicine

We have 900 guests and no members online