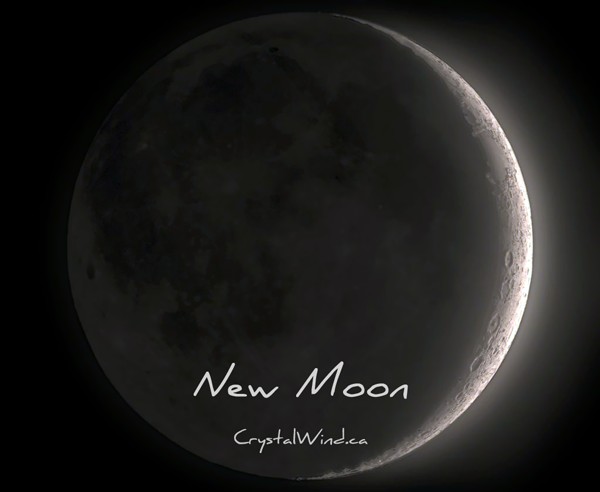 Fresh, unfamiliar horizons are emerging with the Aquarius New Moon. It’s the first one of the year and comes with a clarifying and propulsive force that loosens logjams, disrupts holding patterns, and signals that a new year has begun, at last.

As happens with every new year, this New Moon inspires thinking about what we will change this time around. But unlike most new years, this Moon actually triggers change. And it cracks open a door onto terrain we will soon be exploring, for the next couple of decades.

The focus is how we pull off maintaining individuality within a group context. Each side of that equation is markedly different than it has been. The last few years have shaken many a long-time friendship and community, and rerouted the paths of people who assumed they’d be connected for the rest of their lives. No surprise, what this Moon is seeding is markedly different as well.

It’s the third of four consecutive new moons at 1 degree of their signs, underscoring the raw, unfiltered newness of what is launching and unfolding. Step into the new; embrace it; use it to reshape yourself and sharpen your vision of the future. May as well; a process outside conscious control is at work, with the New Moon’s out-of-sign conjunction to transformative Pluto. That teaming is renovating your support system and relationship to technology, cutting out dead or diseased parts, and stripping down your sense of self as well. The process is freeing up energy and making dramatic movement possible.

It’s as if a machete is cutting through one of several ropes holding a hot air balloon in place, and the balloon is floating up and pulling against the ropes that remain. The New Moon moves us from immersion in our current circumstances to a glimpse of the unfamiliar world that’s emerging over the next couple of years. We’ll take a first step into it from late March to mid-June, when Pluto briefly visits Aquarius, and then enter it fully late in 2024.

This New Moon is part of the orientation process. What you’re focusing on now has a bearing on what’s coming. While larger forces are undeniably at work for all of us, do not pass up the opportunity to articulate goals and intentions for what you can affect. You are participating in setting up the next couple of decades of your life.

Got any baggage you’d like to leave behind before exploring new horizons? Dropping it may be natural. Also, advisable. And possibly unavoidable. The catalyst is not merely the powerful Moon/Pluto contact. The New Moon is receiving pressure from her nodes, in a wide but dynamic T-square. The stress injects issues of values and resources into the New Moon equation and pits those of the past against the ones that fit the future. What are yours? What’s going on in the circles and communities around you? Renewed awareness of that will take you out of situations that don’t feel right any longer. Use that awareness to affect what you put your mind to now.

So: You come into this Moon’s potential more focused, more empowered, more truly you. The circles you travel in are more focused, more empowering, more fitting for you. The same is true of the future you are envisioning. From that base, the skies are encouraging you to be daring and ask for more, expect more, indulge in more, allow yourself to have more. The prospect is exhilarating, fueled by a sextile from Jupiter to the New Moon. With Juno exactly conjunct Jupiter, partnerships and agreements play into the excitement. Some might support a bold new vision, while others might be targets for updating and improving.

No need to spin your wheels contemplating any of this. You will simply act on a moment’s notice, assuming you have any at all. This Moon has an electric charge that says, “Get going already!” Uranus, the modern ruler of Aquarius and the quick-change artist of the sky, is ending its five month retrograde and stationing direct. With Uranus’ course change locking in within a day of the Moon it rules, the effect is awakening, catalyzing, and propelling, unleashing lightning that disrupts the old and illuminates the terrain ahead. The importance of some of what you see will make more sense in May, because Uranus is stationing on the degree where the Scorpio Full Moon lunar eclipse will take place then.

It’s not all plot twists, surprises, and sudden change, although those will be abundant. Some epiphanies and impulses to shake things up stabilize alliances – firming up what you do want, while confirming the departure of others. Values, integrity, maturity, and community spirit are factors. Venus, ruler of love, money, and creativity is conjunct Saturn, Aquarius’ traditional ruler and the planet of structure and commitment.

It’s unlikely this spells romance, with the friend zone of the zodiac serving as venue for the meeting of the social director of the skies and the planet of adulting. Instead, see if you aren’t feeling more secure and comfortable and long haul about your chosen communities (and your place in them), as well as about your vision for your future. Cessation of hostilities is possible, or standing up together against outer threats, with the Venus/Saturn conjunction in a sextile to Eris, goddess of discord. Commitment and stability come with a streak of compassion and forgiveness, and moving away from fantasy and illusion, prodded by the discomfort of that conjunction’s semi-sextile to Neptune.

A lot’s going on. Harness Aquarius’ trademark objectivity and take a 30,000-foot elevation view of life. What do you see? What do you spy shimmering in the distance? What shape would you like that to take? What kind of companions do you want with you? Focus and set your intention. And keep a loose hold on them.

Re-blogged on crystalwind.ca with written permission from Kathy Biehl.

I am a professional astrologer, psychic and Tarot adviser who helps individuals and business owners make decisions and better understand (and laugh about!) themselves, their options and the people in their lives. I have pursued astrology since junior high, read the Tarot since high school and studied formally at the Houston Institute of Astrology and in workshops with leading astrologers across the country.

I am a tested and verified member of Best American Psychics, which gave me its 2018 Awesome Accolades Award! (Plus, Psychic of the Month for January 2020 and December 2013 and Psychic of the Week for February 14, 2022, January 25, 2021, December 2, 2019, and June 18, 2018.) I am also a tested and certified member of the Certified Psychics Society and trained in mediumship at the Institute for Spiritual Development. In addition to teaching Tarot, astrology, empathic energy management and related metaphysical topics, I teach, design, lead and produce guided meditations for relaxation and personal growth.

I bring to my counseling my diverse life experience as an attorney, a small business owner, a performing artist and a writer.