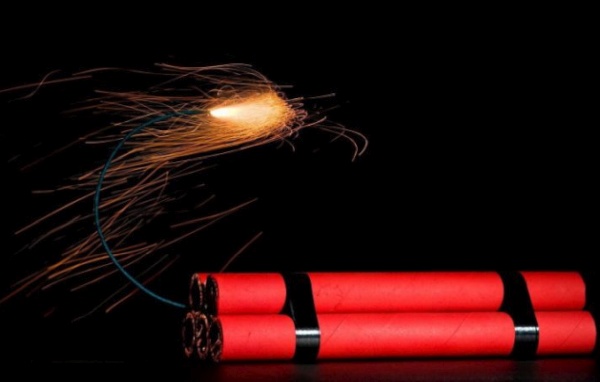 The Leo full moon on Thursday, January 28, 2021, is square Mars and opposite Jupiter. So the spiritual meaning of the full moon January 2021 astrology relates to anger management and using self-control to harness your initiative and enthusiasm.

The January 2021 full moon joins an aggressive Mars-like fixed star. It makes only testing square and opposition planetary aspects that act like Mars. And Jupiter amplifies the challenging nature of Mars. So it is very important to use patience, responsibility, and self-control to avoid anger and impulsiveness causing harm to yourself and others.

The January 28 full moon at 09°05′ Leo makes only testing red planetary aspects as shown in the chart below. So as well as being a challenging and tense full moon, the lack of harmonious blue aspects means it will be extremely difficult to relax.

Red aspects resemble Mars in their influence. They promote action, achievement, and the attaining of goals. Mars is also the apex of a T-square aspect pattern involving the full moon. All the energy stored in the oppositions is transferred along the squares discharged through Mars.

The Moon is also conjunct a fixed star that acts like Mars, giving courage, aggression, defiance, and violence. 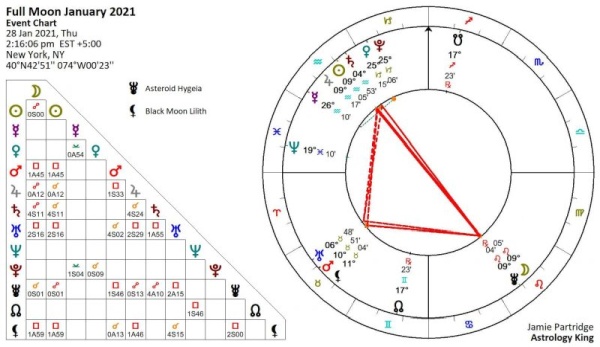 Full Moon square Mars (1°45′) gives an insatiable need to meet your passionate desires. But dynamism and a fighting spirit can make you short-tempered. A subconscious urge to act impulsively brings danger from risk-taking. Extra care is required to avoid being hurt or causing harm.

However, holding onto anger is not wise. Try to release your heated feelings in a controlled way. Avoid being overly defensive or mean when others share their hurt feelings. But this is not easy, so some degree of emotional discomfort is to be expected, especially in intimate relationships.

Courage is needed to face whatever is causing you pain or making you feel threatened. Temper tantrums, accidents, violence, cuts, or burns, would be signs of not dealing with your emotional troubles.

Full Moon opposite Jupiter (0°12′) can make you feel happy, relaxed, sociable, and generous. But it can also bring overconfidence, lack of self-control, and immorality. The square to Mars means these less desirable effects will predominate.

Being more willing to share your feelings and less guarded about your privacy could bring embarrassment and scandal. Generosity and kindness may be seen as a weakness and be taken advantage of. Emotional discomfort, poor self-image, a questioning of beliefs, jealousy, and obsessive, excessive, or addictive behaviors are possible.

Mars square Jupiter (1°33′) gives the enthusiasm, courage, and initiative to start new projects and to take the risks needed to achieve large-scale success. This is very sexual and attractive energy though a little coarse or tactless. It can also make you overconfident, impulsive, and reckless.

Avoid acting rashly without considering the consequences of your daring actions. Choose your fights carefully and use forethought and strategy. Taking too many risks could lead to accidents and injuries, and being too forward could lead to embarrassment. A balance between caution and bravado needs to be found.

Venus conjunct Pluto (0°09′) dramatically increases your need for love and affection. It gives an intense desire to experience companionship at a deeper level. Magnetic attractiveness gives the power to attract friends and lovers. But this power can also be misused by manipulating, guilt-tripping, or other subversive tactics.

Instant attraction and infatuation could lead to intense sexual experiences and karmic relationships. But possessiveness, obsessions, stalking, and jealousy are also possible. If married, an affair at this time would have serious repercussions. There may also be a tendency to fall for negative or dangerous types of people like criminals and heavy drug users.

Saturn square Uranus (1°55′) is a long-term influence that climaxes on February 17. It can bring changes you don’t want. It also makes it harder to make the kind of changes you do want. Your personal freedoms and rights may be restricted. This can be a very frustrating time of rising tension and sudden, expected changes.

But if you stay open-minded, patient, and flexible, challenges can be turned into opportunities to rid yourself of negative, restrictive, and limiting things in your life. It is best not to force change that you want but to adapt to changing conditions. A well-considered, methodical, patient, and step by step approach is best.

Full Moon conjunct asteroid Hygeia (0°01′) makes health, hygiene, and disease major themes of the full moon January 2021 astrology.  The Coronavirus pandemic will likely cause increased illness and death, as well as hypochondria, fears and conspiracy theories and vaccination, and the virus itself.

With the full moon also square Mars and opposite Jupiter, there is an increased risk that lack of caution, increased socializing and risk-taking will lead to a spike in infections in the coming weeks.

Given the other full moon aspects, promiscuity and lack of caution may cause an increased risk of infection from Covid-19 and sexually transmitted diseases, as well as problems with triangular relationships.

Full Moon January 2021 in the Sign of Leo is actually in the Constellation of Cancer. This discrepancy is due to the precession of the equinoxes which has moved the Sun Signs almost a whole Sign out of alignment with the Constellations from which they were named over 2000 years ago. 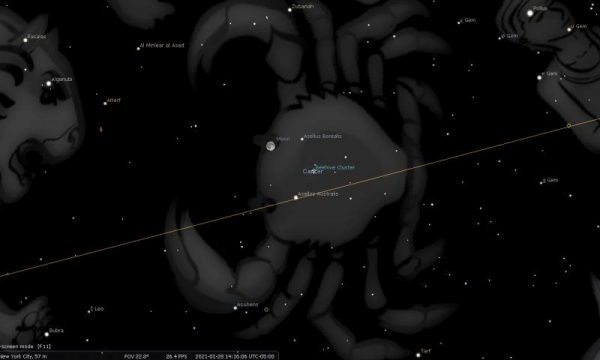 The 23rd Chinese lunar mansion (Ghost) from 06°00′ to 10°33 Leo governs departed spirits, souls of missing persons, cemeteries, places where people were killed, and buried treasures. Making an enclosure will presage the death of a little girl. Unfavorable for beginning new projects, marriage, and anything new. But good for the capitalization of property, memorial services, and visiting graves.

Fixed star Asellus Australis at 09°01′ Leo on the Shell of Crab is of the nature of Mars and the Sun. It gives courage, aggression, and makes its natives heroic and defiant leaders, the danger of violent death, eye injuries, serious accidents, and burns. Yet it also gives beneficence, patience, care, and responsibility, with a charitable and fostering nature. [1]

These people have an aggressive nature, and will not take insults easily. They may, by their own lack of caution or by being dare-devils, put their lives in danger, and will not hesitate to use brutal and violent means. But if a person is able to sublimate the Mars energy, an extraordinary output of achievement is possible. Called “the spirit of the ancestors” by the Chinese.[2]

The ‘patient donkey’ is a lovable creature, but it can be very self-willed and uncooperative indeed at times of its own choosing. It displays moodiness and can put up a wonderful display of stubbornness and impatience at one and the same time. (Asellus Australis is Latin for The Southern Donkey Colt.) [3]

Peculiar experiences with the realms of the dead. The same can be said for spiritual seances. [2]

A deeper intuition that will often reveal the poet, painter, musician unusually gifted, composer, psychic ‘medium’ or astrologer. In all cases too, there is that patience for which the Donkey is respected, a quality necessary for all really reliable psychism. Perhaps when the donkey is being stubborn, he is seeing something in the path which his impatient master cannot, or will not see. [3]

There is the danger of impulsive actions leading to hurt feelings, embarrassments, accidents, and injury. Other influences in the full moon January 2021 astrology create an intense need for companionship mixed with powerful sexual urges and a lack of caution. This increases the risk of infection from Covid-19 as well as sexually transmitted diseases and complications caused by triangular relationships.

But there is the potential for the primal energy of Mars to be harnessed using self-control, patience, responsibility, and a stronger than usual intuition. Great achievements and successes are possible. A profound new love relationship may begin or you may enjoy deeper love with a partner.

This is a particularly good moon phase for identifying obstacles in your path and for ridding yourself of things that are bad for you or you no longer need.

The effects of the January 28 full moon lasts for two weeks up to the February 11 new moon. Its influence is combined with that of the January 13 new moon. Conjunct Pluto, it triggered soul growth and evolution in response to a crisis. It brought tension and frustration due to a deep-seated problem that will take time and effort to adapt to.

We have 1605 guests and no members online