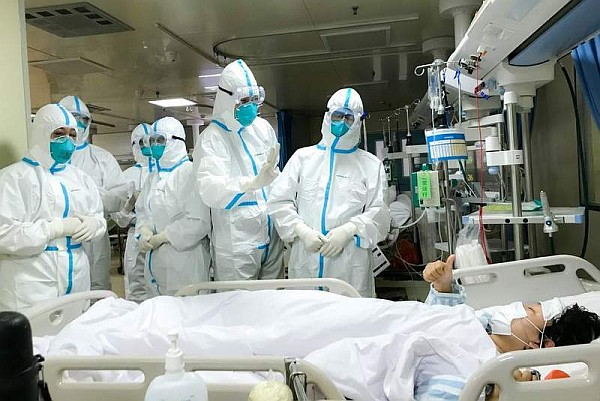 The March 2020 new moon signals a time of fear, inhibition, and restraint. This is only to be expected given the unprecedented restrictions and panic resulting from the coronavirus pandemic.

Above all else, Chiron is a healer. With wisdom and unconditional love, he teaches how to heal yourself and others with compassion and empathy.

The March 24 new moon at 04°12′ Aries makes just one major planetary aspect. But with an orb of over 4 degrees, the new moon sextile Saturn is only a mild influence but it is a positive one.

A stronger influence comes from Chiron, Lilith, and the lunar nodes. These three are not used in traditional astrology but the lunar nodes are important in Vedic, or Indian astrology. They are associated with family, past lives and karma. Chiron is being used more and more by modern astrologers and is associated with deep karmic wounds but also healing and magic. Lilith (Black Moon Lilith) is the Dark Goddess archetype and like a feminine version of Chiron.

Another important influence on the new moon March 2020 astrology is a fixed star called Deneb Kaitos. This star acts like Saturn on a bad day, causing misfortune, inhibition, and restraint. There is also an asteroid on the new moon degree which reinforces the karmic wounding theme. 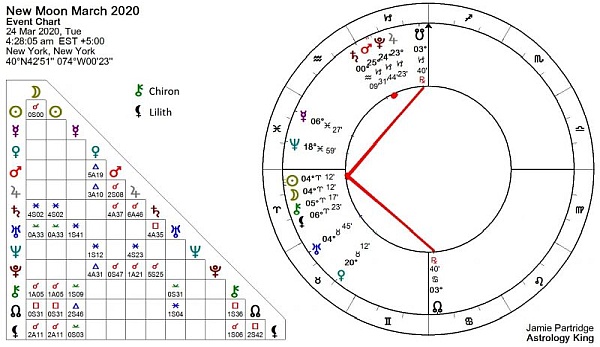 New moon sextile Saturn give the patience and perseverance to struggle on through these very hard times. It gives a serious and responsible attitude and makes you focus on practical matters. This is a good new moon to complete serious or difficult tasks, to ask for advice from professionals and elders and to share your wisdom with younger people.

Chiron represents wounding and healing. It is a deep wound in your soul and also the ability to heal yourself and others. The new moon conjunct Chiron exposes your most painful wounds, physical and emotional. You will feel pain from the wounds you have suffered but also guilt from the pain you have inflicted on others. Chiron may also manifest a new wound through illness, accident, or loss.

Increased awareness of these wounds can make you more sensitive to the pain. You may even become scared to express yourself but it important that you do not keep the pain buried inside. Increased empathy and understanding means the wounds of your loved ones will also become more apparent and affect you more deeply.

Childhood wounds associated with your parents may resurface. Grief, fear, rejection, alienation or victimization are possible. You may feel that you are damaged or that fate has been particularly cruel to you. This could lead to a loss of confidence, depression, and self-pity.

On the other hand, you may react more aggressively to your pain and start hurting yourself and others. But new moon March 2020 is a time for nurturing and healing. Chiron heals through medicine, astrology, Tarot, and your hands and words. In its highest manifestation, Chiron heals through thoughts alone.

This new moon could see the start of some special relationships between people who feel they are not accepted by mainstream society. You could find comfort in the arms of a fellow outcast like the following examples:

New moon square the Nodes of the Moons represents a karmic crossroads. Feeling torn between your past and your future, you may feel confused about your future and hesitant to go forward.

A tendency to become stuck in negative emotional patterns may lead to relationship tension, periods of self-imposed isolation and worry about the future. You may also experience anxiety, guilt, and fear as you confront deeply buried memories, and your own bad habits and prejudices.

Leaving your past behind means you may have to make sacrifices and let something go, and that may well cause some pain. But a new moon means it is time for a new start. Difficult choices about family, friends and other things you are emotionally attached to have to be made.

Relationships, beliefs, and behaviors that are good for you will remain. It is only those things that are holding you back from fulling your destiny that you need to let go of. Some people will resist your efforts while others will be more supportive. It will become obvious who is trying to hold you back.

Although you may seek advice, you really have to look inside to know which way to turn. So follow your intuition while remaining responsive to other people. During this four-week moon phase, you will learn many truths that propel you forward on a new path. New karmic relationships may form and these people will also help you find the right path for your soul.

New Moon March 2020 is in Aries Sign but is actually situated in Pisces Constellation. This is because the Constellations have moved about 30° out of alignment with the Signs since they were invented over 2000 years ago. See Precession of the Equinoxes for more detail.

The March 24 new moon is not actually within orb of any major fixed star in the Fishes. However, it is aligned with a big star in the Tail of the Whale or Sea Monster, called Deneb Kaitos. It is labeled in the star map below with its other name, Difda. 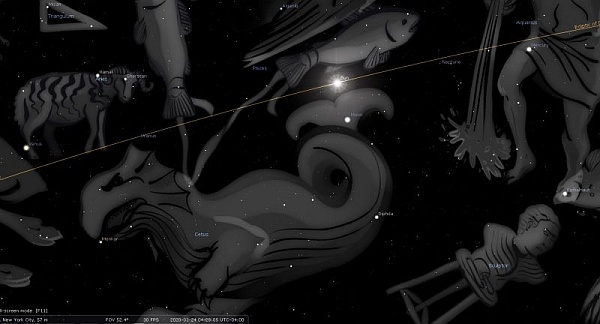 Fixed star Deneb Kaitos causes self-destruction by brute force, sickness, disgrace, misfortune, and compulsory change. [1] Associated with it are inhibitions and restraint in every way, psychologically and physically. [1]

Asteroid 120347 Salacia at 04°20′ Aries is conjunct the March 24 new moon. It is actually a Trans Neptunian Object (TNO) named after the Roman Goddess of the sea and wife of Neptune. She is identified with the Greek goddess Amphitrite, consort of Poseidon.

Karmic astrologer Zsuzsanna Griga says that Salacia represents hiding, emotional depth, commitment, or the lack of it, Atlantean karma, and “dolphin” lives. “I am hiding where you won’t find me”. In general, Trans-Neptunians describe karmic wounds as well as the knowledge and insight that can be derived from wounding experiences. [3]

Salacia may be interpreted as the feminine side of Neptune, which is able to hide even from himself — a very Neptunian concept. Something similar occurs in the human psyche: we often hide our darkest aspects from ourselves and don’t allow them to the surface; otherwise, we couldn’t act out our bright and sunny personality traits too convincingly for others… Darkness and depth are the prerequisites of the Goddess in her full powers. The keepers of the new masculine paradigm tried to demonize everything that symbolized the primordial feminine because they hoped to stabilize their own value system. In a way, this shift also occurs in the story: Salacia is allowed to leave the territory of darkness and may “rise” to the glittering surface. [4]

Find Asteroid Salacia in Your Chart

This is a challenging new moon that seems appropriate given the dramatic circumstances of the coronavius pandemic. The fixed star conjunct the new moon is associated with sickness, misfortune, compulsory change, inhibitions and restraint.

Chiron with new moon March 2020 represents pain and suffering due to the pandemic as well as the deep wounds in your soul that will resurface. Lilith, the lunar nodes and asteroid Salacia reinforce the new moon theme of karmic wounding but also the healing of Chiron.

All the influences paint the same picture. Sickness, loss, and grief are to be expected. So this is a new moon for protecting, nurturing and healing, of yourself and your loved ones. The March 24 new moon last four weeks up to the April 22 new moon.

We have 1088 guests and no members online