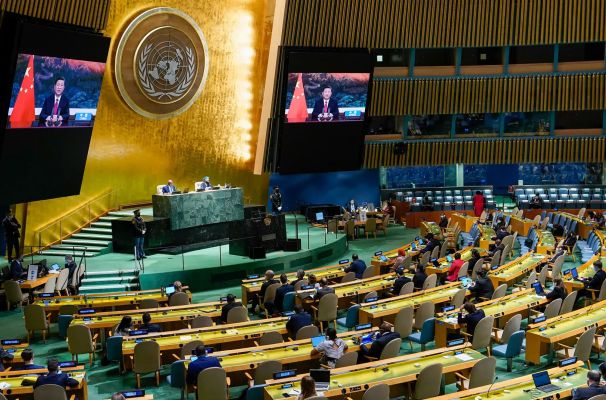 The New Moon in Sagittarius on November 23, 2022, is favorably influenced by Jupiter. So the meaning of the New Moon November 2022 astrology is goodwill and personal, material and spiritual growth.

Mercury and Venus are in alignment close to the New Moon. This adds friendship and diplomacy. However, the New Moon, Mercury-Venus, and Jupiter are all impaired by challenging fixed stars that bring immorality, violence and misfortune.

The New Moon on Wednesday, November 23, 2022, at 01°37′ Sagittarius is aspected by three planets. Mercury and Venus, 8° away, are conjunct the New Moon, while Jupiter is trine. All of these are positive and harmonious aspects. But it’s not that simple; it rarely is.

Jupiter stations direct just five minutes after the New Moon. The red “S″ symbol next to Jupiter in the chart below indicates that Jupiter is stationary but still technically retrograde (it turns black after the exact station). There are also challenging fixed stars involved. 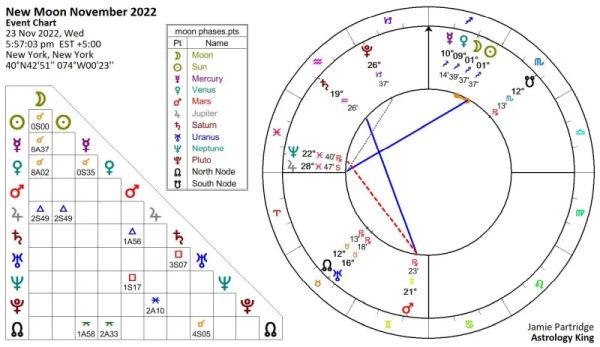 Sun conjunct Moon represents the end of one cycle and the beginning of another new 28-day cycle. It gives a refreshing burst of energy and initiative. But it also brings emotional balance, not irrationally emotional, and not too cold and calculating.

So the New Moon in Sagittarius 2022 is excellent for making a fresh start, turning over a new leaf, or starting a new project. You can also question old habits, behaviors, and beliefs as you search for new and inventive ways to progress.

You could increase your wealth through investments, business deals, or self-employment. Personal growth can also come through religion, spirituality, and group activities. Involvement in politics, philosophy, social welfare, and moral, legal or ethical issues could broaden your mind and bting satisfaction and fulfillment.

However, Jupiter is retrograde, so your growth, happiness, and success are at risk from complacency, ignorance, greed and excess. The risk is heightened because Jupiter is stationary. The closer to the exact station, the higher the risk. The New Moon, only five minutes before the direct station, is very close! Jupiter also aligns with the fixed star Scheat, which causes “extreme misfortune.”

Additionally, the New Moon aligns with a star that causes an immoral, shameless, wasteful and easily seduced nature. These are the same things associated with Jupiter stationing direct. The Jupiter-natured trine aspect between them is associated with abundance, or in this case, possibly over-abundance.

So an otherwise fortunate aspect could result in immorality, laziness, greed, selfishness, arrogance, boastfulness, self-righteousness and overzealousness. It is, therefore, essential to use moderation and self-discipline, especially if you already have problems with excess, overindulgence, gambling or addiction.

Jupiter stationing direct trine the November 23 New Moon will likely affect inflation, a significant threat to economic growth. It will hopefully mean a peak and turning point during this moon phase, but there is a chance it could exacerbate the problem.

Mercury conjunct Venus is a positive influence on the New Moon November 2022 astrology. It encourages personal interaction and makes communications more harmonious and pleasant. It helps you share your love and affection, which is ideal for socializing, making friends and dating. This conjunction also enhances your artistic and creative skills.

Mercury with Venus brings people together and encourages cooperation. It gives diplomatic and negotiating skills to resolve conflicts, find peaceful settlements to disputes, and break down barriers to progress. Doing business is also favored because of a good head for numbers and the ability to find win-win situations.

The New Moon in November 2022 is in the Sign of Sagittarius. But as the star map below shows, it borders the Constellations of Libra and Scorpio. This discrepancy is due to the precession of the equinoxes.

Over the last 2000 years, the Constellations have moved nearly 30° out of alignment with the Signs. The Zodiac was invented only as a measuring device (see the ecliptic line below). Astrologers had always used the visible constellation and their stars for interpretation. 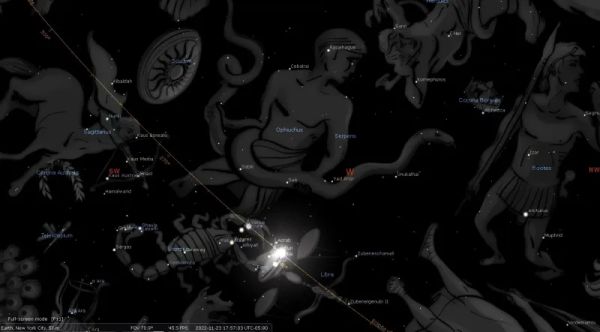 The closest stars to the November 23 New Moon are in the northern Constellation Hercules. But the closest major fixed star is Yed Prior in the left hand of the Serpent Bearer, Constellation Ophiuchus.

Heart of the Scorpion

The most significant stellar influence on the New Moon November 2022 astrology is from Alpha Scorpii in the Heart of the Scorpion. As the image above shows, both Mercury and Venus closely align with Antares, the Rival of Mars.

Fixed star Antares causes malevolence, destructiveness, liberality, broad-mindedness, evil presages, and danger of fatality and makes its natives rash, ravenous, headstrong and destructive to themselves by their obstinacy. [1]

Antares makes people tough, belligerent and pugnacious. This is an important star for military personnel. It conveys mental alertness, strategic ability and courage to make daredevils. Antares is a violent star, signifying a violent death, either in battle or by the process of law. On the other hand, danger may come about by fire, weapons or machinery. [2]

With Mercury: Suspicious, wrongfully accuses friends, unpopular, uses ecclesiastic influence in business, money obtained slowly and with much difficulty, the danger of sickness to the native and his family, and death of a relative at home or away. [1]

With Venus: Insincere, dishonest, energetic and able but selfish. [1]

The November 27 New Moon in Sagittarius is well-aspected. The goodwill created by Jupiter and the friendliness from Mercury with Venus should encourage people to come together to resolve problems and make the world a better place.

The New Moon in November 2022 astrology is a good omen for international relations and world trade. But Jupiter stationing direct and fixed star Antares could put amplify problems and reduce cooperation. Or they could simply reflect the nature of the challenges we face at the moment, like inflation (Jupiter) and war (Antares).

So there could be trade agreements and treaties or trade sanctions and diplomatic crises, military attacks and war or retreats and peace. There could also be more developments with the Nord Stream gas pipeline and the reporting of political scandals.

If the New Moon November 2022 astrology directly affects your Sign, you can read about it in your free Monthly Horoscope. Finally, see Sun Transits for more details about how it affects your natal chart.

We have 1223 guests and no members online