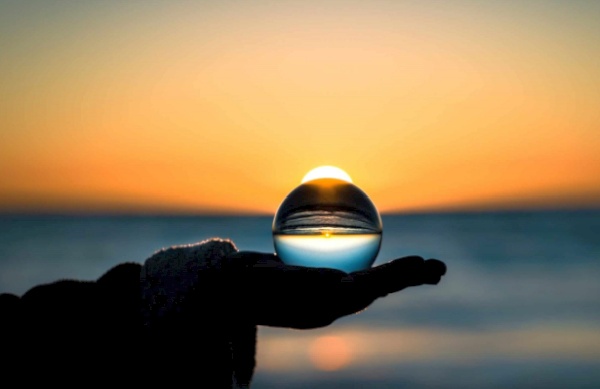 The Virgo new moon on September 6, 2021 makes a harmonious aspect to Uranus. So the spiritual meaning of the new moon September 2021 astrology is positive change, excitement, self-awareness and psychic ability.

The September 2021 new moon also joins a star and an asteroid that both relate to prophetic ability. So this really is an excellent new moon for trusting your intuition to take advantage of rapidly changing conditions. 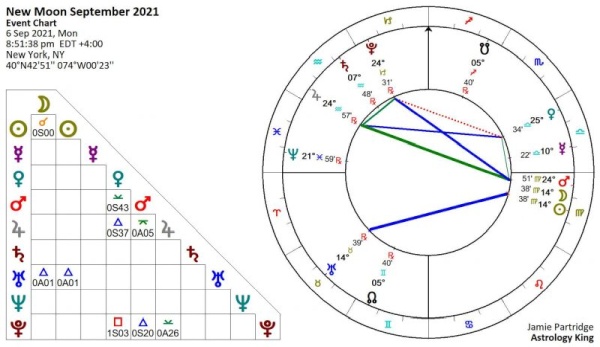 New moon trine Uranus is an extremely powerful influence with an orb of just 0°01′. It brings rapid but positive change, freedom and excitement. You will feel like trying sometime new, outside of your normal routine. This could range from new adventures to new inventions. So this is an excellent moon phase to leave your comfort zone and widen your social circle. You are more likely to meet unorthodox types of people from different cultural or ethnic backgrounds than your own.

But even more importantly, given some other factors mentioned later, this harmonious aspect to Uranus enhances your intuition and brings flashes of insight. This can lead to self-discovery, self-awareness, and creative breakthroughs. It also gives the ability to anticipate the future and take advantage of that by quickly adapting to changing conditions.

Psychic awareness combined with increased self-confidence allows you to express the more unique or quirky side of your personality. Your keen perceptive skills mean that you can better understand studies of science or the occult like astrology. This is also a good new moon to promote humanitarian and progressive causes and to stand up for the underdog.

New Moon September 2021 is in the Sign of Virgo. But as the star map below shows, it is in the Constellation of Leo. This discrepancy is due to the precession of the equinoxes. It has moved the Sun Signs almost a whole Sign out of alignment with the Constellations from which they were named over 2000 years ago. 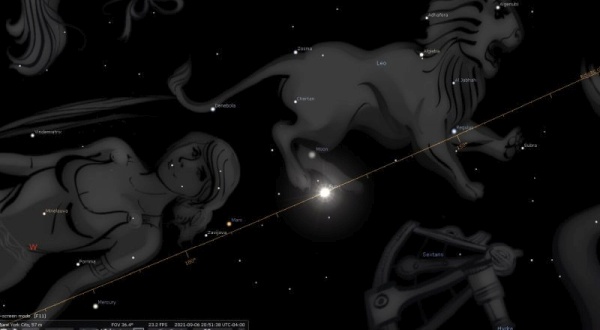 The closest star to the new moon is Theta Leonis, named Chertan in the image above, but called Coxa by astrologers.

Fixed star Coxa gives the ability to prophesy. On the Euphrates, Coxa and Zosma, were Kakkab Kua, the constellation of the god Kua, the Oracle. [1]

Fixed star Porrima gives prophetic instincts. [2] The Latins called this Porrima, or Antevorta, sometimes Postvorta, names of two ancient goddesses of prophecy, sisters, and assistants of Carmenta or Carmentis, worshiped and at times invoked by their women. [1]

Asteroid 13, Egeria is named after the goddess Egeria, divine consort and counselor of the second king of Rome, Numa Pompilius. Egeria was the giver of laws and rituals, and her name is an eponym for a female advisor or counselor. She gave wisdom and prophecy in return for libations of water or milk at her sacred groves. [3]

Find Asteroid Egeria in Your Chart

The September 6 new moon almost exactly trine Uranus brings progressive and exciting change that happens quickly, without causing too much chaos. Heightened intuition and the ability to foresee the future means you can take advantage of the radical changes occurring.

The influence of the September new moon lasts for four weeks up to the October 6 new moon. The best time for starting new projects is during the waxing phase of the moon, from September 6 up to the September 20 full moon.

If the new moon September 2021 astrology directly affects your Sign you can read about it in your free Monthly Horoscope. Finally, for more details about how it affects your natal chart see Sun Transits.

We have 1396 guests and no members online