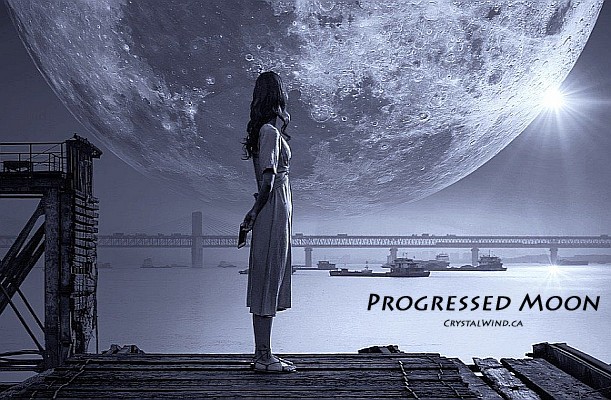 Today we examine the importance of the progressed Moon.

In looking at a chart, we have three factors. There are the natal positions, showing our inherent tendencies. There are the transiting planets, showing us the “real time” worldly factors at play in our chart. And there are the directions and progressions, indicated “progressed” factors in our lives. While the natal and transit positions are actually where the planets were/are in the sky, progressions are entirely symbolic movements.

What Are Progressions and Directions?

While all progressions show us the evolution of the various planetary functions within us, they do not show “real world” events. They show factors of our inner life, not necessarily our outer affairs, though it could be said that when a significant outer event happens, it necessarily affects our internal responses to those events.

In my readings over the years, I’ve always included the positions of the progressed Moon, since I’ve found that symbolizes what we’re feeling and how we’re experiencing life on a day to day, week to week, and month to month level. It shows us our “progressed feelings” about whatever we’re going through in that moment. It is the general “experiential atmosphere” we’re feeling personally at given periods of our lives.

The “Pulses” of the Progressed Moon

The Moon transits all the signs every 27 days, mas o menos. That means 27 days after we’re born, the Moon returns to its natal position. If we use the benchmark of a day equaling a year, that means we get a Lunar Return when we are 27, and another around 54-55. I have found these are the most important “emotional re-set” points in our lives, since our feeling function “returns home” and gets a chance to evaluate how it has grown in the 27 years preceding the return.

In the 27 years between birth and the first Lunar Return, the Moon speeds up and slows down, depending on the sign and its relationship to the progressed Sun. That’s why some periods in our lives seem to stretch out, while other times we seem to race through the months. This is related to the concepts of Perigee and Apogee, where the former is nearest the Earth and so much faster in its orbit than when it is the latter, or the farthest point in its orbit from the Earth. When the Moon is at Perigee, it moves about 15 degrees a day. When at Apogee, less than 12 degrees a day.

For example, I have a natal Sun at 12 Aries and a natal Moon at 14 Aquarius. This is known as a “Third Quarter” Lunar phase. I explained the 8 Lunar phases in the article The Eight Lunar Phases, so please take a new look at that when you’re finished here. Anyway, in the day (progressed year) after my birth, my Moon progressed through the last half of Aquarius and at the 27 Aquarius point moved into a “Balsamic” Lunar phase relative to my Sun. This is the closing phase of the Moon, in antiquity known as a “old Moon,” so it could be expected this was a closing phase of my life.

It remained in that phase until it made its conjunction in July 1955 when I was 4. That means my progressed Moon zipped through just short of 2 signs (58 degrees) in only 4 years! That’s moving very fast. At the first progressed Lunar conjunction with my Sun, it began a “New Moon” Lunar phase.

As each phase marks a different energy of the Moon relative to the Sun, noting the shifting Lunar phases in our lives is an extremely important indicator of our progressed personality fluxes. In our next article on the subject, we’ll examine how it manifests in the signs as it applies to our charts. As the progressed Moon transits every sign in every house of our chart every 27 years, we can learn a lot about our feeling responses by noting the various transits of the progressed Moon.

We have 1712 guests and no members online