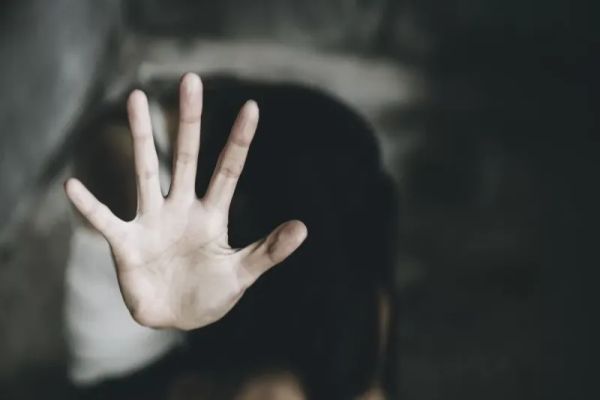 The New Moon in Virgo on August 27, 2022, is harshly aspected by Mars. So the New Moon in August 2022 meaning is learning to control impatience, impulsiveness, anger and sexual frustration.

The New Moon August 2022 astrology increases the risk of hate, violence and war. It will also highlight the growing problems caused by misogyny, pedophilia, and violence against women. This is a dangerous New Moon, but Saturn square Uranus promotes significant cultural and political change.

The New Moon on Saturday, August 27, 2022, is located at 04°03′ Virgo. There are no major fixed stars at this degree. However, a square to Mars, the planet of war, is a powerful influence with an orb of only 0°02′. And Venus, the planet of peace, is opposite Saturn and square Uranus. Four challenging red aspects make this a dangerous moon phase. 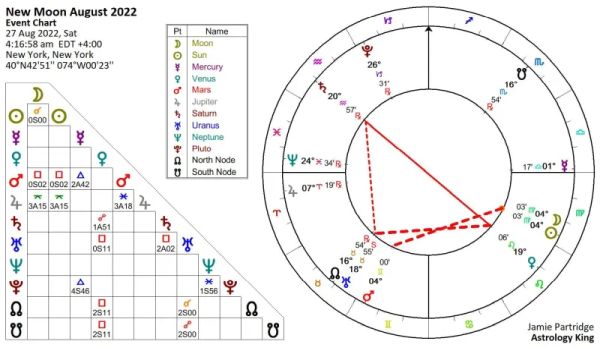 Sun conjunct Moon represents the end of one cycle and the beginning of another new 28-day cycle. It gives a refreshing burst of energy and initiative. But it also brings emotional balance, not irrationally emotional, and not too cold and calculating.

So the New Moon in Virgo 2022 is excellent for making a fresh start, turning over a new leaf, or starting a new project. You can also question old habits, behaviors, and beliefs as you search for new and inventive ways to make progress.

New Moon square Mars can cause irritation, impatience, impulsiveness, hate, anger and sexual frustration. If such potentially destructive energies are not channeled constructively, there is a risk of aggression, accidents (especially cuts and burns), recklessness, revenge, violence, and conflict.

Venus opposite Saturn can bring sadness and loneliness because of delays and limitations affecting your love life and finances. Misogyny and mistreatment of women are possible. Significant age differences between partners may cause problems.

You may feel pressured by loved ones, but the best thing is to show you care through working hard and practical help. This is a good time for preparation work. Try to pay off any debts or organize them to know where you stand.

Venus square Uranus can test the stability of a love relationship through unexpected urges or events. An increased need for freedom and excitement can test your patience with a loved one or lead to wandering eyes. If dating, you may be attracted to exciting or eccentric people but avoid taking risks if meeting someone you know nothing about.

This aspect can also indicate a lack of self-control with your finances. Beware of a tendency to buy things impulsively, especially unnecessary items. There may also be instability in financial markets. Due to unforeseen circumstances, sudden and erratic swings in stock markets and commodity prices are possible. The ability to find peaceful settlements to disputes and war will also be hampered by changing circumstances.

Saturn square Uranus was exact in December 2021. But because of retrograde motion, this significant planetary aspect is applying (getting stronger). It reaches an orb of 0°37′ in early October 2022. Like last time, there may be more COVID-related restrictions, natural disasters and political instability. There may also be other restrictive changes and unexpected restrictions.

The New Moon August 2022 astrology may bring changes you don’t want. It could also make it harder to make the changes you want. Rising tension and sudden, expected changes can be very frustrating. But if you stay open-minded, patient and flexible, what at first seem like challenges, can be turned into opportunities to rid yourself of negative, restrictive, and limiting things.

The New Moon in Virgo 2022 is already challenging because of the four red aspects. Five planets in retrograde motion make it even more dangerous. It makes it more difficult for people to understand each other. Understanding and compassion seem to be lacking. It seems like more bad things are happening in the world. More violence, psychological abuse, accidents, suicides, and death.

The New Moon August 2022 astrology will highlight these growing problems. India recently freed 11 men convicted of gang-raping pregnant Muslim women. Many young men have been encouraged to mistreat women by the toxic influence of Andrew Tate. School teachers complain that young boys write essays about him and his ideas.

Thankfully, Andrew Tate has been banned from Facebook, Instagram and TikTok. Saturn square Uranus does mean significant cultural and political change. New Moon in Virgo 2022 is not the time to resist change, nor is it the time to overreact. A well-considered, methodical, patient, and step-by-step approach is best.

If the New Moon August 2022 astrology directly affects your Sign, you can read about it in your free Monthly Horoscope. Finally, for more details about how it affects your natal chart, see Sun Transits.