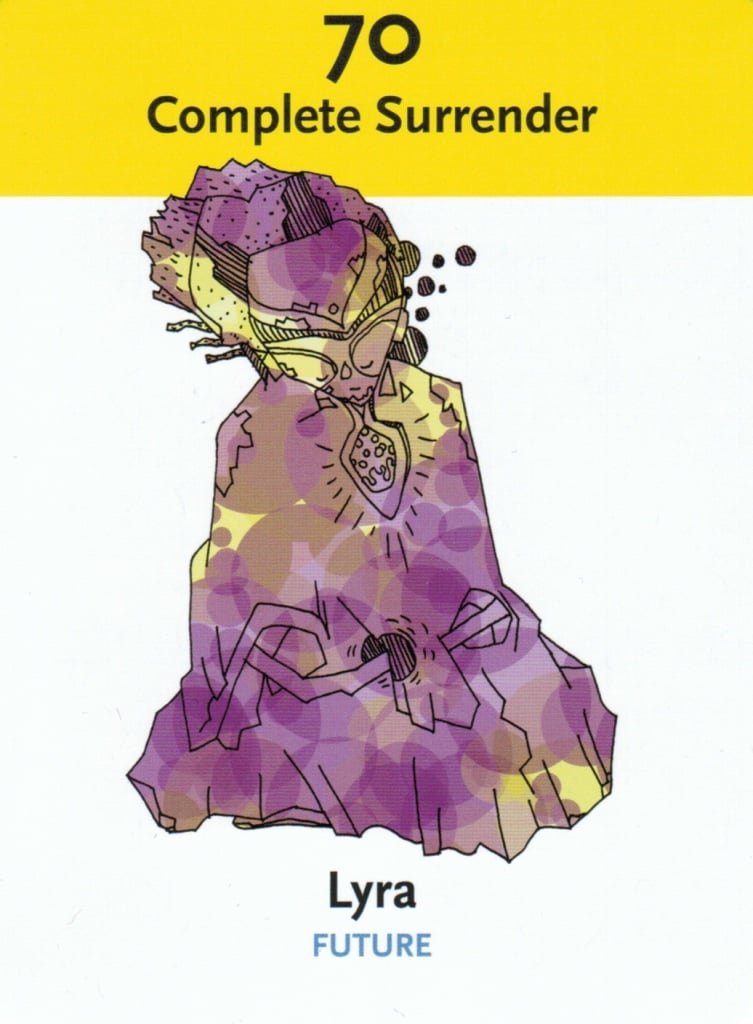 As we have discussed in the card text of the last few months, humanity has been moving through a very volatile passage that has seen unprecedented polarization accentuated on your world. While this is expected for any civilization as it transitions from third to fourth density, it can be a very unsettling time in which it feels like the very foundation below you has been shattered and you must rebuild your framework of reality. That state of being is often a frightening one for humans because you feel the loss of control and yet try to cling to the old and step up the attempts to control reality.  Of course, furthering the control dramas only leads to more frustration.

The most important action you can take in such a time isn’t an action at all – in fact, it is the most counterintuitive thing possible. Let go. What do we mean by that? This is one of the most significant lessons of this transition from third to fourth density, as your ancient Lyran family learned. As a 3rd density species, you are quite used to exerting your will (using solar plexus energy) to not only navigate reality, but try to bend it to your will. In 3rd density, the illusion was created that it is only you (the person, the small you) who is the creator of your reality through sheer force of intent. However, as you mature as a species and move into 4th density (using heart energy), you learn that what was seen in 3D as “intent” or “manifestation” was really an attempt to control the experience. As you transition into 4th density, you begin to experience reality in a whole new way. You begin to see that trying to control reality in the same way you did in 3rd density creates much more pain and frustration. You also begin to see that when you let go and surrender to the higher wisdom of the universe of which you are a part, life can flow smoothly in an unexpected and drama-free way – even in times when your experience of reality is something you don’t prefer.

So let’s look at this on the macrocosmic and microcosmic level as we often do. On the macrocosmic level on Earth, you see so much strife in the world and opposite sides fighting each other. The human tendency is to get involved in the fight – to try to change others’ opinions or somehow “prove” your point of view is correct. Where does that get you? Usually it only increases your frustration. (You saw this played out on a large scale in the ancient Orion civilization). This is a nexus point for ego evolution. Egos want to fight, to insure they have the last word, or to collect others of like mind to create an echo chamber of thought that only mires itself deeper into illusion. These types of self-reinforcing delusional realities cannot sustain themselves, for they, too, begin fracturing from within as you are seeing now. When we say this is a nexus point for ego evolution, we mean this quite literally. It is the ultimate ego training. What is being asked of you now in your evolutionary journey is to resist the seduction of the ego that will try to compel you to take sides, argue your point, or try to control reality. Opinions arrogantly expressed—an extension of ego—are distractions that move you away from spiritual evolution. The only true tool you have to enhance your evolution at this point in time is the opposite, counterintuitive approach. Surrender, back away from the raging conflict, and go within to address the conflicts in there that are mirrored in the outer world.

This leads us to the microcosmic aspect. When working with one’s own spiritual evolution, egos often take a similar approach. They will berate you, judge you, push you, and sometimes even delude you into making yourself into an unrealistic image of spiritual perfection that does not exist. This inner dynamic also must change as you move into 4th density. You will find that 4th density energy is much more supportive of compassion, nurturing, and inclusion, which will facilitate a deep process of inner integration when the process is engaged. To engage the process you need one thing … surrender. Notice and then let go of the ego’s demands to change or control reality, and instead be present with whatever is arising in your reality in such a way that the gift of that moment reveals itself in stunning clarity. There is always a gift waiting for you in any circumstance. But sometimes, the only way to see it is to let go and be still. You will find that, paradoxically, complete surrender actually becomes complete participation in all that the universe is offering to you. And we wouldn’t want you to miss a second of that experience!