Orion (Present) Seduction and Addiction: Card of the Month - December 2018 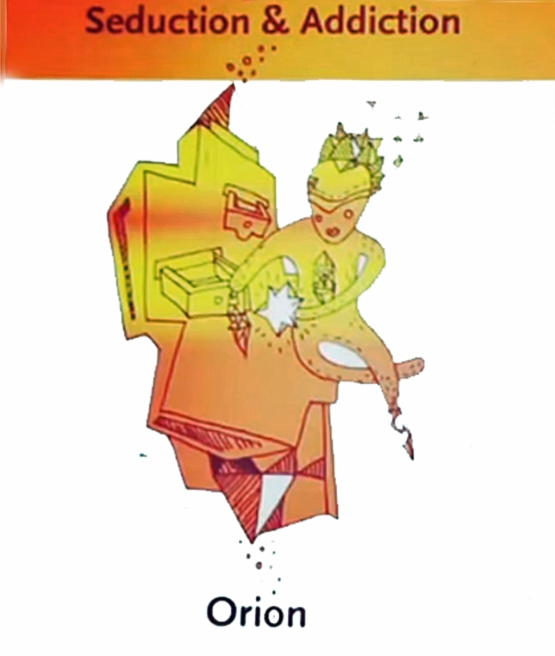 For the third month in a row, an Orion card wishes to be explored as a card-of-the-month message. This is quite unusual and thus it appears that the collective consciousness on your world will be exploring Orion themes in the latter portion of 2018. This is no surprise, for as we’ve said previously, it is part of the evolutionary cycle at the beginning of 4th density for there to be wild swings in polarity in the outer world, and deep processing of polarity in the inner world.

The theme of this card is quite significant. What does “Seduction and Addiction” mean? As you know, life in 3rd density is hard because of the state of separation that consciousness is exploring. Because of its intensity, human egos create coping mechanisms to deal with the pain of such a separated reality. These coping mechanisms include physical substances (such as alcohol, tobacco or drugs), but those are the more obvious ways to cope. The deeper coping mechanisms are more invisible. They include the creation of elaborate belief systems to cope with emotional or physical pain, as well as behaviors (such as repressing emotion) in order to avoid feeling the intensity of life on Earth. It is these more invisible habits and patterns that are addressed by this card, for the physical coping mechanisms like alcohol are just reflections of the inner ones.

As these coping mechanisms appear to dull the pain, the ego grasps them more. Thus, they become very hard to shift. There is an infinite combination of behavioral patterns possible, but some examples include: Self-blame (to avoid feeling victimized), Being a martyr or sacrificer (to justify the anger of not feeling loved), Pushing all emotions into the body or the mind in order to avoid feeling, and so many more. As humans reinforce these behaviors by doing them over and over again, the addiction becomes stronger, and the behavior becomes even more ingrained.

As a civilization moves into 4th density as you are now, it becomes imperative to begin unraveling these so-called behavioral “addictions” because they only create more pain as the frequency increases. As we have said many times, this requires you to begin a deep and vulnerable process of nonjudgmental self-observation. You will need to learn your patterns and learn to recognize the triggers. Most importantly, you will need to learn how the ego seduces you into lapsing back into old self-destructive patterns. This is the addiction of which we speak in regard to this card. Becoming aware of the patterns will begin breaking the addiction cycle, once you learn how to, in a sense, resist lapsing back into the addictive behavior.

Humans very often believe in this concept of “free will” that we hear discussed so often. But what they don’t realize is that there are unconscious forces that push the ego to make choices, because an ego can never make choices not distorted by its own painful experiences. Those unconscious forces are the collective energy of all that you have denied within you. Those forces will always compel you to choose the experience that will move you toward healing, even if that means going through a dark night of the soul first. Each time you torture yourself by “freely” choosing a path that is really only a repeat of the behavioral patterns from which you feel you cannot escape, the cycle continues. The point is to step outside of the so-called “free will” of the ego, which cannot really free you from anything. Addictions are the realm of the ego. To shift them, you cannot use the ego. Thus, you have to go deeper.

Humanity is now at a place that it has to address these ego delusions and seductive habits and patterns that keep you stuck. This must be done both on the collective and individual levels. If you are reading these words, then it is likely you have already begun this process, but there are times when you feel stuck, or blind. In those times when you cannot see yourself clearly, when you cannot understand the message that reality is giving to you, go more deeply into the pain – into the energy or issue that the behavioral patterns protected you from previously. You don’t even have to understand it intellectually (though understanding may come). Just be there. Just show up. Just feel it. Just ask for help from the higher consciousness of which your small self is a part and then let go. Be even more aware in watching your inner world. When you least expect it, revelations come. Healing comes. And as it does, the seductive nature of the previously-destructive addictive patterns begins diminishing. This is your road to true freedom.