The Costs of “White Collar” Corruption and Crime 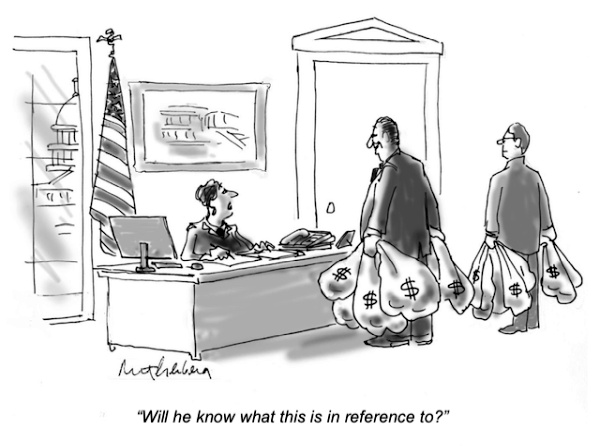 One of the problems — or “diseconomies” — of scale, is its increasing vulnerability to corruption and crime. In small, close-knit communities, criminals mostly know their victims, and the community gets to know its criminals. So there’s an inherent disincentive to try to commit crimes.

Not so in our modern society’s boundary-less, disconnected “neighbourhoods”, and in massive centralized systems, where it’s easy to stay anonymous and the victim is just an address or a number. Modern corpocracies seek more and more centralization because it aggregates power, eliminates competition, and puts impenetrable bureaucratic and legal barriers between the corpocracy and its bewildered, helpless, abused, anonymous “customers”.

Customers have now been largely eliminated from modern extreme capitalism, replaced with “users”. “User” is, of course, a synonym for “person addicted to a product”. That is exactly what we have become, utterly dependent on amoral profit-crazed and uncontrolled corporations. Our names on invoices have now been replaced by “user IDs”. Just sign in and roll up your sleeve.

So we have an ethics-free corporate world, just ripe for criminals and the corrupt to exploit on a massive scale, mostly in either legal “grey areas” (to allow corporate crime where it increases profits) or completely, anonymously beyond detection.

Modern corporate systems are now completely rife with corruption and crime, and it is the “customers” — sorry, the “users” — who have to pay for it. Beside the simple greed of banksters, one reason that most of us (especially the poorer “users”) pay mega-usurious 28% interest on unpaid credit card balances, is that the now-endemic rate and cost of highly-sophisticated credit card crime — phishing, cloning, theft, money-laundering and a host of more complex schemes of fraud and extortion — is through the roof. So what is the banksters’ and credit card companies’ response to this crime spree exploiting their systems? Just call it “a cost of doing business”, and flow all the costs through to the “users”. They’ve learned this well from the mega-polluters — the euphemism for refusing to take responsibility for allowing and contributing to the rapid destruction of the planet is “externalizing” costs. The “user” is the addict; let them pay the costs of production. If they don’t like it, they don’t have to “use” our products.

But of course, we do have to use their products. Their oligopolies control the supply, the distribution, the hyper-marketing, and the regulators, law-makers and politicians that once constrained their misbehaviour.

None of this is new, though at one time we did at least have anti-monopoly laws and usury laws; no more. Many corporations pay massive bribes and kickbacks to access foreign markets or “guarantee” contracts, though of course they’re not called that. The money goes to despots; the costs are “externalized” to the “users”. These corporations pay armies of unscrupulous lawyers to intimidate any “user” who dares make a fuss. They pay money to organized crime for “protection” for their stores, factories and executives. They grant no-bid, wildly overpriced tenders to organized crime to ensure their construction sites are “incident free”.

Of course, government departments and agencies with budgets large enough to attract criminal interest — like the US Defense Department, that can’t even pass a basic audit of how it’s spending the “users'” trillions — are also ready targets. So are our chaotic, cobbled-together “health care” systems. No problem, though. Just a cost of doing business, passed along to the same “users” (except of course those rich enough to pay for complex tax-evasion schemes).

And now, thanks to modern un-securable online computer systems, they pay ransom not only for the safe return of kidnapped executives, but for the safety of their computer systems as well. The recent panic-causing pipeline ransom only cost five million dollars, but a recent report says ransom totalled a half billion last year, and is growing at 300% per year. Add in Bitcoin flimflammery and the total is likely much higher.

I’ve been told that the average “user” now has, thanks to hackers, over 60 online accounts or passwords compromised each year. Apparently, it would be too expensive for corporations to fix their systems to stay ahead of the thieves, so guess what? It’s left up to the “users” to deal with the losses, and the mess.

This is all entirely a problem of scale. Centralized, massive, un-regulatable, thoroughly corrupt and crime-ridden corporate oligopolies, governments, and systems are now simply unmanageable. Like all systems, they will keep growing until the “cost of doing business” becomes unaffordable. And then, if they’re large corporations (or the military), they’ll be bailed out, or else they’ll put their numbered and offshore companies into bankruptcy, stiffing their gullible suppliers, lenders and shareholders, while keeping all their amassed fortunes, in one country or another, intact. Either way, the “users” will pay.

Until they can’t. At some point, the Ponzi schemes of stock, resource, currency and real estate “markets” will run out of even debt-leveraged billionaire buyers. And then, like all massively-overpriced “markets”, they’ll collapse with a suddenness none of us is prepared for. Except perhaps the corporatists and criminals who know it can’t last, who will retreat to their debt-free remote hideaways, like the gangsters of the old west after a heist. At least until they run out of food, and discover their currency is now worthless to buy more.

Then they’ll join the rest of us, wondering how we got here, and what to do next.

We have 1601 guests and no members online