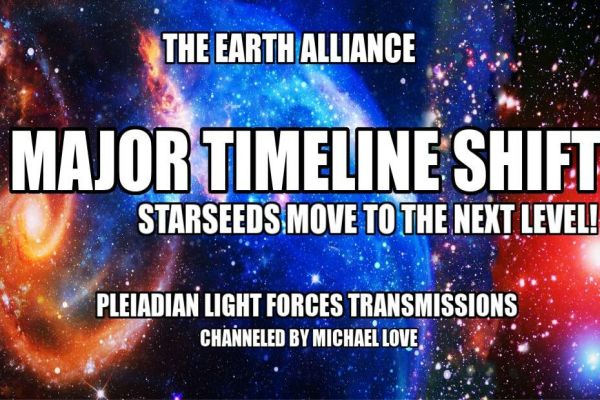 The earth alliance reports that several earth weeks ago, a major timeline shift occurred on planet earth and the starseeds of earth literally woke up and found themselves existing in a new reality!

The pleiadians say this powerful timeline shift was a collective shift in consciousness and was triggered by several powerful jolts of high-vibrational cosmic gamma light that came from the galactic core around July 4th, creating galactic fireworks show and some serious independence!

This timeline shift was noticed and experienced primarily by earth starseeds whose 4th and 5th DNA strands are active because this is the exact resonance of the gamma light waves that impacted the planet at that time!

During the morning hours of July 4th, 2022, the light beings of earth underwent a very real dimensional shift and were elevated completely out of time-space sync with 3d humanity as well as the 3d earth!

Since that moment, many starseeds have experienced a strange sense they are no longer existing in the same time or physical space they were in before this event, even though things still look the same around them!”

Let’s find out what really happened back on July 4th, 2022, on planet earth!

What is a timeline shift anyway?

Though a very real and powerful timeline shift indeed occurred on July 4th, no one moved through time or space and no time or space shifted so again, why does it seem like one is now existing in a new time and a new space?

We simply call these other levels of reality, dimensions!

As your consciousness level expands you are able to decode these different dimensions and they are manifested ad the world around you.

What changed on July 4th, 2022 around you was the collective outwardly manifested reality!

Millions of earth starseeds ascended up to the next highest level including you and you are now perceiving this new outwardly manifested reality!

This new timeline can feel as if you exist in a new time and space, but we assure you are still in the same place and time, ‘now and here’!

It’s just that the vibrational rate of this place and time sped up just a bit so it naturally appears different!

Part of the strangeness feeling is due to the fact that you just landed in a new world where you have never ventured plus there are millions, possibly billions of other earth beings manifesting this new timeline with you and each one is creating a small piece of the whole! The strange feeling will dissipate in a few days as you learn to live in your new world!

This new earth timeline and perceived reality was manifested by collective consciousness but what triggered such a massive expansion of consciousness, to begin with?

If you will remember, on July 4th, earth was bombarded with several super waves of fifth-dimensional cosmic gamma light!

The earth alliance says these recent gamma waves were the largest and most powerful we have ever seen!

This cosmic light resonates in the 40-100 hertz frequency range which is the exact frequency of your 5th strand of DNA and this light can instantly activate a dormant 5th strand causing it to plug back into the 5th chakra, the throat chakra. When a DNA strand plugs back into its corresponding chakra, universal light of that dimension starts flowing through the body and this allows consciousness to decode that dimensional level as the outwardly perceived physical reality!

The fifth dimensional level of the universe has been called 5d new earth or what the ancients called heaven and nirvana!

Earth science has shown that 40-100 hertz gamma light can instantly recode DNA into a higher form of functionality.

Since 2012, massive beams of gamma light have been streaming into earth’s atmosphere and have now triggered a massive planetary awakening and for the first time, beings are making their way into the fifth dimension while walking on the earth!

How does this timeline shift affect you personally?

We have heard so many starseeds recently saying time is whacked out and they feel like they just landed on an alien planet. Many who have lived in the same place for years say since July 4th something feels very different about where they live and that it’s no longer the same place! Many have also noticed very different behavior among the beings around them. If you’ve noticed things breaking and not working correctly then you’re definitely not alone!

Many starseeds have been struggling to adjust and balance themselves onto this new collective timeline so here is our counsel on how to ease the transition:

First know that this shift was a realized goal of the light beings of earth!

The primary focus of our mission to earth has been to create a better timeline here by raising the consciousness of humanity!

When enough people do the inner work to change their own consciousness level the end result is a successful expansion of the collective consciousness that can change the entire world in a positive way.

This is exactly what has happened and there will be many positive rippling effects for days and weeks to come!

Of course, the powerful incoming light directed to earth by light forces greatly aided in triggering this global shift.

It takes a lot of energy and focus for a large group of people to manifest a collective shift in consciousness and grand work is honored by all the forces of light working on humanity’s ascension.

In the ascension process, one continually expands their consciousness opening up access to new realms and new realities that present incredible new opportunities and possibilities.

As these higher levels of expansion unfold, new levels of challenge are presented as well for one to fully become a master of the new level.

Sometimes even positive growth can be a bit anxiety-provoking but know that you will integrate this new level quickly and you will make the adjustments needed for your success and mastery!

It’s important to remember that you have just arrived in a higher better place, and this is a very positive thing!

Everything around you is vibrating higher now, so it is critical to upgrade everything up to match this vibration! You are already a master of this and we know you will be quite successful!

Welcome your new timeline! Enter in good and faithful one!

We give you great honor for your achievements!

It will take a few days to become oriented here!

We suggest that you take one day out, step back, be relaxed, be hopeful, and just lay everything out on the table!

Look at all the pieces of life and see what parts need to be upgraded to work on this new 5d timeline! You do not have to finish this upgrade project in one day, so give it some time!

The universe is re-evaluating all things at this time and taking inventory!

Streamline all systems in your life and work to be more adapted to this new timeline!

We can tell you some things that worked on the lower levels simply will not work on this new level. You will know the parts that won’t work here! See what fits and what doesn’t fit! If a thing is broken and it seems super hard to fix, it’s probably time to upgrade it to the next level! The universe will make a way for you to accomplish this!

Look at a thing, analyze it, and see what energy it has to see if you can adjust it and retrofit it to work on the new timeline, if not consider scrapping the old thing and be creative and come up with something new!

At the end of the day, it’s all about alignment, so the fastest and most efficient thing you can do to align with this higher timeline is to raise your vibes to be in resonance and harmony with it!

Earth starseeds understand the importance of doing the necessary inner work to clear out lower energies that no longer serve them! They know they must transmute all lower energies to be able to progress in their ascension making it possible for new high-vibrational things to manifest!

A new higher timeline has indeed arrived on planet earth, and it is your destiny to become fully aligned with its incredible manifesting energy!

The universe is always pulling us up higher and we must rise to meet the challenges of the day! Maybe it’s a good time to really let go of some things and choose to wake up in the morning with brand new purpose and excitement!

It is truly an amazing time to be alive on planet earth as the starseeds of earth move onto the new 5d earth gamma timeline to forth a better world where all humanity lives in peace, freedom, and abundance forevermore!

Let us know what you’ve experienced over the last several weeks as this new, higher timeline was put in place!

It’s ok if there have been struggles as even the very masters had to do some extra work to step up onto this new level!

Let’s walk along together now into the new world before us to see what awe and beauty it holds!

Michael and the pleiadians

We have 771 guests and no members online