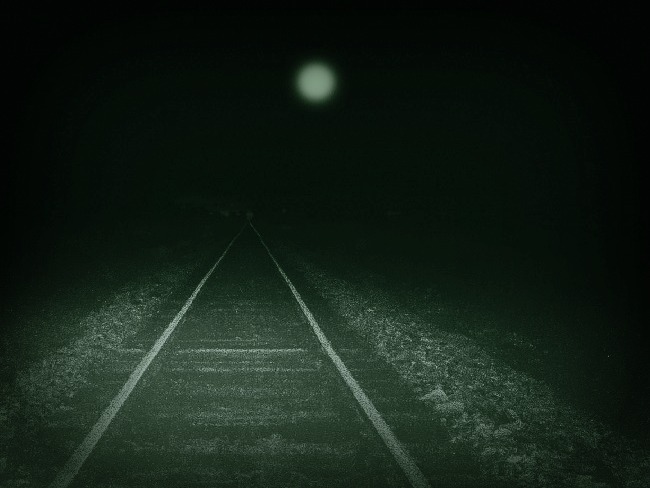 In December of 1931, a railroad section foreman named Will McClain fired one of his workers, Louis McBride, because he apparently sabotaged a section of a track that caused a freight train derailment. In retaliation, McBride then beat McClain and killed him with a pick-ax. McClain's body was later found by a search party along the side of the tracks. McBride confessed to the murder and was later executed for the crime.

Not long after the murder, people began seeing a mysterious phenomenon named the "Gurdon Light," a strange glowing light that floats along the railroad tracks. Many believe that the light is the spirit of Will McClain haunting the tracks; specifically, they believe that the light comes from his lantern which he carried while working along the tracks.

One of the first sightings was by a conductor named John. While driving a train, he saw a light on the back platform and observed that this light was following the train before it shot up into the air. It continued to follow the train for over a mile and then shot into a local cemetery.

Since then, thousands of people have gone to the train tracks in hopes of seeing the Gurdon Light. Several eyewitnesses say that the light flashes slowly, floats about one to three feet in the air, and then veers off and vanishes. To this day, there has been no complete explanation for what the Gurdon Light might be.

In November of 1994, an Unsolved Mysteries photographer took the first known photograph of the "Gurdon Light" (as seen above). The same photographer later captured a video of the light moving along the tracks. 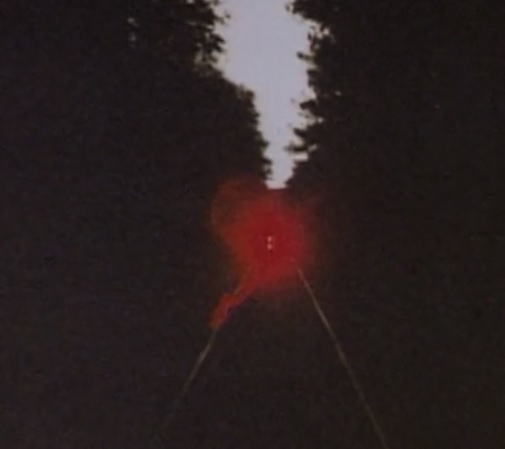 Investigations: Dr. Charles Leming investigated several theories as to what the Gurdon Light may be. One theory is that the lights may come from headlights on the interstate. However, Charles was able to find several eyewitnesses who claimed to have seen the light before the interstate was opened. Another possible explanation for the Gurdon Light is swamp gas, created by decomposing vegetation which spontaneously combusts. However, many eyewitnesses claimed to have seen the light when it was windy, so it could not be swamp gas on those occasions.

Another theory is that the light is the PS electric effect, which occurs when quartz crystals, under immense pressure, emit an electric current. Gurdon sits above large amounts of quartz crystals and a fault line, which supports this theory. Also, many people claimed that the Gurdon Light was seen after the murder of Will McClain, which was around the same time that a major earthquake occurred on the fault. However, what cannot be explained is how the current migrates above the surface and into a ball-like shape.

Extra Notes: The case was featured as a part of the December 16, 1994 episode.
Results: Unsolved

Background: The town of Gurdon is located in Arkansas and has a population of 2700. The town's most famous attraction is the Gurdon Light.

Town History: As to the town's interesting history, Gurdon was founded in the late nineteenth century, one of many timber towns located along a railway. The town is famous for its role as the founding place of the International Concatenated Order of the Hoo Hoo, the oldest industrial fraternal organization in the nation.

In 1880 the town was incorporated. Located on US 67, the town grew up around the railroad lines and timber industry, which continues to play an important role in the area's economy. Early development of the town was tied to the arrival of the railroad to Clark County. Gurdon came to be because of its location at the intersection of several important lumbering railroads and it's location near stands of timber.

Construction of railroads played a crucial role in the growth of the lumber industry. The town started as a construction camp on the Iron Mountain Railway, which was completed in 1873. Soon the railway constructed a branch to Camden leaving a main line from Gurdon which increased the regional centrality of town. The town was attractive as a mill site, allowing the town to participate in the rapid expansion of the lumber industry in the South. The small settlement was a junction for railway to Womble-Amity-Mt.Ida-Glenwood, and another to Camden-El Dorado-Northern Louisiana. 1968 marked final passenger service to the city.

The St. Louis Mill and Wood Cutter Co was one of the first businesses in the city and was the parent company of the Gurdon Lumber Co. Today, the city's economy is based primarily on the timber industry.

Of historical significance is the Gurdon Jail, because of its association with early social development of the city. In 1888 mills in Gurdon, especially the Gurdon Lumber Co, exceeded the number of shipments of cut lumber of all other milling towns in Clark Co. combined. By this time, the population had approached about 1,000, mostly of those working at the mills. The growth of the town led to need for a jail. Arkadelphia, 17 miles away, had a large jail and major offenders were sent there. Typically only local offenders were sent to Gurdon. Constructed in 1907, it is one of the few intact surviving structures from this 'boom' era in the city's history. It was added to the National Register of Historic Places in 1989.

The town is probably best known as being the founding place of the International Concatenated Order of the Hoo Hoo. This lumbermen's fraternity was founded in 1892 by a set of lumber industry workers stranded in town by rainstorms. They devised the social organization as a joke, and created colorful officer designations such as the "Grand Snark of the Universe". The joke took hold as a social organization, with branches worldwide.

The name Hoo Hoo refers to a tuft of hair on the bald head of the first president, Charles McCarer. The number nine is important and the unconventional organization also incorporates many symbols from ancient Egypt. The Black Cat is the mascot of the order and in honor of the cat's nine lives there are nine members of the board, annual meetings begin at the ninth hour on the ninth day of the ninth month, the original dues were 99 cents, the initiation fee was $9.99, and the membership was restricted to 9,999.

Elizabeth Taylor accepted the title of Miss Hoo Hoo in 1948.  Two U.S. presidents have had membership in Hoo-Hoo. Theodore Roosevelt was given the prestigious membership number 999 for his work promoting the importance of forests. Warren G. Harding was inducted in 1905.

After its beginnings in town, the organization grew tremendously. The first club established outside the U.S. was founded in Canada in 1924, and other groups started forming around the world. In 1981, the organization moved its international headquarters from Boston (where it had been since 1970) to Gurdon and dedicated the museum that same year. The Museum and International Headquarters are located in a restored log house on Main Street.

A monument commemorating the Hoo-Hoo's is located on North First Street. The monument features small statues of two black cats with their tails curled upward in the shape of the number 9. The monument, which was added to the National Register of Historic Places in 1999, gives visitors a brief history of the organization and those who have served in it.  A bronze plaque, sculpted with Egyptian Revival engravings, was sculpted by noted artist George J. Zolnay, was completed in 1909. At that time it was affixed to a building, then occupying the site of the Hotel Hall. When the building was demolished in 1927, the plaque was moved to its present location and rededicated.

The Gurdon Light from Marcus Lowe on Vimeo.