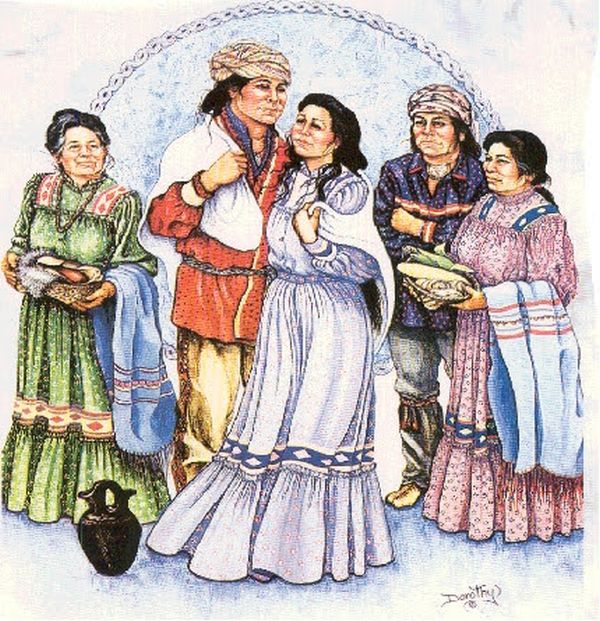 When a young man wished to marry a Cherokee woman, he consulted her parents, whose consent was necessary. Even the parents of the young man had to approve the marriage.

(Editors note: The Cherokee Clan system prescribed who and who could not marry. Two people from the same clan were absolutely forbidden to marry, even if the two individuals were not from the same village. All members of any given clan, which passed through the women, were considered as blood related. Also, a person could not marry a member of their father’s clan. These taboos kept the blood-lines pure and prevented intermarried birth defects, which may would have weakened the genetics within the tribe.)

If the marriage was approved, a time was appointed and a priest was asked to officiate. Early in the morning of the day of the wedding, the priest gathered two roots (species not given; or whether if they were the same or two different kinds. Ed.) and laid them in his hand, a little apart. He turned to face the east and prayed. If, during his prayer, the roots moved together, it meant the marriage would be happy. If they did not move together, the marriage was usually not completed. Sometimes, one of the roots wilted faster than the other; this was also a bad sign.

In case two signs were bad, the priest would forbid the marriage. If the signs were good, the people concerned assembled in the Council House where the priest prayed that the couple would live long and happy lives together. He told them that they must be faithful to each other. Unfaithfulness was the only cause for divorce.

(Editors note: Infidelity and adultery were just as unacceptable for a man as a woman; however, penalties for an unfaithful wife was more sever. A woman could divorce her husband if he failed to provide for his family or was a proven coward, which brought shame and dishonor on his wife and her clan family.)

Sometimes, after a man’s request that a woman be his wife had been approved by both of their families, he began to take venison from deer he had killed to her just as if she were his wife. Thereafter, she was considered almost the same as his wife and would be treated as an adulteress if she were unfaithful. During the actual marriage ceremony in the Council House, the older men took the higher seats on one side of the Council House, and the older women took their seats on the higher seats on the other side; younger married men and women sat below the older ones. The bride and groom’s mothers took part in the ceremony.

Thank you!
ॐ Namasté - Blessings!
"Life is an echo, what you send out comes back."
© 2008-2022 crystalwind.ca. All rights reserved.
Seven Steps of Walking the Red Road
Harvest Moon
Seeking Your Path
Get This App Now!