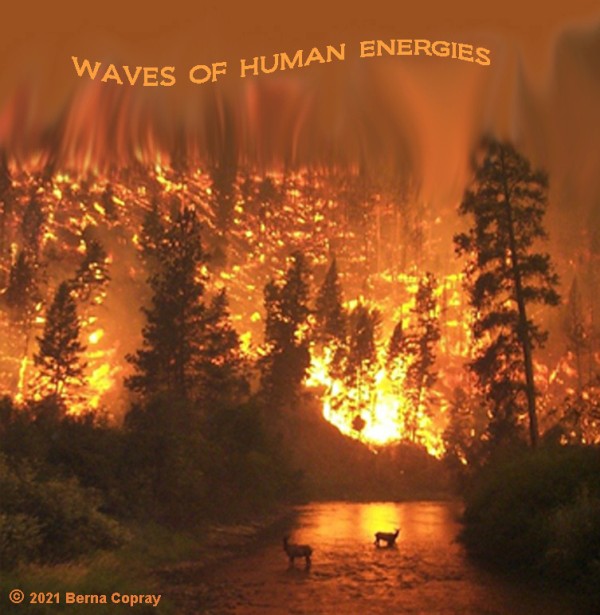 Wildfires are usually highly destructive forces. This is obvious these days in the American state of California, and other parts of the American and Canadian West.

What do wildfires have to do with spirituality?

Fire can be a very destructive force. That’s obvious in what’s going on today with the wildfires. But fire is also a cleansing and healing force.

Part of the reason these so-called natural disasters happen is to counteract or to cleanse, the effects of harmful human energies on the planet today.

As you know, there’s so much so-called negative energy out there today. It’s negative in the sense that it’s not necessarily constructive or helpful. But it’s not the end of the world either.

These human-caused waves of energy do trigger so-called natural disasters like forest fires. Again, they can be a cleansing force, and often are.

This is a great example of how your mind, your human minds, can create or destroy—far beyond what you ever imagined.

Everything’s connected, you know that. So the human mind is connected to what you would call the natural forces. You’re all connected.

When humans are in the mental state they are in today, that affects what you call nature, Mother Nature, the natural world.

The intensity of what’s going on in many human lives and in many human minds today, is enough to literally set the place on fire. And that’s what happening.

Nothing is disconnected from anything else. When you have these so-called natural disasters, forest fires, floods, there is always a strong element of human interference.

But that can work the other way too. Because you have such great power, your minds have such great powers, you can also use that power to put out a forest fire, for example. Or to calm the winds, as Jesus did on the Sea of Galilee in that famous Bible story. (In Mark 4:35-41.)

Your minds possess great powers. Use them wisely.

This video, “Healing by Fire In A Sacred Mayan Cave,”  shows us how fire is not only a destructive force, but is also a healing power.

We have 1601 guests and no members online