Mary - Prepare your Hearts Without Judgment

Mary - Prepare your Hearts Without Judgment 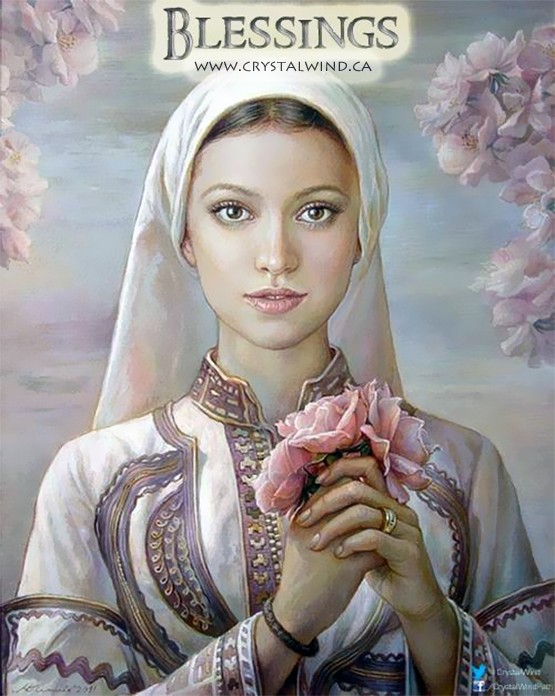 Some think (that besides this blue sky there is nothing), that the universe is summarized in your planet, inside this big blue ball and that the night gets dark, because someone turns off the Light. And then some stars appear, but where are these stars? Are they glued to this ball? Of course not. This sky that you see is actually not palpable, it does not exist as matter, it is the reflection of the Light around your planet, because of the air you breathe, the Light that comes from the Sun causes this effect.

And when there is no Light, there is no blue sky, you look at the universe and the stars, at other planets, at an infinite world that your mind still cannot perceive. You are a tiny dot in this great universe, you are children of Father/Mother God, loved and protected by him, like all other beings that exist in the universe. Ahhhh and before anyone is already wondering: Father / Mother God, does not change his Love from one child to the other, he loves everyone equally. Ahhhhh, but this is absurd for you: “How can Father/Mother God love a murderer, a criminal! Exactly, like me, who am such a perfect being?” - Father/Mother God does not judge; that murderer, that criminal, is loved by him in the same way. And I would say that he even has more attention, precisely because he is lost, because he does not know how to find the way to the Light.

But you still think this is absurd. Those you call criminals cannot have the Love of any of us, least of all Father/Mother God. Why not? All of them were created by whom? Everyone has the divine spark. So how will Father/Mother God's children be loved differently? My children? Father/Mother God does not judge or punish, you reap what you sow. So these souls, these beings who do not follow the path of Light, will reap the consequences of what they have done, but they will not stop being children of Father/Mother God, they will not stop deserving His Love. Every being in the universe, every soul, knows and knows very well the universal laws, which are the laws that keep the universe in balance. Yes, there needs to be laws…

It doesn't matter what the decision is. Then many ask: “But Father/Mother God does not judge! Really Father/Mother God doesn't judge, he doesn't judge the way you understand judgment. You understand by the laws of your planet, but universal laws were created, and are maintained and used throughout the universe. It is not Father/Mother God, who sits at a table defining what each being deserves or not, each being reaps what he sows. If he sows Light and Love, he will reap Light and Love, if he sows lovelessness, that is what he will reap. Because that's the universe, that's the universal laws. So “it is not up to beings to judge others” when there is a judgment, according to universal laws, it is not a being who judges, it is the collective, it is the whole, there are many who analyze each case and make decisions.

There are no prisons, there is no place in the universe where evildoers are trapped, this is the creation of your world. There is a whole job of training, teaching, treatment to recover that soul, that being, this is “the supposed punishment” that we apply. Of course, there are more serious decisions. deeper decisions that in your eyes would be absurd. would be violent. would be inadmissible. Ahhhh, you think the laws are inadmissible, this is really funny. You don't know anything about the universe, you don't know anything about souls, about missions, about lessons to be learned. So you are about to go through a very complex process on this planet, where the universal laws will be applied here, not your laws of men, these we don't recognize, we don't accept and we don't understand.

Laws will apply against those who act on a race, on a group, on a country, on a city. That is, people who deliberately make other beings suffer, only for their own good, will be exposed to universal laws. And those who arrived here, and who made this planet; the inequality and lack of love that exists today will be the most deeply judged, because they implanted lack of love here, implanted evil here. Then, many may ask at this moment: “And why are you only doing this now?” - Everything has a time for Father/Mother God, this planet was placed this way by Father/Mother God, to serve as a lesson to the entire universe. What causes the source to move away?

What consequences are brought to an entire race when you turn away from Father/Mother God? So this planet lived millennia and millennia of the Third Dimension, to serve as an example to the entire universe. But now this time is over, you can now become high and evolved beings and this planet will never be a low dimensional planet again. Earth has fulfilled its role, it has fulfilled its mission, the mission to show the universe what it is like to live in duality and with free will . Do not question Father/Mother God, everything has a reason, revolting against him will not get you anywhere. What you need to do right now is to open your heart and accept your evolution, and accept everything that will happen on this planet. It will be difficult times…

Where you will have to learn, how the universe works. This planet will once again be part of the great Galactic Federation and as such, it needs to follow the rules and its inhabitants as well. Then you will learn how things actually work in the universe, there is a lot of Love involved, but the laws must be respected and applied. The word judgment is in vogue right now. So, I just say to each one of you: Sons and daughters do not judge anyone, many do not know what they once did on the soil of this planet. So how can you judge a brother? You may have done much worse than him and at this moment, all this load will be analyzed and it will be up to you to transmute all this in the right way; with a lot of forgiveness, with a lot of cleaning, with a lot of learning and awareness.

The moment is not to judge the other, nor to judge anything or anyone, the moment is for the truth and the truth will appear to each one, however ugly it may be, you will see your own truths and everyone will have the opportunity to redeem themselves, to that can evolve. Now, those who will be judged by the universal laws, there are no more moments of redemption because they have already been given this time and they have not accepted it. On the contrary, they made it worse. So there is no more time, laws will apply immediately. It will be up to each of you to just trust that everything that will be done is for the good of the planet and for your evolution. Nothing will be done by partial or passionate attitudes, everything will be done in respect of universal laws. So prepare your hearts.

Don't let your minds get angry or scared, because everyone who goes through this process will have why. And surely, you will understand. Look within, seek the "Higher Self" and if it gets too difficult, seek each of us. And for sure, we will take each one and relieve any tension and any and all feelings that may arise at the moment. You need to believe this, especially with your heart.

Angels and Light Therapies
Vania Rodrigues
Founder and Owner of Canal Anjos Luz e Terapias, Projeto LACAM and Um Toque Colibri, totaling more than 110,000 subscribers to my Youtube Channels, in which I share Channels and Messages received from various Beings of Light.
Founder and Director of the Nova Gaia Association - NGO in order to bring Christ Consciousness to the hearts of all.
Training: Magnified Healing® Course, Professional Radiesthesia, Crystal Therapy, Facilitator and Akashic Records Reader, Reiki - Level 3A and 3B -  Access Consciousness® Bars Practitioner