Conscious Community - Fellowships of the Future
A+ A A-

Conscious Community - Fellowships of the Future 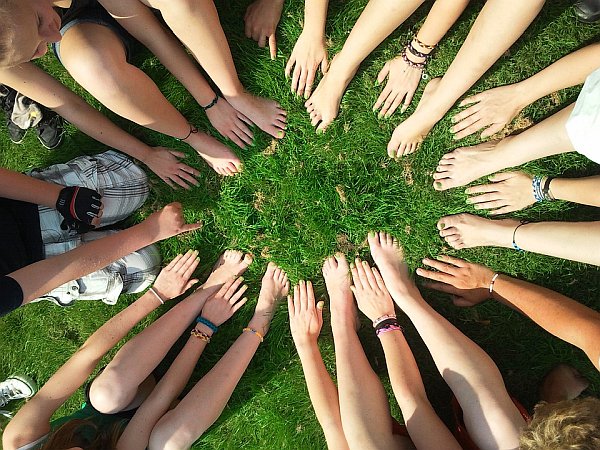 We all search for our community throughout our lives. We want to meet and become friends with others who share our interests, and have fun when we’re with each other. Finding our community is a tricky thing, since as we change and mature, so does our perception of who are friends truly are.

Long ago, we had a stronger sense of community because we lived closer together, and if we wanted to talk to someone we had to be in their presence. Then came forms of long distance communication, and we began to be able to speak with others who might be thousands of miles away. Now we can communicate instantaneously around the world by written, audio, and video means. This makes finding our community easier, despite the physical distances between us and the members of our community.

Thanks to the internet and social media, millions of people are connecting in new forms of community, both local, regional, and global. Our world began to shrink toward the end of the 19th century and the inventions of devices which could bridge time and space. As that arc of evolution developed, it resulted in a mass awakening in the middle of the last century, where people around the world began to experience a greater spiritual view beyond the dogmas of traditional religion.

As that historic pulse developed, it revealed an Aquarian consciousness which has allowed millions around the world to move beyond racial, economic, and religious tribal states of consciousness into an awareness of the shared ideal of the greatest good for the greatest number and cooperating in bringing forth concrete works which will benefit humanity in the future. As you’re reading this here, then no doubt it describes you. Welcome to the future of humanity!

Unfortunately, we’ve also had a parallel movement developing since the 1930s in the form of the global economic hydra which succeeded in remaking the entire world into fragmented market segments. This, along with a very unhealthy competitive standard where no one “wins” except for psychopaths, the very rich, or those with connections, has resulted in a very discouraging situation where a sense of separation and isolation pervades the general atmosphere. This is the exact opposite of the greater future humanity is evolving toward.

It is the nature of humanity to want to be part of a community where we share interests, come together for mutual protection and fellowship, and find a sense of connectedness and interrelatedness. The current global economic model creates the antithesis of this, with its harsh competitive “get all you can any way you can” mentality. This is the bitter fruit of the selling of the virtues of selfishness during the 1980s which basically told the world “get yours or get out of the way.”

While this law of the jungle may have been the norm for most of recent human existence, around the world millions have awakened to different ways to relate to each other in this material world. Around the world, people who have awakened to our interrelatedness are embracing a cooperative “win-win” mentality, which is more productive than the current model, which assumes that if someone “wins” then someone else must “lose.” This is a dying way of viewing our life interactions, since humanity is awakening to their interrelatedness with the life that’s all around us.

Each finger on the hand must cooperate with the other fingers and the hand itself if it is to do what it is supposed to do. Each part of the plant cooperates in its part of creating the greater good for the plant. If plants can do it, so can humanity, but we will have to unlearn attitudes which separate and divide us rather than unify us.

A New Frame of Reference

The emerging Aquarian era won’t be just one more hierarchical control system. That sign represents collective consciousness, where the whole is greater than the sum of the parts. All who are breaking free of old ways of relating to each other, matter, consciousness, and Nature Herself are learning how to operate in a new frame of reference relative to "All-That-Is," aka "God."

In our search for a greater sense of relatedness, we are growing individually, socially, and spiritually. As we awaken to the greater common good and our part to play, we can consciously move toward cooperating within the global or holistic awareness we've embraced. We then find our part by doing the best we can in the collective field, cooperating with others as the collective effort generates the natural synergy of group interactivity. As we learn to align with the larger collective forces bringing allies together, we become more conscious in recognizing and welcoming those who will be our Brothers and Sisters in the future.

As you know, the planets at this time are moving into the Grand Compression of December 2019 through April 2020. This period will develop group structures in play all of 2020 and beyond. They will condition the “group performance” energies shaping the preliminary “pulse” of the coming 200 year Era which will be launched April 1 2020 when Mars conjuncts Saturn at 1 Aquarius. That begins a 9 month gestation period creating the future conditions which will be expanded for 20 years at the Great Mutation of 1 Aquarius in December 2020!

That Grand Mutation begins a 200 year era of Jupiter conjunct Saturn in Air signs. Air is relatedness. We’ve been in the materialistic emphasis of Earth for 200 years; the next 200 years we’ll collectively experience less density and more interrelatedness. 2018 and 2019 have been a time of structuring the important global pulse of relatedness growing stronger each year.

According to the great Sage and Spiritual Astrologer Sri Yukteswar Giri, we’re now accelerating our collective evolution as we see the dawning of what in the East is called the “Dwapara Yuga,” or the Era of Electromagnetic Remembrance. That means the current global tensions are arising from the “separation of the wheat from the chaff” as a huge number of the human race break free of the gravitational pull of the dying Kali Yuga, the Era of darkness, ignorance, selfishness, violence, and destruction.

The Tibetan Master DK has made it clear in the Alice A Bailey material that the spiritual evolutionary Plan for humanity and the Earth will lead to the ending of “the heresy of separateness.” Taking a larger view, we have all been assisted by the magnetics of the process so that we have been and continue to meet those we could dance with if the synergy is there.

Part of that process involves learning to feel connected with those who are on a similar path of Self-Realization as we are. We awakened to a heightened “feeling-knowing” at the December 2012 Solstice, and stabilized it during the Water trines of 2013 and 2014. Our ability to feel connected has been assisted by Neptune in Pisces, immersing all in a collective sense of connectedness within the larger field of “oceanic consciousness.” Those who have opened to a greater feeling awareness have experienced a greater connection with others and the world itself, and through feeling all there is to feel, known occasional experiences of being connected to “All-That-Is” within our greater Livewave.

This naturally opens us to a greater compassion, a vaster sense of connectedness with all other life, and allows us to feel our commonality with all humans since the first one became self-aware. Pisces is where we feel without time or spatial boundaries interfering with the cognition that we are One Race, One Love, and One Life. We ALL have the ability to contact timeless shared feelings of being human, and part of the One Life that is our entire planet with all the other forms connected to our planet.

Our true community is our spiritual community, where we are free to express our individuality with others who also express theirs within an atmosphere of mutual respect and good will. The community is one of the “3 Refuges” for those who seek Truth and higher awareness. As we live our lives, we continually find “the Wisdom, the Way, and the Community.” We can and will find connectedness within the larger community of truth seeking Souls who share our inclinations. That’s what we’ll explore in the next part of this series.

On a final note, the same house and sign that rules “groups” in Astrology also rules “friends.” That’s why if they’re not your friends, you’re in the wrong group. While it may take a little while to see clearly who is and who isn’t, eventually you’ll know who is safe and who isn’t. That’s why when you do find friends who accept your strengths and weaknesses, your gifts and deficiencies, your frustrations as well as your past and present triumphs, then you’ve found your Community, at least for now.

See you further down the Path a ways....