Chinese Zodiac Signs
A+ A A- 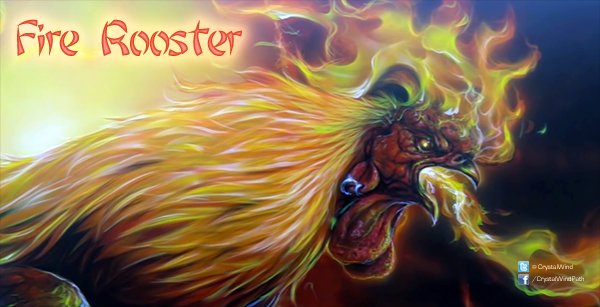 People can and should influence their own fate! It's useless to depend on either the past or the future! In The Year Of The Fire Rooster 2017, our understanding of the future, like our notion of future events and our direct participation in these events, will in 2017 make up an integral part of the reality of resultant changes.

2017 will be the Year Of The Red Fire Rooster, whose soft gait will surprise, gladden, frighten, and possibly disappoint those not especially competent members of the Zodiacal circle. Same as it ever was! We have the right to demand from the coming year heavenly manna falling into our hands, with nary a thought of relying on miracles or secret knowledge. In the coming year pragmatism and realism, as always, have no competition! Nothing can be done because the last few years showed and proved "who's who," who has softness within, and who has a real firm foundation, not changing direction at the first changing conjectures of surrounding events. Same as it ever was! In The Year Of The Red Rooster 2017 we can count only on ourselves and on our own abilities. Yes! Same as it ever was!

However, past mistakes did not disappear for naught. Indeed now, as never before, an important lesson has been mastered. So 2017, this honest and candid period, is a time without illusions and the obsolete dogmas of the century. In this time interval everyone knows his place, and everyone knows his worth, and knows the abilities of his opponent. And although 2017 is not yet the beginning of a new era, new ideas are just coming into being and demand refinement, nevertheless the choice of which side to take is now (if not yesterday). Of course, if you want this choice to be made for you… it is time to separate the wheat from the chaff! Such are the basic leitmotifs of The Year Of The Red Fire Rooster 2017!

And so… let us take a look and analyze in detail what awaits us in 2017 from an astrological perspective. First and foremost it must be said that according to the eastern zodiacal system (also sometimes called the Chinese Zodiac), in 2017 the Rooster is the patron element of Fire, which automatically endows it with the color red. Of course in any situation the epithet "red" is synonymous with the epithet "fiery," which is obvious even for Europeans, even though it often happens that the color systems of "east" and "west" are at root different.

But this is clearly not a case where the first synonym that comes to mind when we hear the expression "Red Fire Rooster" is actually true in the fullest measure. Fury, aggression, pressure, belligerence, but along with these - "window-dressing," egoism, despotism. With that, naturally all the indicated definitions are relative enough and in every particular case the position of our current patron (as it applies to 2017) will be individual at the highest level. Nevertheless, it is obvious that this future time stage will be incredibly active and dynamic. It contains quite a few positive moments, but significant complex situations as well. At a minimum, it will be interesting, and those who are used to taking action without thinking will unequivocally remain winners.

It is curious, but in the eastern tradition the Rooster is an incredibly multi-faceted image. Apart from the obvious irascibility, impulsiveness, emotional instability, and fury, he also possesses the following qualities: pedantry, accuracy, generosity, and courage. In sum, people born in the year of the Rooster often combine in themselves all these moments, albeit in different stages. But it is worth remembering that in our particular case we're talking about the Red Rooster, to whom the element of Fire corresponds. In China, Fire is one of the fundamental elements that created the world. Flames are useful for both the bestowing of life (in the form of ash, which is left in the process of burning, making an excellent fertilizer) and in taking life away (for example, in forest fires). To a certain degree, Fire here is a symbol of fairness, and also of rules. Therefore, they say in China that the year of the Fire Rooster is a time when everyone receives what he deserves.

In other words here will be a minimum of some kind of spontaneous sudden situations. On its face there is a cause-effect relationship: income, the sum of one's "amorous adventures," career success -- all of this and many other things will strongly depend on how you "behaved yourself" in the previous time period. But, of course, actions over the course of the year will also be important. It's worth remembering that the Chinese yearly cycle doesn't fully correspond with our European one. Thousands of years ago in the era of the great imperial Heavenly dynasties until now they have used the lunar calendar, so that 2017 The Year Of The Red Rooster begins on January 28, 2017, and ends accordingly on February 15, 2018.

The sensual and psycho-emotional spheres in 2017 will undergo substantial changes. And here it is important to point out that the Rooster is quite a jealous creature, as everyone who has lived for a while in a village knows. How fiercely this leader-egotist defends his brood hens! In this sense the future life period will not be any different from a typical rooster. But remember that jealousy may destroy relationships quite a bit, even marriages and family unions that had seemed quite durable. You needn't take it as a unique "test of fate." There is no kind of subtext whatsoever here. It's about a general emotional tendency that becomes stronger because in 2017 the Moon and also Neptune and Pluto (indirectly, but to a significant degree), will have a specific influence on us, inhabitants of Earth.

This is like adding oil to a fire, and it is necessary to be especially attentive to one's words and actions. Besides that, the rooster always strives to take part in any conflict. He loves to criticize and isn't ashamed to do so. It's important to understand this image, because in 2017, communication, such as it is, will have decisive meaning, in part, in the process of solving conflict situations. But here it is necessary to know the limits, as it is said, because compromise is hardly ever possible in the process of mutual concessions. Now and then it is fair and natural to speak from a position of strength and this often becomes the only true solution. The Fire Rooster will teach us this in the course of the whole year: aggressive diplomacy.

Zodiac signs which belong to the element of Fire naturally will receive general "bonuses" from the future time period, but it is necessary to remember that big possibilities will always lead to a large number of limitations in other directions, and that with great power comes great responsibility. In other words, these people will be really lucky, not just once but even twice. But it will be necessary for them to work twice as hard as others, otherwise their unrealized potential will kill them. But don't doubt that Pluto will definitely try to do this, for it isn't in vain that he bears the honorary title of "Dark Planet," nor was it in vain that our ancestors called Pluto "Planet V."

In their own way the signs of the element Water will end up in less positive situations, that is circumstances will not be regarded so favorably for them. But the "demand" from them will be lower. That is, in reality they don't have to solve any real large scale fundamental conflicts, so to speak, on which depend the "fate of the world." But the Rooster nevertheless will "give no quarter," because in the end the elements of the current period are completely opposed to the elements of Water, and specific differences are natural here. Concerning the Water and Earth signs, for them only the most general tendencies are fair, as shown above, and only toward these should they orient themselves.

As a whole, 2017 will be successful for businessmen, athletes and soldiers; in general. for people of action. If you are used to acting first, and then thinking (generally speaking), if thoughtfulness drives you into a deep melancholy and dynamic action gives you strength, then the Red Fire Rooster will appeal to you. Initiative, industriousness, generosity, and honesty are the key positive features of this time period. Fanaticism, egocentrism, and coarseness — these are the weaknesses which you should rid yourself of.

We have 1348 guests and no members online