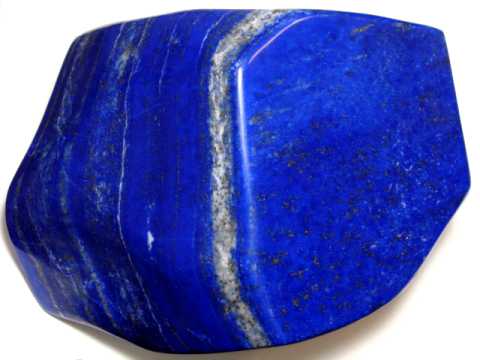 The Lapis Lazuli stone has quite a prestigious history. The priest-kings of China presented this stone as an offering to the Lord of the Universe in ceremonies at the Temple of Heaven. The Targums indicate that lapis lazuli was used for the tablets of the Ten Commandments. The ancient kings of Ur and Sumer included the stone in their tombs. Even Tutankhamen’s mummy wrap contained some of this stone.

The Egyptians used to carve an eye out of the Lapis Lazuli and ornament it with gold. A chapter of the Book of the Dead was then transcribed onto the stone with an account of the passage of the soul of the deceased through the realm of death. The eye was a sacred amulet which was used in the worship of the god Ra. When Ra received the amulet, it was believed that he placed the eye upon his head.

The Lapis Lazuli is a powerful stone with a diverse range of effects on the body. The effects of the stone vary based upon the person who is wearing the stone and how the stone is worn. For individuals who are in accord with the vibrations of this stone, it can make them more sensative to the higer mental and spiritual vibrations.

This spiritual energy opens up the higher centers of awareness and allows for a better flow of this vital energy through the chakras.

As to stones, – have near to self, wear preferably upon the body, about the neck, the lapis lazuli; this preferably encased in crystal. It will be not merely as an ornament but as strength from the emanation which will be gained by the body always from same. For the stone is itself an emanation of vibrations of the elements that give vitality, virility, strength, and that of assurance in self. 1981-1

So whether from vibration of numbers, of metals, of stones, these are merely to become necessary influences to make thee in attune, one with the Creative Forces … so, use them to attune self… 707-2

Lazurite and azurite derive their names from the arabic termlazaward, a term meaning blue. It is an opaque stone which is composed of several minerals. Generally, the stone contains small grains of pyrite. The stone is commonly found in Afghanistan, Iran, Italy, Turkestan, Chile and California.

Edgar Cayce on the Power of Color, Stones and Crystals is an excellent study of the use of these objects in the readings: Buy the book HERE!

We have 1039 guests and no members online