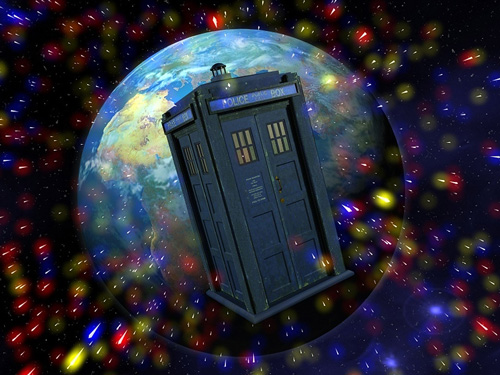 The Big Question: Is time travel possible, and is there any chance that it will ever take place?

Why are we asking this now?

Two Russian mathematicians have suggested that the giant atom-smasher being built at the European centre for nuclear research, Cern, near Geneva, could create the conditions where it might be possible to travel backwards or forwards in time. In essence, Irina Aref'eva and Igor Volovich believe that the Large Hadron Collider at Cern, which is due to be switched on this year for the first time, might create tiny "wormholes" in space which could allow some form of limited time travel.

If true, this would mark the first time in human history that a time machine has been created. If travelling back in time is possible at all, it should in theory be only possible to travel back to the point when the first time machine was created and so this would mean that time travellers from the future would be able to visit us. As an article in this week's New Scientist suggests, this year – 2008 – could become "year zero" for time travel.

Is this really a serious proposition?

The New Scientist article points out that there are many practical problems and theoretical paradoxes to time travel. "Nevertheless, the slim possibility remains that we will see visitors from the future in the next year," says the magazine says, rather provocatively.

It has to be said that few scientists accept the idea that the Large Hadron Collider (LHC) will create the conditions thought to be necessary for time travel. The LHC is designed to probe the mysterious forces that exist at the level of sub-atomic particles, and as such will answer many important questions, such as the true nature of gravity. It is not designed as a time machine.

In any case, if the LHC became a time machine by accident, the device would exist only at the sub-atomic level so we are not talking about a machine like Dr Who's Tardis, which is able to carry people forwards and backwards from the future.

What do the experts say about the idea of time travel?

The theoretical possibility is widely debated, but everyone agrees that the practical problems are so immense that it is, in all likelihood, never going to happen. Brian Cox, a Cern researcher at the University of Manchester, points out that even if the laws of physics do not prohibit time travel, that doesn't mean to say it's going to happen, certainly in terms of travelling back in time.

"Saying that the laws of physics as we know them permit travel into the past is the same as saying that, to paraphrase Bertrand Russell, they permit a teapot to be in orbit around Venus," Dr Cox says. It's possible, but not likely.

"Time travel into the future is absolutely possible, in fact time passes at a different rate in orbit than it does on the ground, and this has to be taken into consideration in order for satellite navigation systems to work. But time travel into the past, although technically allowed in Einstein's theory, will in the opinion of most physicists be ruled out when, and if, we develop a better understanding of the fundamental laws of physics – and that's what the LHC is all about." 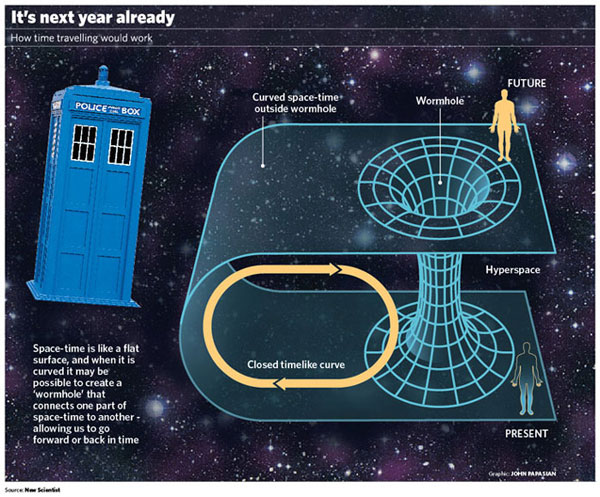 Why is the possibility of time travel even considered?

It comes down to the general theory of relativity devised by Albert Einstein in 1905. It is the best theory we have so far on the nature of space and time and it was Einstein who first formulated the mathematical equations that related both time and space in the form of an entity called "space-time". Those equations and the theory itself do not prohibit the idea of time travel, although there have been many attempts since Einstein to prove that travelling back in time is impossible.

Is there anything to support the theory?

Lots of science fiction writers have had fun with time travel, going back to H.G. Wells, whose book The Time Machine was published in 1895 – 10 years before Einstein's general theory of relativity. Interestingly, it was another attempt at science fiction that revived the modern interest in time travel.

When Carl Sagan, the American astronomer, was writing his 1986 novel Contact, he wanted a semi-plausible way of getting round the problem of not being able to travel faster than the speed of light – which would break a fundamental rule of physics. He needed his characters to travel through vast distances in space, so he asked his cosmologist friend Kip Thorne to come up with a possible way of doing it without travelling faster than light.

Thorne suggested that by manipulating black holes it might be possible to create a "wormhole" through space-time that would allow someone to travel from one part of the Universe to another in an instant. He later realised that this could also in theory be used to travel back in time. It was just a theory of course, and no one has come close to solving the practical problem of manipulating black holes and creating wormholes, but the idea seemed to be sound. It spawned a lot of subsequent interest in wormholes and time travel, hence the latest idea by the two Russian mathematicians.

Apart from the practicalities, what's to stop time travel?

The biggest theoretical problem is known as the time-travel paradox. If someone travels back in time and does something to prevent their own existence, then how can time travel be possible? The classic example is the time traveller who kills his grandfather before his own father is conceived.

Cosmologists, renowned for their imaginative ingenuity, have come up with a way round this paradox. They have suggested that there is not one universe but many – so many that every possible outcome of any event actually takes place. In this multiple universe, or "multiverse" model, a woman who goes back in time to murder her own granny can get way with it because in the universe next door the granny lives to have the daughter who becomes the murderer's mother.

Where does this leave the time machine in Geneva?

The science writer and physicist John Gribbin, who explains these things better than most, points to a saying in physics: anything that is not forbidden is compulsory. "So they expect time machines to exist. The snag is that the kind of accidental 'time tunnel' that could be produced by the LHC in Geneva would be a tiny wormhole far smaller than an atom, so nothing would be able to go through it. So there won't be any visitors from the future turning up in Geneva just yet. I'd take it all with a pinch of salt, but it certainly isn't completely crazy."

So, not completely crazy, just a bit crazy.

So will we one day be able to travel into the future?

We have 1349 guests and no members online