When God Shows Up on Earth 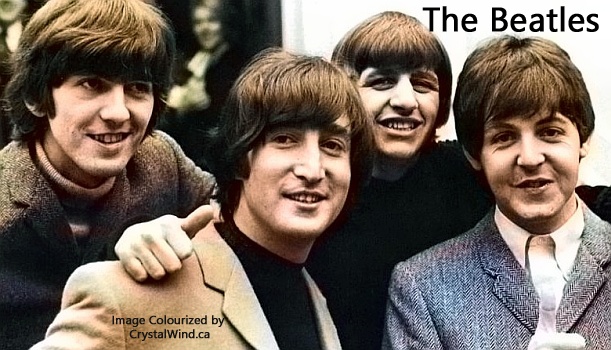 I am a big Beatles fan. The more I hear their music, the more I recognize the sheer genius behind it. I saw a rare YouTube video of an especially vibrant 1964 Beatles concert in Australia at the height of Beatlemania. (“Beatles Live—Australia”) One comment on the YouTube page struck me:

“I'm a solid atheist. But I swear John, Paul, & George (still love u Ringo!) were slapped on the back by a higher power. How does it happen that 3 of the most incredible songwriters EVER just come from nowhere? If I meet God, and I tell him he didn’t give me enough information to believe, God might say ‘I gave you proof. The sun, the earth, and the Beatles.’”

The writer is far from an atheist. He or she recognizes the presence of God in the world through the Beatles.  God manifests divinity by way of people. We are the windows through which heaven shines into the world. The Beatles, talented as they were, did not give themselves their talent. It was seeded within them by a Force far beyond their human personalities. Their role was to bring it to a waiting world, which they did masterfully. Those talented musicians served as vessels through which the Creator delivered huge gifts to make the world a better place

During this season many people celebrate God showing up on Earth. Christians remember the birth of Jesus Christ. Jewish people observe Hanukah, when God miraculously extended light to beleaguered freedom fighters. Hindus enjoy Diwali, and people of African descent observe Kwanzaa. All of these holidays recognize that for a moment in time, God reached into the world and lifted it closer to heaven.

The same God that blessed the world through Jesus, the Beatles, and other visionaries wants to bless the world through you. You have talents that no one else can bestow. But you have to honor your inspiration enough to deliver your gifts. The only difference between great people and mediocre people is that great people trust and act on their guidance. The German philosopher Goethe said, “As soon as you trust yourself, you will know how to live.”

A turning point in my career came when I was about to lead a weekend seminar. Until that time I went into my programs doubting my abilities, wondering if I was qualified, questioning my decisions. At the outset of that seminar I decided to do an experiment: I would imagine that any intuition I had about where to take the program, was guided by a Higher Power. I would not judge my choices. Instead I would envision that I was working in co-creation with an intelligence that knew how to create the best possible program.  The results were phenomenal! The seminar turned out to be the most successful I had ever done, and I enjoyed myself far more than I had when I doubted my decisions.

Certain talents are unexplainable except as intervention by a Higher Source. Mozart wrote his first opera at the age of six. He later stated, “It is when I am, as it were, completely myself, entirely alone, and of good cheer . . . that ideas flow best and most abundantly. Whence and how they come, I know not, nor can I force them”  Genius inventor Nikola Tesla explained that his ideas came to him in a flash, from a source beyond this world. He would then work them out in his mind such that the inventions were complete before he even reached his laboratory to construct them. Beethoven wrote many of his greatest compositions when his physical ears were essentially deaf.

A Course in Miracles Lesson 353 asks us to affirm, “My eyes, my tongue, my hands, my feet today have but one purpose; to be given Christ to use to bless the world with miracles.”  You don’t have to be a Christian, or any religion, to put this vision into action. You just have to live true to your passionate purpose. Every day we have a thousand opportunities to help God show up in the world.  To let someone into a traffic lane when you could speed ahead. To phone a friend who is hurting and say, “I just want you to know I’ve been thinking about you and I’m on your team.”  To publish your book or song or start your business, trusting you will reach the right people who can benefit from it.  World change agents are so focused on giving life to their visions that they pay no attention to naysayers, within or without. If Steven Spielberg, Steve Jobs, or Barack Obama had denied their gifts expression, the world would be emptier for it.

You don’t need to be a Spielberg, Jobs, or Obama. Just quit comparing yourself to other and finding reasons you can’t. What is within you must come forth. Live true to your visions, knowing that you did your part to make the world a little more like heaven. When you do, you will look forward to getting up in the morning, your heart will be at peace, you will sleep well, and one day some not-so-solid atheist will say, “I now see proof that there is a God, after all.”

Focus Your Attention Within

Your Ultimate Guide to What the Difference Between Anxiety, Fear and Stress Is

The Power Of Intent - Teachings of The Masters
Become a Patron!

We have 1390 guests and no members online