I am going to start my article with some good news. I think we all need some good news after all of the chaos we have been through this past year. The good news is that Jupiter and Saturn are going to be conjunct on 0 degrees Aquarius on December 21, 2020, which is the Winter Solstice and the celebration of light. This is the end of a Capricorn cycle and the beginning of the cycle of Aquarius energy. We have been under Saturn energy for the past two and a half years and that is karmic energy. Uranus, the planet that rules Aquarius, will bring many unexpected changes. 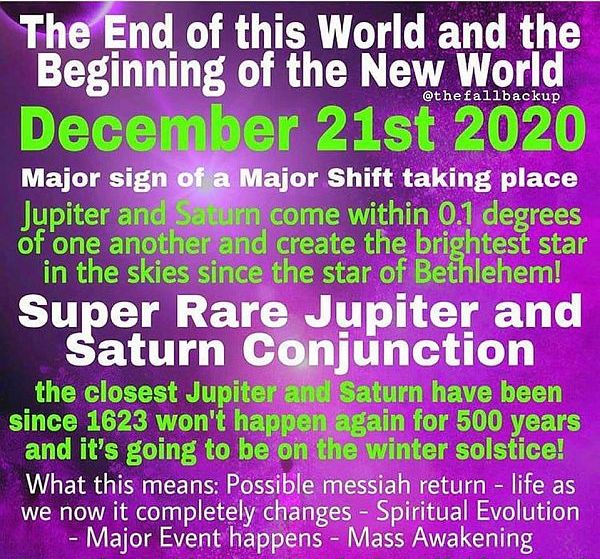 The End of this World and the
The End of this World and the
Beginning of the New World
December 21st 2020
Major sign of a Major Shift taking place
Jupiter and Saturn come within 0.1 degrees of one another
and create the brightest stari n the skies since the star of Bethlehem!
Super Rare Jupiter and Saturn Conjunction
the closest Jupiter and Saturn have beens ince 1623 won't happen
again for 500 years and it's going to be on the winter solstice!
What this means: Possible messiah return -
life as we know it completely changes
Spiritual Evolution - Major Event happens - Mass Awakening

I just received an article from a trusted friend that says a major change will happen in mid-October. If what this email says is true, there will be no election. My dream told me 10 years ago that we will not have a government. We will be setting up communities of light on a different level of reality. The meaning of 0 degrees Aquarius is “The power to assume responsibility for crucial choices arrived at after mature discussions with those who share this power” Who will assume that responsibility? Will it be the Light workers? Is it time to create a new reality and communities of light on the New Earth? URGENT See here!

The next prophecy I have been expecting to happen is there will be a great earthquake and the sun will be darkened and the moon will not give its light and the stars (ships) will come down from heaven. I figured it would happen soon because I have a very large beautiful ship outside my bedroom window and it has been there since February 20, 2020. I know from my email that there are many ships out there right now. I think it is time for Divine Intervention.

October is the time I have been waiting for because the planets are extremely intense this month, especially toward the middle of the month. Mars conjunct Eris is dominant this month and it will trigger off Saturn, Jupiter, and Pluto. Mars has been considered the planet of war, probably because it became desolate years ago when there was an all-out war on that planet. Many Beings from Mars came to earth at that time in a space ship and built the Pyramids.

Today is October 1, 2020 and it is the full moon day with the moon in the fire sign Aries. This full moon has Mars/Erison 24 degrees Aries and it is in a square to Saturn, Pluto, and Jupiter. This means more chaos. The sun is on 8 degrees Libra and by the middle of this month the sun will make a T cross in the heavens with the Capricorn planets and Mars in Aries.

The meaning of 24 degree Aries is “The possibility for man to gain experience at two levels of Being. In some unspecified way its symbol is a guarantee that man can operate successfully at two levels of consciousness. Be open and be able and willing to shape your translucent mind in the form revealing spiritual fulfillment. You will then be able to experience life and power on inner as well as outer planes.” I have been experiencing that energy for several days and feel like I am living in two different realities at the same time. This energy will probably last until the new moon on October 16, 2020.

I just heard that both president Trump and Melania have the COVID-19 Virus. He was exposed to the Virus by his top aid Hope Hicks who tested positive for the Virus. How many other people who are in the White house will catch this Virus? What effect will this have on our election? Only time will tell, yet it is also interesting that they came down with this Virus on this full moon.

The new moon on October 16 has Mars in an almost exact opposition to the Sun and Moon and is squaring Jupiter, Pluto and Saturn. This is an extremely intense T cross. The 24 degree sun is on the degree of “The ability to develop, for inner strengthening, new modes of response to basic life situations”. Uranus is opposing retrograde Mercury at that time and this means we will experience more chaos. Uranus rules Aquarius and it also rules hi-tech machines like computers and space ships. Uranus is on 9 degrees Taurus and that degree means “The ability to create inner happiness in dark hours”. This is perfect timing for ships to be in our heavens.

On December 25, 2019 there was a solar eclipse in Capricorn with six planets in Capricorn plus the moon. Capricorn is ruled by Saturn which is the Karmic planet; that is why the year 2020 has been so chaotic and hard to move through. The year 2020 has been a double 20 which is the Tarot Card of Judgment. We have been in double judgment this year and this is why I am hoping 2021 will be a better year. The number 2021 add up to the number five and that number is the number of feminine energy and change. The five pointed star symbolizes the planet Venus, the Goddess.

Pluto rules Virus, and Jupiter has been in the same sign as Pluto for one year and Jupiter is a very large planet. This means that the Jupiter energy will be off Pluto in 2021 so the Virus should disappear. Saturn and Jupiter will be on 0 degrees Aquarius on December 21 and this will create an entirely different energy for the next year. We will be entering the true beginning of the Age of Aquarius. Remember the song “This is the dawning of the Age of Aquarius”? I loved that song. The very beginning of the Age of Aquarius was on February 3/4, 1962 when all the large planets lined up in the sign of Aquarius. Then we had the roaring sixties and freedom started to rule. It was the energy of the Love children. Now 58 years later Jupiter and Saturn are entering Aquarius together and will start to bring in Aquarian energy.

Now Uranus, the ruler of Aquarius, is in Taurus which rules money so there may be unexpected events with money. We will also have more riots or demonstrations. People want freedom from control. It is like the Moses Drama where Moses says “let my people go, they want freedom.” This is why there are so many demonstrations. The riots have been both peaceful and destructive. We have been in the year of destructive riots because the planets have been in Capricorn and Pluto rules destruction or breakdown and that planet is still in Capricorn. Uranus is over the West Coast and that is why so many riots have been in Seattle and Portland. California and Oregon have had massive fires. Mars rules fires and Mars will be in Aries (a fire sign) until January 6.

We experienced smoke in Seattle. We had to keep our doors and windows closed during the heat and put filters on our fans so the filters would pull out the smoke. The air quality was very bad for a long time. We had 10 days of darkness in September because the smoke hid the sun part of the time. The smoke first started on September 10 and ended on September 20. I was very grateful to see the rain. It cleared the smoke away. It rained really hard on September 23 and it was wonderful. The trees and plants were very happy to see the rain too because we had a very dry summer.

I feel for all the people who endured the fires in Oregon and California this summer. That was really hard. We also had a large fire not too far from where I live and it burned up a community. I cannot imagine the trauma so many people went through when they lost their homes and everything they had. Thank goodness most people survived the fires. I send love to all these people who have suffered so much including those who have caught the Virus. Many people have died from the Virus. I know some people who have caught the Virus and survived it but still feel symptoms from it.

A good friend of mine died in August just three days before her birthday. I miss her. We had been friends for many years. She died from Cancer but she also had the Virus when she was in the Nursing home and survived that illness. She was in much pain when they sent her home. Her sister came out here from the East Coast to take care of her after she was sent home from the Nursing home. Thank you Marilyn and bless you Pat on your new journey.

We will be on a new journey soon as we move into the New Earth energy. Maybe we will just wake up on a higher frequency Earth. The plants, animals and the beautiful flowers are already there for us to enjoy. I look forward to living on a planet of love and happiness. It will be a whole new reality where anything is possible. We will then be able to manifest anything we choose to create. Love and blessings to all of you.

We have 1780 guests and no members online