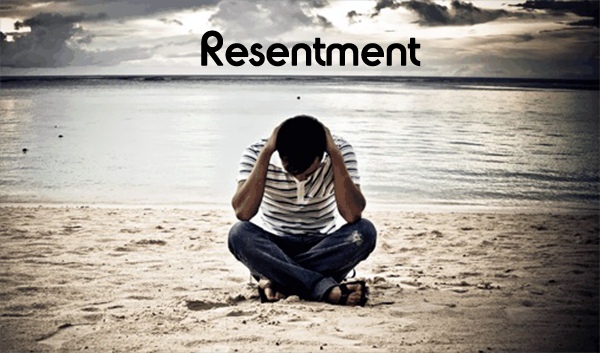 Resentment is high on the list of illness/trauma/”accident” triggers, and this post offers some excellent tools for recognizing how resentment grows and why. It also offers eight powerful questions to ask yourself as a way of becoming more conscious of the Shadow — where resentment often hides — so that you can release the toxins before they wreak their full havoc in your life. Some language warning for those with sensitive “ears,” but this is a highly recommended, contemplative read for anyone wanting to take proactive steps on all levels of healing.

“When you resent a man, you become his slave. He wrecks your meals, destroys your peace of mind and stalks you everywhere. He is with you when you’re awake and invades your dreams when you sleep. He’s beside you when you’re at work and goes along on your vacations. He might even steal your last moment of consciousness before you die…” – Anonymous

Resentment is a feeling of bitter indignation for having been treated unfairly, a judgment that others have hurt us or fucked us over or haven’t done enough for us. It arises because anger isn’t expressed and discharged directly, as an immediate emotional-energetic response to some event that is happening in the present. When the energy of anger remains bottled up, it keeps re-feeding on itself, or regurgitating, and turns into resentment. That is the root of the word resent, to re-feel the original pain without discharging or releasing it. Because the emotional energy remains bottled up and festers, when a person we resent does something that annoys or hurts us, we tend to over-react even when it is something minor because it is not really about what’s happening in the present, it’s a re-hashed, confused jumble of memories and partly felt emotions of other imagined or real offenses all piled into a single maelstrom.

Nietzsche (who used the French word ressentiment not because the word was special but because there was no German equivalent) gave resentment a highly idiosyncratic and provocative definition as a victim-consciousness that needs to project one’s own inadequacies and failures onto external scapegoats. Ressentiment arises as a defense mechanism that helps to protect the “weak” from seeing and acknowledging the part they play in their own unhappiness. The orgy of blaming others provides a temporary high to alleviate their pain. Nietzsche also stresses the etymology of the word – so resentment is characterized, first of all, by an inability to discharge emotions directly. By contrast, “strong” individuals who are free from resentment are able to discharge emotions fully and to express anger when necessary. Secondly, and this is a characteristic that’s specifically Nietzschean but also has some vague affinities to Buddhism,resentment arises from an inability to either integrate life experiences (including painful ones) into an ongoing project of self-expansion, or, alternatively, to simply forget about those experiences that prove unusable, the waste or refuse. The strong and noble types have a capacity to alchemically transmute negative experiences by overcoming them, or by forgetting all the petty hurts and insults that would derail them from more important things in life. In other words, they have short memories. Resentful types have an elephant’s memory and are constantly adding up all the wrongs committed against them, which builds up into a paranoid sense of victimization, and justifies all kinds of spiteful thoughts and actions.

Gurdjieff expressed a similar idea with his notion of “internal considering,” which is a particular kind of resentment that is based on making presuppositions about what others think and feel about us – and of judging that we are unappreciated, insufficiently valued, or inadequately respected by those others. Internal considering adds up the balance sheet of the plusses and minuses of life and says “you owe me, asshole.” Behind resentment and internal considering lies a lot of repressed anger, pain, and hurt – and sometimes it is for real offenses, and anger can express a positive and healthy desire to maintain boundaries, to not be invaded. But because of the long-term chronic regurgitation, resentment is exaggerated and has lost contact with reality and with the original offense and the corresponding emotion.

There are two ways of releasing resentment. First, by reprocessing the original offense (which is more effective when tapping into the memory while in a trance meditative-state) and expressing the anger, sadness or pain until it feels fully discharged and it begins to release the stockpiled negativity that we’re unconsciously holding onto, both in our bodies and our psyches. And secondly, by engaging in an analytic form of shadow-work and arriving at a recognition that a lot of our resentments are based on projections about others that exaggerate their negative traits and flaws, and that the images we have of those others are often cover-ups for our own disowned selves. We have the power to change our images of other people and the feelings we associate with them. A deeper self-understanding (of our multiple selves, exiles and shadows), and of how we ourselves are often swayed into unconscious reactions and mechanical behaviors, makes us more sensitive and tolerant of other people’s foibles, mistakes and automatisms, even when they hurt us. 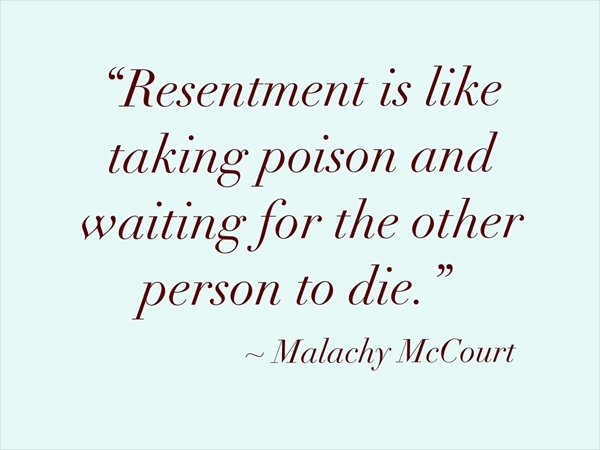 I don’t believe releasing resentment is about forgiving, which is one of the syrupy catch-phrases found in a lot of spiritual literature. Forgiving is a condescending attitude of “you are flawed, but I’m willing to let it go because I am better than you.” For me releasing resentment is based on recognizing that it’s a destructive, illogical habit of drinking poison and expecting the other person to die. In this sense the release is a mechanism of cleansing oneself and of restoring a sense of health and balance by discharging those emotions that haven’t been adequately processed in the past. Secondly, the release is about recognizing a shared pain and vulnerability that can tap into a feeling of genuine empathy with the other. It also involves a deeper recognition that our wounds, both those that are self-inflicted and those that have been caused by other people, have made us stronger and contributed to who we are today – that the “negative” has had “positive” ripple effects in our lives. Transcending the categories of good and evil is the real “revaluation of values” achieved by the practice of releasing resentment.

*This is a fragment from the introductory text for week 8 of the 10-week group workshop that I’m currently organizing in Berlin. One of the workshop exercises for releasing resentment is creating a chart that paints a composite portrait of what we feel for someone we’re intimate with (parent, sibling, friend, former or current lover) but simultaneously resent.

These are the 8 columns of the chart:

Column 1: What are the most negative personality traits I dislike about [ ]?
Column 2: What emotion do I feel when I think of these traits in [ ]?
Column 3: Which of my primary selves feels judgmental/disturbed by these traits?
Column 4: How are the negative traits I judge in [ ] also manifested in me, and who sees me as having these traits? Are they projections of my shadows?
Column 5: What positive side do these negative traits have, first in themselves (in the sense of the positive desire that are latent in them) and, secondly, in terms of their effects on me?
Column 6: What are the most positive personality traits I admire about [ ]?
Column 7: How are the positive traits of [ ] related to the negative ones above?
Column 8: How are these positive traits also manifested in or expressed by me?

back to top
Meeting Our Past Selves Outside Of Time
Guilt and Fear in Highly Sensitive People
Riddle: Is the Truth a Lie?

We have 1568 guests and no members online