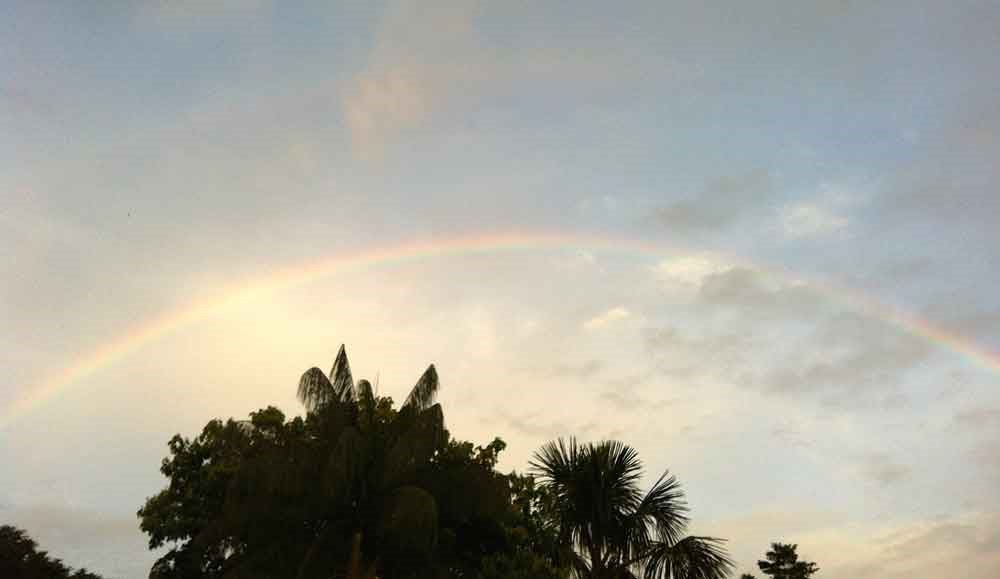 Norse mythology (Scandinavian) tells us about a Rainbow Bridge made up of three colors which connected the heavens with earth. The gods would cross the bridge to communicate with mankind. The bridge is described as luminous. It is protected by the ever-vigilant guardian Heimdall, who scarcely ever sleeps. Eventually evil giants breach the guardian's defenses and the Rainbow Bridge is destroyed, smashed into a thousand pieces under the giants’ weight.

A Navajo legend of North America recounts how the First Woman, the Goddess of Earth, gave birth to a son fathered by the Sun-God, and a second son fathered by the Water-God. The two sons become known as The Twins. An evil giant arrives on earth and devours all the human beings but falls in love with First Woman. She hides her very young twin children underground to protect them. When they grow up, they want to go and search for their respective fathers. However the earthly realm and the realms of the Sun-God and the Water-God are separated by great canyons where the cliff walls clash together and might crush anyone who wants to cross over. Nevertheless, the Twins set forth on their journey and, with the help of Spider Grandmother and her powerful magic, they arrive at the canyons. There, a beautiful rainbow appears, creating a magnificent bridge for them to cross over the abyss to the abodes of their respective fathers.

The Navajo and Norse legends are two presentations of the same story: the Norse legend focuses on the gods traveling from the heavens to earth whereas the Navajo legend focuses on the Twins traveling from earth to the heavens in search of their fathers. In both legends the crossing over from one realm to the other is done via the Rainbow Bridge. Depending on the point of departure, one can travel in either direction.

In the Navajo legend, the Sun-God and the Water-God descend to earth to father the Twins - creating human life with First Woman. While this myth does not mention how the Water-God and the Sun-God crossed over the great canyons, we know from the Norse legend that the gods traveled over the Rainbow Bridge on their way to earth. So it is reasonable to assume that Water-God and Sun-God also traveled over that bridge to find and make love to First Woman.

On the other hand, Evil Giant (singular in Navajo, plural in Norse) descended for the annihilation of life, destroying the Rainbow Bridge and eating all human beings once it had set foot on earth (Navajo legend). The only survivors, First Woman and her Twins, lived in loneliness - she with the Evil Giant, and the Twins hidden beneath the ground for their safety. No form of human relations existed anymore. Only fear and oppression remained.

When there were humans on earth before the arrival of Evil Giant, the language that flowed between heaven and earth must surely have spread. With the Rainbow Bridge destroyed, the language that connected heaven, earth and mankind was lost. It became the Forgotten Language.

To reconnect to it, the Twins needed to go on a journey. But they had lived underground since a very early age and had lost the path of return. They were unable to find their way to their respective fathers, the Water-God and the Sun-God. 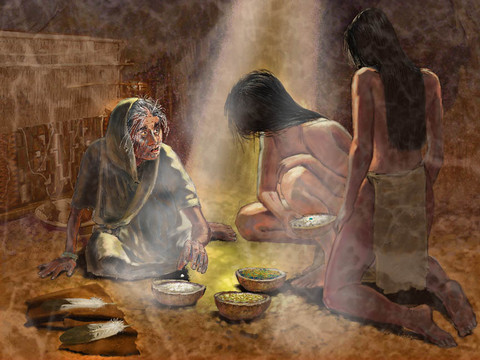 It was only with the help and magic of Spider Grandmother that they succeeded in making their journey.  Spider Grandmother represented the archetype of the Great Mother, the matrix of creation before all things came into existence. The Twins needed to turn to that primeval archetype and by reconnecting to her Ancient Wisdom, they could bring about the re-emergence of the Rainbow Bridge.

Once the Rainbow Bridge was open on both sides, it channeled through its core the energies of heaven and earth in a luminous light. This light was related to the element fire – not the fire that consumes but rather a type of fluidic fire with the ability to embrace and transport the one who comes across. The Rainbow Bridge was the image of the coming together of the earth and the heavens in Unconditional Love.

Were we ourselves, at a certain point in history, the guardian Heimdall and were we run over by the Evil Giants because of our lack of strength or vigilance?

Are we today, at this point of history, seeking to reconnect to our origins, as were the Twins in the Navajo legend?

And what deep Ancient Wisdom do we need in order to find the way to the Rainbow Bridge and have it re-emerge again?

Thank you!
ॐ Namasté - Blessings!
"Life is an echo, what you send out comes back."
© 2008-2022 crystalwind.ca. All rights reserved.
Why we cry
Redefining Luxury
Blowing the Whistle, Chpt. 5: Tracking the Crack in the Universe (Loosh 101)
Get This App Now!