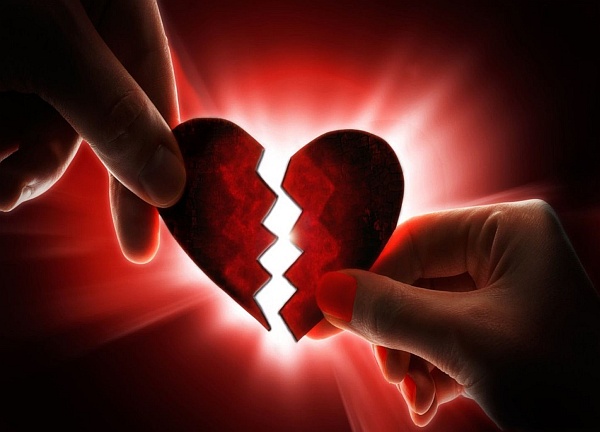 The full moon on Thursday, December 12, 2019, at 19° Gemini is the last moon phase before the December 26 solar eclipse. So it is time to finalize, complete and consolidate, and get ready to draw a line under the last six months.

Sun opposite Moon brings your home, family and intimate relationships into sharper focus for the following two weeks of this moon phase. Opposing forces such as work versus home, or what you need versus what you want, create inner tension and external pressures. This can lead to conflict and crises that drain your energy.

The December 12 full moon at 19°51′ Gemini occurs during the rare triple conjunction of Venus, Saturn, and Pluto. So Venus love and money will be a major focus of this moon phase. And for most people, it will be a difficult two weeks with Saturn creating delays and restrictions, and Pluto bringing fear and crises.

Not only does this full moon occur at the same time as the triple conjunction, but it is also directly linked by quincunx aspects. These uncomfortable and unpredictable aspects are shown as green lines in the chart below. They indicate a rise in tension toward a tipping point, where an adjustment must be made in order to restore the karmic balance. 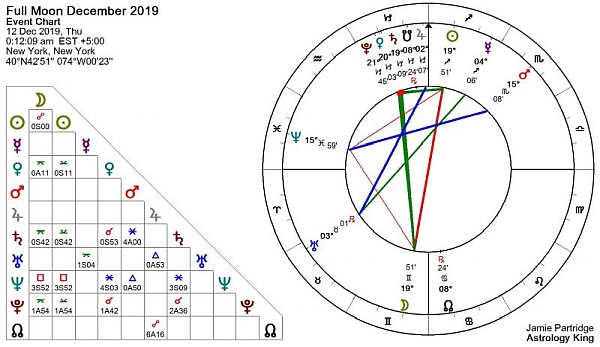 Venus conjunct Saturn makes it harder to express love and affection, and easier to be cold and mean. You may experience isolation, sadness, privation, relationship problems or financial hardship. If money is tight, events may force you to liquidate assets and learn to budget.

An existing relationship may be tested by distance or separation, and a general inability to connect at the emotional level. Issues involving guilt or disloyalty may be the source of the problem. But a healthy relationship will easily pass this test. In fact, this karmic trial may even lead to greater respect and commitment.

Venus conjunct Pluto dramatically increases your need for love and affection. You want to experience companionship at a deeper, more intense level. Greater power to attract friends and lovers can be difficult to handle and can also be abused. But manipulating others by guilt-tripping or other subversive tactics will have karmic consequences.

Other behaviors to beware of include possessiveness, jealousy, infatuation, and spying. There may also be a tendency to fall for negative or dangerous types of people like criminals and heavy drug users. Full Moon December 2019 brings the potential for instant attraction. Such a romance could lead to a profound and karmic relationship, but openly giving love and affection without catches is the key to true love.

Saturn conjunct Pluto is exact on January 12, 2020 but is already an extremely powerful influence. It represents hard work and serious business. You will need patience and determination as you face extra responsibilities with less time and resources to get the job done.

Events and people will force you to concentrate your efforts on one particular area of life that is no longer working well for you. You may experience loss, hardship or disappointment as you learn what it is that you must let go of or change. If something is broken you must fix it or throw it out. You cannot leave things as they are and resist the powerful forces that are at play.

Moon quincunx Venus creates tension from an imbalance involving emotional support and love. The amount of love received is different than the amount given. As relationship tension rises, a critical point is reached where something must happen to restore the balance. This can range from an argument to a love affair.

Moon quincunx Saturn makes it even more difficult to maintain harmony in intimate relationships because of emotional coldness, feeling of guilt and fear, or having to attend to other responsibilities. A heavy work or study load, a marriage breakup or illness in your family could leave you feeling emotionally vulnerable.

There may be an imbalance between your personal and professional life, or between your emotional needs and the needs of others. Self-control, patience, dedication, trust, loyalty, and forgiveness will help restore inner peace and relationship harmony.

Moon quincunx Pluto further amplifies the anxiety and intensity in your emotional life. Your subconscious may override your rational mind so that you say something without knowing why. Your intense moods could lead you to withdraw into a world of your own. There is also the potential for your fears and worries to get out of control and cause strange behaviors.

Guilt, fear, jealousy or possessiveness could escalate into a personal or relationship crisis. However, you could also gain a deeper psychological understanding of human nature and relationship dynamics. Finally, full moon December 2019 is good for uncovering secrets, solving mysteries and understanding esoteric subjects.

The star map below shows the December 12 full moon in the Horns of the Bull, the Constellation of Taurus, even though the Moon is in the Sign of Gemini (19 ♊ 51). This is because the Precession of the Equinoxes has moved the Sun Signs nearly a whole Sign out of alignment with the Constellations from which they were named, over 2000 years ago.

And, even though the Moon is in Constellation Taurus, it is not aligned with any major stars in that constellation. In astrology, fixed star conjunctions are calculated by longitude, the degrees of the zodiac along the ecliptic.

So it is possible for stars in northern and southern constellations to be conjunct a planet. and therefore be more important than stars in the ecliptic constellations. In this case, the full moon December 2019 astrology is influenced by Bellatrix below the ecliptic, and to a lesser degree by Capella above the ecliptic. 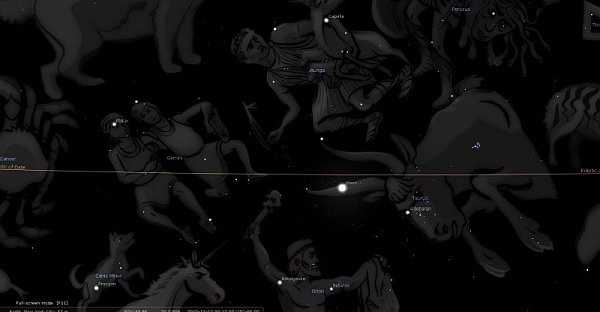 But when not so well aspected, like it is for the December 12 full moon, Bellatrix gives aggressiveness, belligerence, a tendency to fight futile or lost causes, and danger of sudden dishonor.

Bellatrix is especially strong for women, giving good fortune, assertiveness, and a “mighty tongue”. [2] But to men, of course, this appears as nastiness and bad-tempered aggression.

Bellatrix conjunct a full moon gives great power, honor, wealth and luxury, distinction through courage and honor in martial matters as a soldier, surgeon or metal worker. But with this full moons challenging aspects, it can also bring lust, vain ambition, waste, ruin, and blindness by accidents. [3]

Constellation Orion the Hunter gives a strong and dignified nature, self-confidence, inconstancy, arrogance, violence, impiety, prosperity in trade and particularly by voyages or abroad, but danger of treachery and poison. [3]

The 19th Chinese Lunar Mansion The Net (08 ♊ 44 to 23 ♊ 58) is a lucky mansion governs hunting, wealth, military prowess, traitors, deserters, outlaws, revolts, punishments and border disputes. It is good for construction, with building bringing fortune. Burials will confer honor to the deceased. Favorable for weddings, and children born of a marriage now are assured of a long life. [4]

Saturn conjunct Pluto is the biggest news in astrology for years and is the single main influence over the next two months. It means serious challenges are reaching a crisis point where they must be dealt with. Hard choices have to be made.

The December 12 full moon quincunx Saturn-Pluto means the difficult problem will increase tension to such an uncomfortable level that an adjustment must be made to restore balance. Venus in between Saturn and Pluto means the problem relates to love and/or money. So I named this post “Love Crisis” but it could also be called “Financial Crisis”.

Full Moon December 2019 has special significance for women and women’s issues. Both the Moon and Venus have astrological rulership of women. Plus, the full moon is conjunct with the female warrior star, Bellatrix.

The real Amazons were a female-ruled community around Greece who fought ferociously against the wild hordes invading from Asia and bringing male domination with them. The Saturn-Pluto conjunction represents male domination and the patriarchal system. Venus comes under intense pressure at this full moon and Bellatrix gives women the power and courage to fight back.

A full moon has a relationship with the previous new moon. The November 26 new moon brought disruption from chaotic change and rebellion. But also the chance of power, money, and success if you react with forethought and strategy to the rapidly changing conditions.

The December 12 full moon lasts for two weeks up to the December 26 solar eclipse. This also means it is final moon phase of the current eclipse cycle which began with the fortunate July 2 solar eclipse. So it is time to complete long term projects, consolidate your gains and get ready to draw a line under the last six months.

The timing of the December 12 full moon in relation to the previous new moon and eclipses means any serious issues in your love life or finances could have been simmering for up to two weeks or as long as six months. The same applies to political, social and legal cases involving women’s rights, domestic violence, sexual abuse, abortion and the #MeToo Movement.

We have 1784 guests and no members online