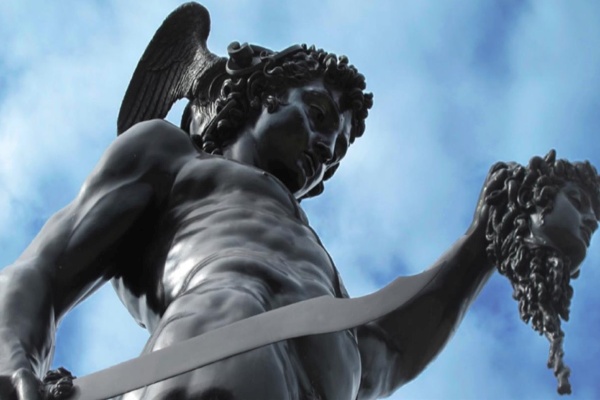 The Taurus Full Moon on Friday, November 19, 2021, is a partial lunar eclipse. It aligns with Algol, the most destructive star in heaven. It causes misfortune, violence, and sickness. So the spiritual meaning of the full moon November 2021 astrology relates to using honesty, faith, a strong sense of purpose to evolve your soul to a higher level.

The November 2021 full moon square Jupiter adds the risk of greed, immorality, irresponsibility, and excessiveness feeding into the destructive and brutal nature of Algol. But the lunar eclipse is also trine Pluto which encourages positive transformation and spiritual evolution. The lunar eclipse November 2021 astrology can help you access the deepest darkest areas of your subconscious, exposing them to eliminate fear and heal past trauma.

The November 19 full moon lunar eclipse at 27°14′ Taurus is square Jupiter and trine Pluto. This creates a four-sided aspect pattern created termed an Animated Figure. But probably the strongest influence on this lunar eclipse is fixed star Algol at 26°28′ Taurus. 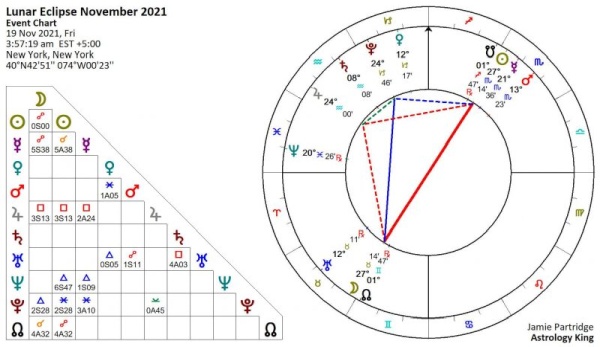 Like a regular full moon only stronger, the Sun opposite the Moon of a lunar eclipse brings your home, family, and intimate relationships into sharper focus. Opposing forces such as work versus home, or what you need versus what you want, create inner tension and external pressures. This can lead to conflict and crises that drain your energy.

Moon square Jupiter can make you hopeful and enthusiastic. But exaggerated emotional reactions and impulses can also bring carelessness, irresponsibility, and excessiveness. Loss and disappointment may result from blind faith, overconfidence, greed, and immorality.

You may experience changeable moods, and changing tastes can cause relationship difficulties. Disloyalty would very likely lead to embarrassment or scandal when exposed. A tendency to lower your standards if dating could also have the same result.

Generosity is a good way to avoid any moral decay. Charitable work would be fulfilling but make sure to leave enough for yourself. The lunar eclipse November 2021 astrology urges you to grow materially and spiritually but moderation and a responsible attitude are needed. Education, religion, or other forms of spirituality may help if you begin to lose faith.

Moon trine Pluto brings emotional sensitivity and psychic perception. You will feel things more powerfully and are likely to be transformed by your intense emotional reactions. A subconscious urge to evolve at the emotional level assists with the Jupiter urge to expand your horizons. It helps you focus your energy and grow in the direction that best aligns with your karmic destiny.

Psychological self-analysis is favored and you can access the deep, dark areas of your subconscious. You may also be driven to probe the feelings of other people and subconscious communication is possible. Intense emotional connections may result in new karmic relationships.

The quadrilateral aspect pattern created by the Sun, Moon, Jupiter, and Pluto is called an Animated Figure. [1] It helps you bring things to life, at the physical or mental level, using imagination, patience, and a lot of hard work. Repressed emotions are reactivated and made conscious and thoughts or memories are evoked.

The opposition (Sun opposite Moon) shows a strong either-or attitude. For example, you may rapidly switch from approval to disapproval. It gives a strong achievement orientation and attaches more importance to the acquisition of material possessions and the creation of forms than to communication.

The combination of challenging red and harmonious blue aspects brings respect from others and makes it easy to dominate people. The motivations are a thirst for action and practical thinking with energy and skill, or even “no gain without pain”. There is a constructive orientation towards adapting and modifying the status quo, and a desire to know what is what.

This configuration gives stability and balance that makes you feel safe. But it makes you very sensitive to tense or conflictive situations. New things are constantly learned from the oscillation between achievement and pleasure, between giving and taking, and between work and private life, so that what is possible is immediately put into practice.

The November 19 lunar eclipse at 27°14′ Taurus aligns with fixed star Algol, Beta Persei, at 26°28′ Taurus. As shown below, Algol represents the Head of the Gorgon Medusa slain by Perseus. 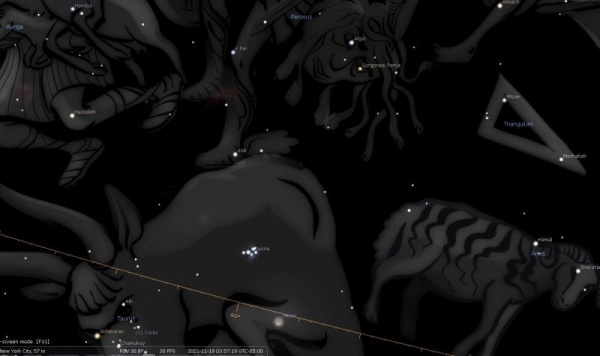 Fixed star Algol is of the nature of Saturn and Jupiter. It causes misfortune, violence, decapitation, hanging, electrocution, and mob violence, and gives a dogged and violent nature that causes death to the native or others. It is the most evil star in the heavens. [2]

Fixed star Algol has the nature of Jupiter, but it also has a long tradition as a trouble maker. It is said to be one of the most unfortunate, violent, and dangerous stars in the heavens. This is explained by the fact that Jupiter takes on all of its most perverse meanings: too much heat, as it were, resulting in extremist actions that undo all the beneficial qualities of this planet. [3]

In spite of the appreciable distance from the ecliptic, this double star’s influence is strongly felt and in more cases, it is a disastrous one. Primitive natives will be of the base mind with an inclination to brutality and violence. As everything has two sides, it has to be said that “high spiritual rays” are emanating from Algol also, but only those human beings can receive them who have already reached high spiritual development. Even then, it has to be noted that those particular persons will have difficulties and obstacles in their way, and they have to use much energy to overcome these handicaps. If their endeavors fail, strong counter forces and enmities will be present. [4]

What seems to have been missed by the old school is that Algol has a very positive side to it. How Algol signifies on horoscopes depends entirely on how the person concerned does or does not live life with an honest sense of purpose to it, a desire at least to try to live up to some kind of philosophy, religion or ideal. If that be present, then all will go well. This star prominent makes for an excellent counselor to others in the time of bereavement. [5]

I have found that Algol gives very distinctive facial features and hair. There may be a striking beard or glorious long hair. The teeth, nose, or ears may also stand out in some way, either extremely beautiful, large or deformed.

Constellation Perseus gives an intelligent, strong, bold, and adventurous nature, but a tendency to lying. [2] The constellation is indicative of events affecting large numbers of people, especially those events caused by major meteorological phenomena. [3]

The strongest influence on the full moon November 2021 astrology is the fixed star Algol. This most dangerous of fixed stars causes misfortune, extremism, brutality, violence, mob violence, sickness, and death. With the Moon, in particular, Algol causes extreme sickness, accidents, and severe injuries.

This eclipse is likely to have a detrimental effect on the coronavirus pandemic. Algol is also associated with genetics, mutation, and evolution. So the coronavirus will continue to evolve through new variants. If they are resistant to current vaccines then more sickness and death will follow.

The full moon square Jupiter will also exaggerate the other dangers posed by Algol. Greed, immorality, irresponsibility, and excessiveness will feed the extremism, brutality, violence, and misfortune.

But with honesty, faith, a strong sense of purpose, it is possible for positive creative forces and spiritual awareness to emanate from Algol. And the eclipse trine Pluto encourages positive transformation and spiritual evolution. The combination of Algol and Pluto gives access to the deepest darkest areas of your subconscious, exposing them to eliminate fear and heal past trauma.

The aspect pattern created by the lunar eclipse November 2021 astrology also exposes your repressed emotions and memories. The Animated Figure helps you bring things to life using imagination, patience, and a lot of hard work. It gives stability and balance that makes you feel safe.

The November 19 lunar eclipse together with the December 4 solar eclipse form an eclipse phase that lasts until the solar eclipse on April 30, 2022. If the full moon November 2021 astrology directly impacts your horoscope decan you can read about its effect in your monthly horoscope. For more detail about how it affects your natal chart see Full Moon Transits.

The partial lunar eclipse on November 19, 2021, is visible from North and South America, Australia, and parts of Europe and Asia. A partial lunar eclipse occurs when the Earth moves between the Sun and Moon but the three celestial bodies do not form a straight line in space. When that happens, a small part of the Moon’s surface is covered by the darkest, central part of the Earth’s shadow, called the umbra. [6]

We have 897 guests and no members online